Why is a specific flower offered to a Deity? 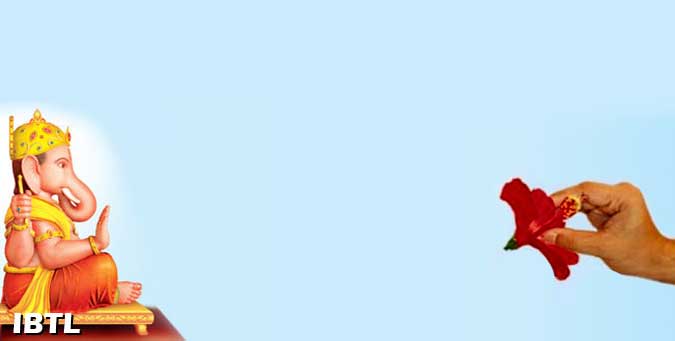 Some things in human life are beyond the realm of intellect. Modern science cannot explain them. And that is where the science of spirituality enters in the life of man! According to the path of devotion (Bhaktīyoga) ritualistic worship or pūjā is an important stage in process of worship! For performing ritualistic worship of a Deity filled with bhāv or spiritual emotion various tools and articles are required. Every article of pūjā has its own significance as per the science of spirituality or Holy Scriptures.

No pūjā ritual of a Deity is complete without use of flowers. If we know such things as which flowers for worship or leaves are to be offered to a particular Deity, in what numbers and their spiritual benefits then we will get more benefit from pūjā ritual. So let us see an important ingredient of pūjā articles namely flowers.

1. Importance of flowers in pūjā ritual

The subtle drawing of a red Hibiscus flower will help us understand this process.

The Gaṇēsh principle present in the universe gets attracted towards the central space of the red colored Hibiscus flower and is emitted in the form of circles.It is absorbed by the stem of the flower and gets emitted through the petals in the atmosphere.

Thus it is quite clear that the emission or projection of deity principles and pavitraks is a process taking place at a spiritual level. The effect of this process is multifold. One of this is reduction in the strength of Raja-Tama principle present in the atmosphere.

2. Why is a specific flower offered to a Deity?

Normally we have a concept that offering flowers to Gods and Goddesses is based on what he/she likes. But is it really so? Let us see the actual reason according to science of spirituality.

A flower has a particular color and a special fragrance. On a subtle level the color and fragrance particles present in the flower have a capacity to attract the principles of a specific Deity which benefits the worshipper. That is the principle behind offering specific flowers to a Deity and not because they like it.

To cite some examples of flowers and God, white flower like that of Dhatura is offered to Deity Shiva, red colored flower like Hibiscus for Srī Gaṇēsh, and red colored flowers for Durgā Dēvī also. If the worshipper has more spiritual emotion for these flowers then the frequencies of Deities get more activated through the medium of these flowers and work for the worshipper directly.

3. Why should one, offer only fresh flowers to the Deity?

According to religious scriptures on the science of spirituality, only proper objects should be offered to a Deity and the flowers are no exception. Therefore the use of dried out flowers or those infested with insects are prohibited in the ritualistic worship of a Deity. There are two reasons for this according to spiritual science:

Another important thing is that it is also prohibited to offer the flower which is already been offered (nirmālya) that is which has become stale. The basic science underlying this is that the flowers are used mainly for their colors rather than their fragrance. When the flowers become stale its color changes. As the color changes, the reception of frequencies of Deity decreases and later stops. Therefore we have to offer fresh flowers to a Deity on a daily basis after removing the flowers offered on the previous day. Besides this there are other prohibitions applicable to flowers to be offered to a Deity.

Thus it is to be noticed that such flowers when offered may be actually harmful rather than being beneficial. Therefore it can be seen that an appropriate substance when offered in appropriate form as mentioned in the scriptures to a Deity helps us to get more benefit of Deity principles and it also leads to purification of the place of worship.

Let us see some exceptions to the prohibitions

4. Why it is not advisable to pluck buds after the sunset?

The life cycle of the living beings runs according to the cycle of nature. Taking this into consideration the right time for everything in our life has been considered in Sanatan Hindu Dharma. Similarly there is definite time for plucking of flowers according to scriptures. Nowadays some people collect buds by plucking them on the previous evening. But this is incorrect as per the science of spirituality. Now let us understand why it is not advisable to pluck buds after the sunset.

At Brahma-muhūrt the pavitraks of Deities are projected on a large scale on to the earth. These pavitraks get attracted on a greater scale towards the flowers.The sunlight causes the disintegration of raja-tama particles present in the atmosphere. Therefore the atmosphere before the sunset is more sāttvik as compared to that after the sunset.

However there are some exceptions to this rule. For example there are some flowers whose buds start opening at the sunset itself like those of Bela, Chamēlī and Rajanigandha etc. These buds eagerly wait for the Brahma-muhūrt. It is as if they are eager to surrender themselves at the feet of the Deity. These flowers have more fragrance when compared to other flowers. That is why the Deity principles get attracted towards these flowers in large amount.

Now let us see the important rules of plucking flowers.

5. Which flowers should be offered to a particular Deity?

The spiritual science has also shown us that a particular Deity needs to be offered a particular flower in particular number. Let us understand this with the help of the points below.

Thus we have learnt about flower which is an important ingredient of pūjā material. We hope that you will bring into practice topics to which you are introduced while performing pūjā ritual by keenly paying attention and thus derive spiritual benefit out of it.