Vegetarian and Sattvik Diet is meant for us 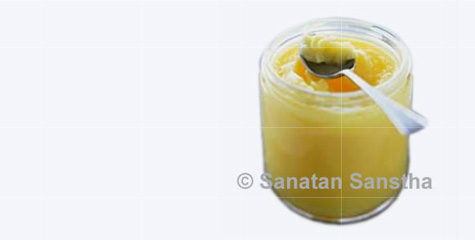 Consumption of sattvik food facilitates the absorption of Deities’ Principles. This purifies a person’s gross and subtle bodies and enables the body to absorb the waves of Deities’ Principles. It is beneficial to consume sattvik food on special dates as per lunar calendar (tithis) and festivals. Hence some non-vegetarians too refrain from consuming non-vegetarian food on the special tithis of their worshipped Deity or festivals.

Some sources of sattvik food:

1. Food cooked by a sattvik housewife: The trigunas (three components) of the person, who cooks food, influences the one consuming it. The touch of a sattvik woman’s hands facilitates the spread of sattvik vibrations in the food, thus making it sattvik. Such sattvik food which is devoid of Raja-Tama is tastier. Obstacles created by harmful energies in the digestion process are also removed.

2. Consecrated food (Naivedya) offered to God: In the food items prepared as a part of consecrated food, pure ghee is used instead of oil. The ingredients  such as chili, spices and similar . are Raja-Tama-dominant and should be  avoided while preparing consecrated food. When naivedya  is offered to God, it becomes charged with the waves of Deities’ Principles, thus becoming more sattvik. By consuming such food as Holy sacrament (Prasad), we benefit from the waves of Deities’ Principles.

3. Food prepared in Saints’ ashrams: As compared to other places, the proportion of sattvikta and Divine consciousness (Chaitanya) is greater in the ashrams of Saints. Here the seekers and disciples prepare food with an attitude of service. Hence this food becomes sattvik. Food is Absolute Brahma (Purnabrahma); if one consumes it with spiritual emotion (bhav), one derives Chaitanya.

4. Food given by Saints: When devotees visit Saints’ ashrams or when a Saint arrives in their home, they offer various kinds of food, fruits etc. to the Saints. These food items become sattvik and charged with the waves of Chaitanya. These food items are distributed in the form of Holy sacrament (Prasad).

Science does not give data on the effects of subtle aspects of food. If the food is vegetarian and sattvik, the mind and intellect become sattvik. Only sattvik food can enable us to perform Yogasadhana and attain God.  Through spiritual science one can know about the sattvikata of food.

To include sattvik diet, vegetarianism is of great importance.

Meaning of the word ‘Shakahar’, that is, vegetarian diet: ‘Shaka’ + Ahar = Shakahar. The meaning of the word ‘Shaka’ is ‘pure’. ‘Shaka’ means plant. Shakambarî is also the name of a Female Deity, that is, Devi. This form denotes that the Devi is present in vegetables. Substances such as milk, fruits, roots, bulbs and tubers are part of vegetarian diet.

Types of food according to the method of consumption

Why is vegetarian diet considered to be devoid of reproductive seed?

When compared to the animal species, Tama-dominance in the plant species is less. Vegetarian diet is one which is devoid of the capacity to give birth to new beings through sexual contact. These do not have desires or emotions. However, new beings sprout from them. Hence, such components are known as ‘those devoid of reproductive seed’. From the perspective of Ayurved and Spirituality, vegetarian diet is of utmost importance.

Men who acquired prominence in various fields in western countries, such as George Bernard Shaw, Plato, Socrates, Aristotle, Tolstoy and others were all vegetarians. Modern science has established the undisputed supremacy of vegetarian diet.

to be continued at Why does vegetarianism signify abiding by Dharma?
Related links :
# Agnihotra: The solution to prevent effect of nuclear radiation!
# How do the colour and design of the clothes affect the person
# Largest Hindu temple on planet - Virat Angkor Wat Ram temple
# Why namaskar, not hand shake: Spiritual benefits of namaskaar
# Arrangement of Deities In Temple Room and Queries about Aarti