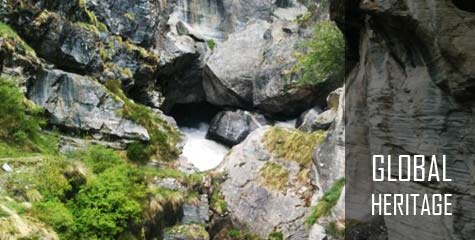 With the Global Heritage Fund planning to set up the Indus-Saraswati Heritage Centre in association with the Maharaja Sayajirao University of Baroda, the mystic River Saraswati has once again become the focus for passionate research. Noted archeologists and researchers like Jagdish Gandhi have a treasure of knowledge to share with us…

Shri Panchami or Basant Panchami is celebrated every year in January-February as the day of Saraswati Pooja with beautifully crafted idols of the goddess of learning and knowledge. It will be celebrated on January 31, 2009

“The Indus-Saraswati Civiliation in Mohen-jo-daro, Harappa and Lothal was the earliest urban society with a bustling economy that worked on the principles of democracy and prosperity. It had several flourishing industries and there is little or no evidence of continuous warfare or conquests with other contemporary civilizations in Egypt or Mesopotamia which were built around conquest and wars. It is thus not only the oldest known pre-historic culture of the world, but also attracts international researchers because of its theme of peace and progress,” says Kalpana Desai, India Director of the Global Heritage Fund based in the U.S.A., “The Indus-Saraswati culture was extraordinarily innovative and rich in entrepreneurship and promoted technological excellence in various products – specially jewellery. The processes of cutting precious stones and making intricate jewellery are comparable to modern designs! It traded extensively with faraway lands from its wonderfully built huge ports. Sixty to eighty thousand people with various skills lived in every city which was well designed and had good water supply and drainage systems.

“But around 4000 years ago, it is believed that this civilization died out without any proof of war or devastation. Researchers’ conjecture is that a huge earthquake or tectonic movement of the layers of the earth took place around that time and the River Saraswati changed its course towards the east leaving the rest of its waters to pool into lakes in Gujarat or vanished into the Rann of Kutch and the deserts of Rajasthan. Thus the glorious civilization, with its dependence on water for trade and living, shifted possibly to the fertile plains of the Ganga and Yamuna and became an agricultural rather than industrial community. The new initiative will form a collection of the coins, the artifacts and the archeological remnants of this cultural miracle to be housed in a world class centre with a museum and a research laboratory in Baroda within the next few years.”

This is not the only initiative by archeologists and researchers to track the ancient basin and intermittent streams and pools of the River Saraswati, which once flowed from the Himalayas to the Gulf of Cambay. The Government of India has set up a huge initiative to track the flow of the river and establish the truth about this magical nerve centre of India’s original civilization, a river that has been deified as the Goddess of wisdom and learning. Much work has been done with excavations and re-digging extinct of water canals as well as satellite tracking of its underground waters and pictures of its remaining streams and pools.

Additionally, Dr. Jagdish Gandhi, a unique researcher with an unparalleled passion for the Saraswati, has walked through the extinct basin and located some of the streams of the lost river and brought fascinating new facts and nuggets of knowledge into limelight. He says that many highly-cultured communities called Saraswats lived on the banks of the Saraswati and that over the millenniums after it vanished, they scattered all over India – and lived in Bengal, Kashmir, Uttar Pradesh, Rajasthan, Maharashtra, Karnataka, Kerala and Goa. Even today, they continue to follow their ancient culture and still venerate the lost river as their cultural mother and the goddess of knowledge, learning and wisdom. Dr. Gandhi has traveled to every mountain and valley where remnants of the Saraswati can be seen and has built a huge body of pictures, videos and documents about the river.

“Even an illiterate Indian knows that the River Saraswati is ‘gupt’ – meaning ‘invisible’ – but definitely present in the waters of the Yamuna and joins the Ganga to make the holy Triveni Sangam in Prayag. My research – as that of other scholars – shows that the Saraswati rose in the Yamdhar Glacier in the Himalayas, barely five kilometers from the sources of the Yamuna and Ganga as the crow flies. She flowed as a beautiful stream in the Doon Valley and then gushed through Uttaranchal, touching Yamunanagar in Haryana and Sirsa, Hanumangarh, Suratgarh and Anupgarh in Rajasthan. Passing through the tri-junction of south-west Rajasthan, Kutch and the border of south-east Pakistan, the left arm of Saraswati entered Gujarat, where she emptied into the Gulf of Cambay.

The Indus and the Saraswati served as the major trade routes for the pre-historic cities of Mohen-jo-Daro and Lothal. As is well known, the huge tectonic upheaval which happened around 4000 years ago changed the course of many rivers in India. The earthquake-like calamity erupted in Kutch and spread through the desert of Rajasthan to Delhi via Jodhpur and traveled finally to the foothills of the Shivaliks, striking Kurukshetra, Ambala and Ropar.
Thus, the Saraswati reverted to the Yamuna channel flowing nearby. Consequently, the Yamuna too shifted its course progressively from time to time, from Govardhan to the Mathura of today. I also believe that from the description of the Saraswati in the Rig-Veda, the present day Tons could well be the remnant of the river. The scriptures say that Saraswati burst through the mountain boulders with an unimaginable force and cascaded down the slopes. The Tons matches this description accurately.

“I also believe that many present day canals in the heart of India, built for the purpose of irrigation in the river systems, have followed the basin of the dried up Saraswati. Satellite pictures show small streams in this basin and these could be the remaining waters of the lost river. There is reason to believe that the Nal Sarovar, today a popular tourist attraction for its magnificent bird life and pools set in the midst of a variety of rushes and water plants, is formed by the last still waters of the Saraswati. The Nal Sarovar spreads over an area of 123 sq km. The surrounding swamps and forests attract birds of all species. More recently, when a devastating earthquake hit Kutch in January 2001, I went to the area and was surprised to find sweet water gushing out of the land in the Rann which is full of salt and sea water. This water was sent for analysis at a government laboratory and found to be more than 5000 years old! Though no conclusion can be drawn, it is proved that Kutch is an earthquake prone area and that there could be sweet water streams from lost rivers or reservoirs lying underground in this otherwise barren area.

“I have walked in the mountains towards the origin of the Saraswati in the Yamdhar glacier and down the basin of the ancient river and have made a 35 minute film to record my experiences of the existence of the river which I refer to as the Vedic Saraswati. Recently, a shrine has been built at Adi Badri in Haryana where the flow of the Saraswati can be seen even today. Aside from this, the only place where a river is actually called Saraswati is seen close to Mana village near Badrinath Temple in the Himalayas where the roaring river meets the Alaknanda at Keshav Prayag. But I do not believe this river to be the original Saraswati.

“India is endowed with the largest water-bearing cloud system in the world in the monsoons. The Indian monsoon cloud, it is estimated, is the size of the entire Europe and this feeds innumerable rivers with their huge sweeps of tributaries to fertilise the plains of India. I have studied these rivers in great detail and presented reports to the Government of India and the concerned authorities to be alert about the steady decline of India’s main rivers like Ganga, Yamuna, Narmada, Godavari, Krishna and Kaveri and to consider planning a network of canals which would utilize the huge quantity of rain water that is presently wasted when it flows into the sea.

“The system of canals which I have suggested could also reinvent the basin of the lost Saraswati. Therefore, we will achieve two goals with the canal system. We will enrich the existing rivers and also reclaim the much-venerated Saraswati and establish its presence once more in our subcontinent. This will be a cultural triumph for us and help to bring pride to our young generations. To accomplish this, I have made a detailed plan-report for interlinking the rivers of India as well as a film for the Government and the scholars concerned. I am still working hard to find the complete basin and flow of the Saraswati and no doubt, in the future, will unearth more details about this magical river.

“I believe that the Saraswati, though lost today, is the key to the golden age of India’s culture. She is the thread which holds together all the beads of our culture and civilization. She offers us a continuous document of our ancient civilization. We should know everything about the Indus-Saraswati civilisation which surpassed all other contemporary ones in the world so many millenniums ago.

“We should be proud of our heritage and help in the re-discovery of a river that must be called the ‘Mother of Indian Culture’. No wonder, she is also called the River Dharini, the mother of prosperity!”
By Vimla Patil | esamskriti | [email protected]