Guru The dispeller of darkness or ignorance (Gurupournima) 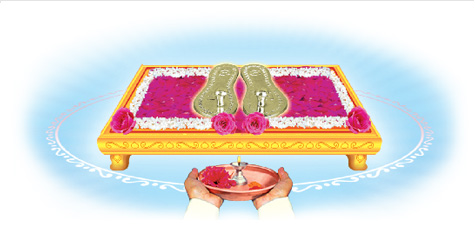 A foreigner asked a saint, “Could you describe the uniqueness of India as briefly as possible?” The saint responded by saying “The Guru-disciple lineage.”

This year festival of Gurupournima falls on 03rd July 2012. Gurupournima is the pure full moon day of the Hindu calendar month of ashadh (usually coincides with July of the English calendar). This day is celebrated every year to express gratitude unto the Guru Principle. The ArchGuru, Sage Vyas (founder of the Guru-disciple lineage), is worshiped on this day.

What is the need for a Guru? If we are unable to swim, then we need a boat to get us to the other side of the river. Similarly, to get across the ocean of life, we need a boat in the form of a Guru.

A disciple can progress spiritually through his own efforts. But his path to self-realisation or towards perfection becomes easy when he follows the teachings and is under the guidance of an able Guru. If a steamer reaches its destination in 4 hours, then a tiny boat tied to it also reaches the destination in 4 hours. But, if the tiny boat is separated from the steamer, it would take 12 hours to reach the same destination. Similarly, if we make efforts towards spiritual progress without taking appropriate guidance then we would require a long time to progress due to our personality defects and the mistakes we commit. However, under the guidance of an appropriate Guru we are able to cover the distance of 12 hours within just 4 hours. Hence, according to the Sanskrit proverb 'Mahajano yena gataha sa panthaha' (one should follow the path taken by great souls/people}; one should accept and get the guidance of a Guru.

When we visit a friend in a new town, if we do not know the address we have to enquire with someone who knows where our friend lives. Once we have the address we can easily find our friend's place. Similarly, only the Guru can give us the address of our 'true self' i.e. our soul.

When we cannot get in touch with a friend over the phone, then the operator helps us. Similarly, if we are unable to connect to God, the Guru removes the obstacles and connects us to God. What are the obstacles? The veil of Maya - the great illusion, which includes attachment to parents, siblings, wife, wealth, etc. The Guru releases us from these attachments and shows us Divinity or God.

Definition of Guru: There are various aspects to the Supreme God Principle. These various aspects of God perform specific functions in the Universe. This is pretty much akin to the government of any country which has various departments to facilitate the smooth governing and functioning of the country as a whole.

Just as we have a department for education in a government, which facilitates teaching of modern sciences throughout the country, the aspect of God that looks after spiritual teaching and spiritual growth in the Universe is known as the Guru. The Guru is the Teaching Principle of God. This is the aspect of God that performs the function of guiding us to grow spiritually. The Guru’s attention is fixed only on a disciple’s spiritual progress and not on his worldly happiness (as that depends on destiny). This is known as the unseen or unmanifest Guru. Guru principle pervades the entire Universe. The salient and highlighting feature is that the unmanifest Guru stands by us throughout our life and slowly lifts us from our worldly life into a spiritual way of life.

Out of the entire population of the world, few take up spiritual practice that is universal and beyond the confines of formal, organised religion. Among these, very few people through their spiritual practice (regardless of their religion of birth) attain a spiritual level of over 70%. The unmanifest Guru then works completely through some of these evolved individuals who are then known as the manifest Guru or the Guru in the human form. In other words, a person has to be at least of the 70% spiritual level to qualify as a spiritual guide or a Guru. The Guru in human form acts as a beacon of spiritual knowledge for humanity and is in total alignment with the Universal Mind and Intellect of God.

Though Saints and Guru may appear to differ in their physical appearance and in their guidance, the Guiding principle in them is from the same source. There are varied shapes of bulbs, when electricity flows through them only light is emitted from all of them. Since the mind and intellect of all Gurus is the Universal Mind and Universal Intellect, They are one.

How to recognize a fake or an unauthorized Guru?

80% of the Gurus in society are fake or with­out spiritual authority. Some of their features are enumerated below.

A. The Gurus who generate a feeling of inferiority in others and try to show off their greatness

One Saint asks everyone who comes to pay obeisance to him their name and age. Once that is told he says, “Both the answers are wrong. The name and age belong to the body. You are the soul. It has neither a name nor age”. Then he speaks on Spirituality and asks, “Are you doing spiritual practice?” If someone happens to reply in the affirmative, he asks “What spiritual practice?” If one replies, “The one recommended by my Guru”, he says “You were not able to answer simple questions about your name and age. Then what has your Guru taught you? Only a real Guru can reply to these questions. Come to me. I will tell you.” One should tell such fake Gurus, ‘Actu­ally your questions were meaningless! You asked me my name and age only because of your awareness of the body (dehabuddhi), so I too replied with awareness of the body’. What kind of Guru is he who is unable to make out at the first glance whether one has a Guru or if one’s spiritual practice is going on appropriately or not?

B. Those having attachment to money and women

He gives masterly discourses on non-duality,

But has intense attachment for sense objects.

Nothing shall be accomplished from such Gurus.

One Guru does not use a watch because he does not want to be bound by the restrictions of time and a watch strap. Yet after every fifteen to twenty minutes he asks others, “What is the time?” (!)

D. One who is desirous of fame

What should one do about fake Gurus? ‘Such Gurus found by the dozen should be summarily rejected.’- Shri Dasbodh 5.2.21

On this occasion of Gurupournima, may all be blessed with enthusiasm to move on the spiritual journey

Related links :
# Why does vegetarianism signify abiding by Dharma?
# Agnihotra: The solution to prevent effect of nuclear radiation!
# How do the colour and design of the clothes affect the person
# Why namaskar, not hand shake: Spiritual benefits of namaskaar
# Arrangement of Deities In Temple Room and Queries about Aarti