A modern degree in an ancient ritual : Art of Living's heritage school 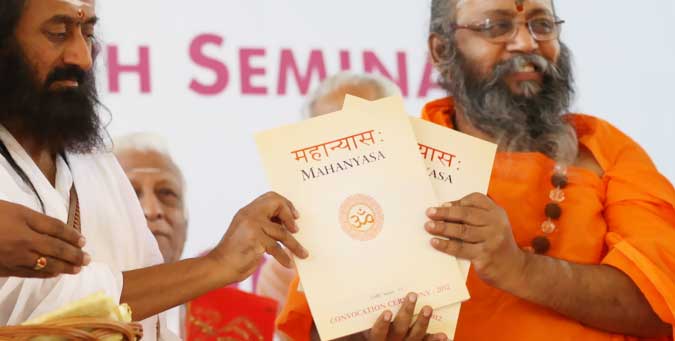 The ceremony began with lighting of the lamp by Sri Sri along with the other dignitaries. Reflecting upon the significance of the Sanskrit language and ancient rituals, he expressed, “Our country remains one because of ancient culture. Forty years ago when people of north visited south or from south visited north, they were not able to communicate with each other whereas Sanskrit pundits from south would go to Kashi and could converse with another pandit in Sanskrit with ease. Dr. Ambedkar wanted Sanskrit to become our national language.”

Inspiring the graduating students, he added,“Purohit means one who does good to mankind. All of you have got a chance to render such an honorable seva. There is no end to learning.”

Sri D.G Nandakumar I.A.S, Comissioner, HRI & CE, Government of Karnataka said, “Inspite of many religions of the world having come and gone away without a trace, Indian culture still continues to exist and leaders like Sri Sri contribute to this.

On this occasion two books ‘Mahanyasam’ and ‘Padamantram’ were released by Sri Sri and the Chief Guest , Sri Omkarananda Mahaswamigal.

Speaking on the occasion, Sri. A.S Sundara Murthy Sivam, Principal, expressed, “Students of our Patashala follow the traditional way of learning, coupled with the practice of breathing techniques. Our students learn this ancient knowledge with commitment, faith and respect. This commitment is carried out into the society when they graduate.

The Agama Pathshala was established in October 2002 by Sri Sri Ravi Shankar. The school offers a seven year training program that teaches students all over India how to conduct temple rituals: pujas, abhishekas and other rituals. The course syllabus also includes study of the Veda, Agama, Sanskrit language, Astrology, Yoga, music, Sculpture, Epics and Shaivic scriptures.

Along with these, the children are given training in practical modern subjects, such as a basic knowledge of how to work with computers. After completion of their seven year training, these pundits are ready to conduct services and rituals in temples and homes all across the country.

Art of Living Bureau of Communication