Vishal will live forever in our hearts ! 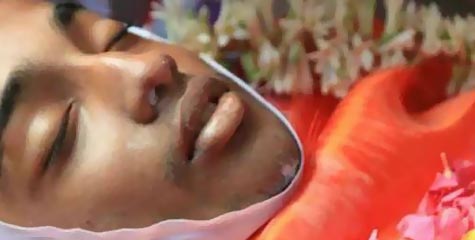 “Vishal, is in the critical care unit… and he is almost dead,” Kiran’s inconsolable sobs choked his voice. That call was from Chengannur Jilla pracharak, Kiran, late in the night on the fateful day, July 16. I had seen news flashes about a students’ clash at a college campus, near Chengannur, but didn’t give much importance to such skirmishes that are a regular affair during the opening days of colleges. But I came to know about the details of that incident only during the late night from Kiran. It was a planned attack on ABVP workers by the Campus Front goons. Campus Front is the students’ wing of the notorious Popular Front which is the re- incarnation of SIMI a banned terrorist organization.

हिंदी में पढ़ें : विशाल अमर रहेगा!
Vishal Venugopal was the Nagar Samithi member of the ABVP and the Nagar Shaareerik Sikshan Pramukh of the Sangh. He, along with the colleagues, had been to the Christian College to oversee the new comers’ welcome function organized by the college unit. Three or four Campus Front workers were also there. Everything went on smoothly till 11’o clock. Suddenly, a group of Muslim goons from outside came to the college gate and started abusing ABVP and Goddess Saraswathi. , Vishal and other workers tried to dissuade them from disturbing the function. They didn’t know about the real intentions of the intruders. All of a sudden, those goons from outside, unleashed an attack on Parishad workers with daggers, modern knives, and other lethal weapons. Vishal, Vishnu and Sreejith were severely injured. Vishal, who was also seriously injured, succumbed to death in the wee hours of 17th. Two other workers are still in the intensive care unit.

This was not an isolated incident. So many such incidents had taken place in the recent past, all of similar nature. Popular Front has been planning to unleash terror in the state for a long time now, and the particular fatal incident apart of their well thought out war strategy.

In its usual well planned manner for it trains intensively, the Popular Front had done away with its intended victim.
EThe other day, the Kerala state government has informed the High Court that Popular Front, which has connections with SIMI, is responsible for 27 homicides of RSS and CPM workers that happened in the state. In a Taliban-model attack on July 4, 2010, the right hand of Prof TJ Joseph was chopped off by activists of the Popular Front and its political wing Social Democratic Party of India (SDPI). The reason ? Joseph had allegedly responsible for setting up a question for a test paper in which he had purportedly blasphemed Prophet Muhammad. The NIA is looking into this case. The PFI ‘ court ‘ had found him guilty and passed a sentence of amputation.

Vishal was targeted : Vishal was a promising young worker of the Sangh. In his village, he strengthened the Sangh work and started new Sakhas in the near by villages too. He, through his incessant contact and campaign, had been cautioning Hindus about the evil designs of Islamic fundamentalists. He was instrumental in checking several love jihad attempts in and around that area. Jihadis, through several means, were trying to disturb the peace of village life. Alluring Hindu youths through different means, to engage them in anti- social activities like drug abuse and trafficking, is one among that. Vishal, with the help of other villagers, used to intervene and successfully defeat such attempts. He had been courageously campaigning against the growing communal menace with terrorist link, in campuses. These were reasons enough for terrorists to target that young worker. A jihadi court sitting some where had given the order to finish off this eye sore once and for all and those ruthless killers executed the decree.

A dedicated soul : Vishal’s dedication and devotion to the great cause of the Sangh ideology, was exemplary in the real sense of the term. He lived, worked and even studied for the Sangh cause, and through the Sangh for nation. He wanted to become a Pracharak as early as possible. It seems, he was always in a hurry. That was why he wanted to discontinue his +2 studies, even though he was a brilliant student. However, the Sangh Adhikaris didn’t allow him to do so. They quite naturally asked him to continue his studies and secure at least a PG. He resolved to do so, but it was an uphill task at that point of time, because only 45 days were remaining for the exam. Vishal couldn’t wait for yet another year. So he studied day and night for 45 days and completed all pending lessons and came out with flying colures in the exam. Then he joined Konni college for B.Sc. Electronics.

In search of Roots : Strange was his life history. Born in Saudi Arabia and he conducted his preliminary studies in London. But his tender heart was never reconciled to the materialistic life style there. He devoted his free time over internet not to indulge in modern fancies but to find out his Indian roots, culture, our sacred language Sanskrit, and the Holy Scriptures. Young Vishal took an oath to devout his life for the welfare of our culture and heritage. He found out through his endless pursuits that RSS was the one and only organization through which he could fulfill his dreams. Hence, he requested his parents to allow him to go to Bharat and live in their village so that he could study in a congenial atmosphere and work for the nation through the Sangh. His parents tried to dissuade him from his strange desire, but all in vain. He was adamant and the loving parents at last acceded to his wish.Thus he came to Bharat and started his second life for the nation. Parents unable to bear his separation for a long time, tried many a time to take him back to UK. With folded hands and utmost respect he implored them to allow him to continue to live in Bharat. His father, Venugopal , reminisces: “My son used to tell his mother that he might not be in a position to serve us both during our old age. That pained her a lot. When asked why he was telling so, his answer was quiet unbelievable for us,” the bereaved father tells. Vishal told that if  great patriots like Bhagat Singh, Chandrasekhar Azad and Swami Vivekananda had thought about their families and lived for their families, would we have attained freedom? His words and deeds were far beyond the range of a boy of that age.

Once he came to know that one of his friends was not able to join for higher studies due to lack of monetary support. Vishal hadn’t to think for a second time to sell his new motor bike and gave that money to that friend. Vishal was supporting 4 students from poor backgrounds to help them pursue their studies.
Renunciation is our national value : On July 15, he attended a Gurupooja function at a nearby Sakha. Just 24 hours before that fateful attack on him by the Jihadi terrorist, he was giving an inspirational boudhik to students. He referred to renunciation as the very natural characteristic of our nation. Hindus remember only such people who had offered everything at the altar of the nation the Mother. Swayamsevaks of that Shakha, who had heard that well- structured Boudhik, still recall each and every word of that Boudhik.

Thousands gathered at his funeral.His father and mother had flown down from the UK. Emotions of uncontrollable grief and irrepressible protest was discernible everywhere. After the funeral, the parents heard a song sung by their elder son in a low tone, Vipin, his elder brother, was standing near the pyre. Naturally both the parents admonished him, “how come you sing a song standing here in this condition. Is it not your brother who is getting reduced to ashes on the pyre?” Vipin, who was wailing in between, whimpered a reply: “This is not just another song, father. These lines were taught to me by my dearest Vishal- Jeevitham ambe nin poojaykkaay, Maranam devi nin mahimaykkaay-(This life, Oh Mother, is for your sevice, and death, Oh Goddess, unto your greatness).

This was his favorite Gana geetham hence I sang it, and take it from me mother, I’m going to live according to the spirit of that song hereafter.”
Two days later, one of the provincial Sangh workers visited the house. While talking about Vishal, his father told in the affirmative: “We were not Sangh sympathizers. Actually I was a leftist. But now my son through his life and dedication has changed my life as a whole. Everything that was his, according to him, belonged to the nation, and we too are going to work for the Sangh through the way shown by our dearest Vishal.

It brings forth a noble truth. No anti- national forces can douse the true spirits kindled by the Sangh. Islamic terrorists have been trying to create a fear psychosis among families through such heinous crimes. But they have failed before the resolve of steel of Vishal’s family members, coworkers and the peace loving society.

Vishal is not gone. He lives among us through his brothers in the Sangh. His message of selfless service to the Nation and the Hindu society has grown stronger. His memory will be honored by our selfless renunciation for the cause he chose to uphold. We will see that in place of one Vishal, the Jihadis will have to face a thousand.