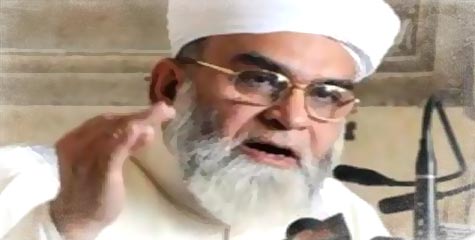 Rejecting the plea of Delhi Police to close a decade old criminal case against Shahi Imam of Jama Masjid Maulana Syed Ahmed Bukhari, a city court has issued fresh non-bailable warrant against him with a strict direction to execute the same within 10 days.

Reprimanding the police for its failure to execute numerous NBWs on previous occasions for all these years, Metropolitan Magistrate Rajinder Singh issued fresh NBW against Bukhari and remarked that such inefficiency could not be tolerated. The magistrate also rubbished the contention of Delhi Police that they did not arrest Bukhari fearing communal backlash as he represented a religious community.

Bukhari is accused of fomenting an unlawful assembly of people and forcibly obstructing public servants from discharging their duty in Lodhi Colony police station area in September 2001. A case was subsequently registered at Lodhi Colony police station but despite repeated summons, accused Bukhari did not turn up before the court, prompting it to issue non-bailable warrants. The court has also termed the initiation of his property attachment process as a mockery of law and directed SHO of Lodhi Colony to execute the NBW personally. It is pertinent to mention that Bukhari has also been declared a proclaimed offender by the court in this case even as he has been making public appearances on various occasions.

“In my considered opinion, declaring the accused Ahmed Bukhari as a proclaimed offender would be a mockery of law and it would provide an easy escape route to the accused. It is shocking to see that the police force is not able to execute the NBW issued against Bukhari. Such inaction on part of the police force cannot be tolerated,” said the Magistrate. The court also directed the SHO of Lodhi Colony to file a report on execution of the NBW.

The incident dates back to September 3, 2001, when Shahi Imam along with one Habibur Rehman and Nafisa led a mob near Lal Masjid in Lodhi Colony and forcibly prevented the CPWD authorities to raise a wall near the Masjid. The mob allegedly brought down the wall and also lynched the CPWD engineers and police officers. The wall was allegedly demolished to encroach upon the CPWD land to extend the mosque premises. On the fateful day, the other two accused persons were arrested but Bukhari could not be arrested.

Bukhari, however, claimed to be unaware of the issuance of the NBW though he admitted a case was pending against him. “I am not aware of any NBW issued against me. I have never been served with summons either. I know there is a case against me but I have not been involved in any illegal activity. I just stopped the Government from demolishing a mosque and graveyard that is built upon the land of Waqf Board which the CPWD claimed to be its property. If that is a crime, yes I did commit a crime,” Bukhari said when contacted over phone.

It is noteworthy that the police had in the past made several requests to the court seeking further time to execute the NBW against Bukhari. Exasperated over the non-execution of its orders, a trial court in 2010 even remarked that police officers upto the rank of Deputy Commissioner of Police had no courage to execute the warrants against Bukhari and directed the Police Commissioner to get the order executed. Despite this, the NBW against the religious leader could not be executed. To this, the court had said, “Is the accused above law that despite issuance of several NBWs against him since 2001, he has not been arrested.”

In March, this year, the police moved an application seeking permission for withdrawal of prosecution against the accused persons. The application said, “The Deputy Home Secretary of Delhi Government made a request to move the application as the Lieutenant Governor of Delhi being satisfied that it is in public interest.” The police’s plea was challenged by SS Omji, Chairman of a religious organisation, World Welfare Centre who vehemently opposed the withdrawal of the case and said the offence committed by Bukhari was definitely not in public interest.﻿