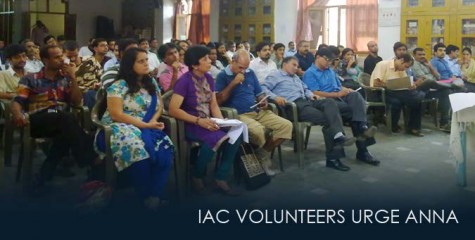 The voice of continuing the anti-corruption movement demanding Janlokpal is gaining more support from different quarters. Today, over a hundred volunteers from Delhi and other states met in New Delhi to emphatically declare their support for the movement. Volunteers who gathered here discussed on the merits of continuing the movement as opposed to forming political party as announced by some leaders of civil society.

A resolution to continue the movement apolitically was passed by all present in the meeting. It was also decided that some representatives from this meeting and volunteers from other cities will travel to Ralegan Sidhi to convey this message to Anna. They would also request Anna to separate movement from PCRF and establish a secretariat under his command. Madhuresh of NAPM said that, ‘Movement has not failed but there has been a temporary setback. Need of the hour was to retreat and reflect and come back stronger at a later time instead of initiating an altogether new step.’

Sunita Godara referred to the note distributed by Anna at Jantar Mantar citing Gandhi ji and repeated that movement has been called off in a haste and Anna should restart it. P V Rajgopal of Ekta Parishad who although was not present in the meeting but expressed support for this initiative.

# Shivendra Singh Chauhan's open letter to Arvind Kejriwal
Former core committee member Sunita Godara, Madhuresh from NAPM, social activist Rakesh Rafiq, online activist Shivendra Singh Chauhan, Chinmay Mohanty, Shriom and representatives from other social movements were also present in the meeting. Those who participated in this meeting included volunteers who had been part of IAC since its beginning in November 2010.