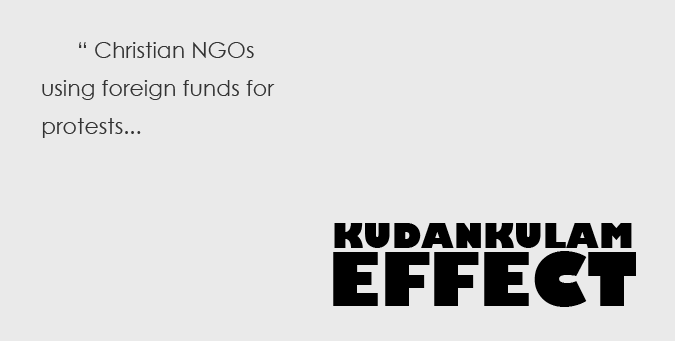 The Home Ministry has cancelled foreign funding of 4141 out of total 39236 NGOs registered under the Foreign Contribution (Regulation) Act, 2010. Accounts of 20 NGOs are frozen and 60 NGOs are prohibited from applying for foreign funds under the FCRA.

Govt stern action: Kudankulam Effect : The largest block of NGOs whose FCRA has been cancelled are based in Tamil Nadu. 794 NGOs from Tamil Nadu are about 19 per cent of the total FCRA cancelled NGOs. The basis for cancellation is termed as- ‘On Violation’ but it is fairly understandable that the NGO-led protests were triggered against the Kudankulam atomic power plant which is based in Tamil Nadu has prompted Government to wake up and act so heavily on foreign findings of NGOs which receive foreign funds for years.

This is the first time the Union Home Ministry has acted so heavily on the NGOs who survive on foreign funding. Notably it is considered that this stringent action has followed Prime Minister Manmohan Singh’s criticism on non-governmental organisations that receive support from abroad for leading protests against the Kudankulam nuclear power plant in Tamil Nadu.

In March 2012, the government cracked down on four NGOs for allegedly funding the massive protests that had paralysed work at the Kudankulam plant site in Tamil Nadu’s Tirunelveli district for weeks, and ordered a freeze on the bank accounts of some other NGOs.

The Diocesan Association received Rs 20.60 crore between 2006 and March 31, 2011, the Social Service Society received Rs 44.14 crore as foreign funds in the same period.

France was the biggest donor to Tuticorin Diocesan Association, contributing half of the total amount it received. France-based entities gave Rs 10.30 crore while Rs 5.15 crore came from Italy. The group got Rs 3.22 crore from Germany and Rs 83 lakh from the US, the FCRA returns show. As per Media reports, the NGO claims to have spent the maximum of its funds on maintenance of priests and preachers, welfare of orphans and on holding of free immunisation camps in Tuticorin.

Bishops’ foul cry of harrasment : Notably, Tamil bishops told government to stop ‘harassment’ Christians. In a statement issued by AM Chinnappa, archbishop of Madras-Mylapore and president of TNBC, said, "It is open secret that the central government is taking these actions against the Diocese of Tuticorin and other Christian NGOs, in the wake of the debate and dispute on the Kudankulam nuclear power project."

PM’s candid criticism : Dr. Manmohan Singh openly condemned suspicious role of foreign funded NGOs against the developmental projects build up in India. In February 2012, Prime Minister had said, “There are NGOs, often funded from the United States and the Scandinavian countries, which are not fully appreciative of the development challenges that our country faces.” Referring to the protests at Kudankulam, he said, “the atomic energy programme has got into difficulties because these NGOs, mostly I think based in the United States, don't appreciate need for our country to increase the energy supply.”

In its Press Release on 14 March 2012, Home Ministry press statement explained that, “Besides FCRA, 2010 and FCRR, 2011, various laws such as Unlawful Activities (Prevention) Act, Prevention of Money Laundering Act, Indian Penal Code and State Local Laws were added to monitor the functioning of Associations/Trusts for curbing anti-national activities in the Country.”

NewsBharati assessment : NewsBharati randomly reviewed some NGOs from the list of cancelled, prohibited and whom accounts are frozen by the Home ministry regarding FCRA.

Identification crisis for Christian NGOs : It is also observed that many Christian NGOs have mentioned their ‘nature’ of work as Hindu (Religious), or Muslim (Religious) NGOs. For example, Church of Christ Mission in India based in Bilaspur in Chhatisgarh has registered its nature of work as ‘Religious (Buddhist), Cultural, Educational, Social’.

Activities of NGOs : NewsBharati searched activities of ‘Good Samaritan evangelical and social welfare association (GSEVSWA)’ from Andhra Pradesh. This NGO claims that it is pioneer among social and spiritual organizations in the State of Andhra Pradesh. Its website says, “Founded way back in 1979 by Pastor Rev. Peter Subbaiah, the organization aims to provide homes and education for orphan children and widows, as well as for families living in poverty.”

NewsBharati found that its accounts were frozen by the Union Home Ministry and importantly it is also prohibited from receiving foreign contributions and had been booked by the Economic Offences Wing of the Delhi Police under the Foreign Contribution Regulation Act.

Shocking facts : Most shocking fact found was involvement of the spiritual GSEVSWA and its founder Pastor Subbaiah in buying babies from a tribal group called the Lambada and selling them to foreigners. Peter Subbaiah was arrested and placed in prison in 1999. Two women ‘social workers’ representing GSEVSWA were charged with buying Lambada infants for relatively small sums ($15 to $45), and then receiving significantly larger sums ($220 to $440) from the orphanages for the children. Reportedly orphanages received $2000 to $3000 for each child placed in intercountry adoption. Gruesome activities of this Christian Religious NGO are also available as International adoption scandals’ on Wikipedia. Notably, arrested Pastor is a Congress person and works as secretary of the Chittoor District Congress (I) Committee.

According to the FIR, during the course of inspection of books of accounts and records of the association of the Delhi-based organisation, the FCRA wing of the Home Ministry found that it had violated various provisions of the Act by receiving foreign contributions amounting to Rs. 41,74,097 without permission from the Central Government during 1994-95 and 2005-06.

In another case, Andhra Pradesh State government had announced a reward of Rs. 5 lakhs for anyone providing information on Savithri Samson, co-founder of the John Abraham Memorial Bethany Home, whose account is frozen. Samson was absconding selling babies and in violation of adoption guidelines in 2001.