What is India: A Federal State?﻿ 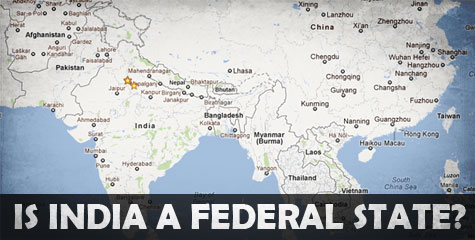 Is India a federal state? According to one view, in spite of the fact that the Indian Constitution established a ‘federal’ state, it is indeed difficult to put the Indian State in the category of a true “federation”. Let us go back into history. In pre-independence India there were actually two ‘Indias’. One was ‘British India’ and another was ‘Native India’, the latter ruled by Rajahas, Maharajahs, Nawabs and even a Nizam. Of the latter, there were about 600 ‘princely’ states, large and small, while the British had eleven ‘provinces’ and four Chief Commissioner’s provinces under their control.

Shortly after independence the princely states were integrated within the Indian Union and became part of a full-fledged India; a couple of states may have dithered like Hyderabad and Jammu & Kashmir, but soon they took came to be absorbed in the larger India, though the exact nature of Jammu & Kashmir’s status remains to be defined. So there was no question of any ‘native’ state remaining free or dictating terms to become part of a “federation”. The very concept of ‘federation’, in the circumstances, is misleading. States like Hyderabad, Mysore, Travancore-Cochin totally lost their identity by becoming part of a larger India. That the provinces to which they were attached subsequently were re-organised along linguistic lines is another story. The authority to do so lay with the Centre.

Under the Constitution which came into existence on January 26, 1950, it is the Centre which is supreme and beyond challenge. But, as Justices Reddy and Agarwal once noted, “the fact that under the scheme of our Constitution, greater power is conferred upon the Centre vis-à-vis the state, does not mean that the states are mere appendages of the Centre, but “within the spheres allotted to them, states are supreme”. In recent times, some of the states like West Bengal, Orissa and six others have questioned the right of the Centre to pass certain legislation dealing with terrorism without their being consulted. This is in regard to the proposed National Counter-Terrorism Centre. Law and Order is a state subject and it was incumbent on Home Minister Chidambaram to take on board the offended Chief Ministers of eight states (West Bengal, Gujarat, Bihar, Orissa, Tamil Nadu, Madhya Pradesh, Himachal Pradesh and Punjab) before drawing up the anti-Terror legislation.

The first mistake that Chidambaram made was to club all existing domestic and foreign intelligence agencies under one omnibus structure under the Home Ministry. That was sheer arrogance. As the media pointed out, “the bone of contention in the proposed NCTC was the free hand the Centre sought to grant it to undertake search and arrest procedures throughout the country without first getting the nod of the state governments. ….. Given the rampant misuse of such powers by an increasingly authoritarian Centre to harass Opposition-run governments, the refusal of the CMs to surrender their powers is not without merit. For, in the name of fighting terror there are fears that the Centre may well use the special powers of search and arrest to harass persons politically inconvenient to it. The Congress’ record in this regard is most untrustworthy”. In his book The Constitution of India: A Political and Legal Study, J.C. Johari states the situation clearly. To quote him: First, we have a federal system in which the positions of the units is not as strong as that of the States of the United States or of the cantons of Switzerland. Second, parliamentary form of government has been set up both at the Centre and in the states as a result of which, the structure of the State Governments is similar to that of the Centre. As the President is the titular head of the Indian State and the real authority is vested in the Council of Ministers, headed by the Prime Minister, collectively responsible to the Lok Sabha, so, at the state level, the Governor is the constitutional head and the real authority is vested in the Council of Ministers, with the Chief Minister at the head. The state of Jammu & Kashmir is an exception. India may be called a federal state, but it must be remembered that the component states are not ‘free’ states that agreed to enter into a federation, but are geographical areas the sizes of which can be increased or decreased by the Centre.

The Centre, as Johari clearly states “alone is empowered to redraw the political map of the country”. Parliament may, by law, admit into the Union, or establish new states on such terms as it thinks fit. As Article 3 states clearly: “The Parliament may, by law (a) form a new state by separation of territory  from any state or by uniting two or more states or parts of states or by uniting any territory to a part of any state. Parliament too, can alter the name of any state. Thus, Parliament made laws whereby the former state of Mysore came to be called Karnataka and the remains of a divided state of Madras came to be known as Tamil Nadu, an when the then Bombay Province was broken up, we had states like Gujarat and Maharashtra, with some parts of the old Province being allotted to Karnataka.” A state can make suggestions, officially through the concerned legislature, but they won’t be binding on the Centre. Uttar Pradesh Chief Minister Mayavati may suggest the further break up of her state and get her legislature to move a resolution to that end, but there her power stops. But is there a possibility of another States Reorganisation Commission being appointed to redraw the map of the country to suit current demands?

Time was when the concept of a linguistic state was the fashion of the hour. No more. Increasingly one hears demands for the creation of a Telangana and a Vidharbha from the existing states of Andhra Pradesh and Maharashtra. And if a Vidharbha can be created why shouldn’t Maharashtra be further divided to make way for a Konkan State? In the run up to the reorganisation of Indian States in 1956, Prime Minister Jawaharlal Nehru is quoted as saying that “small states will have small minds”. That is putting it mildly. Considering the number of criminals who get elected both to Parliament and states, one can’t get over the feeling that in smaller states it is a cabal of criminals who may come to power and wreak havoc to the law and order situation throughout the land.

Corruption may turn out to be the order of the day and terrorism may become official policy. There are some like senior journalist BG Verghese who has been quoted as saying that “there is nothing wrong in envisaging India at 2040-50 with a population of around 1,600 million organised in 60 states with an average population of 25 million each and some 1,500 districts”. The historian Ramachandra Guha is also quoted as saying that a new State Reorganisation Commission would look dispassionately for Vidharbha, Gorkhaland, Harit Pradesh, Kongu Nadu (Western Tamil Nadu), besides which the emphasis should also be on granting real financial and political autonomy to panchayatas and municipalities. It may sound great to acknowledge not linguistic but “cultural” states, but in the end they may prove disastrous.

As it is, the MNS in Mumbai has been opposed to ‘outsiders’ – especially labour from Bihar – from making Mumbai their home. Creating states like Gorkhaland will further strengthen fissiparous tendencies and encourage chauvinism of the worst kind, thus killing the essential unity of the country. Under no circumstances should India be further divided along ‘cultural’ grounds. Creation of linguistic states was bad enough; the division of say, even a state like Karnataka, along Lingayat, Gowd and other categories would be totally damaging. At stake would be ‘The Idea of India, that is Bharat’. Would the creation of a ‘Unitary’ state, with the nation divided into districts and the districts run by District Boards, help in preserving the unity of the country? Do we need to experiment all the time? The ultimate aim must be for the preservation of the essential unity of the country and any division that perpetuates linguistic, cultural and ethnic groups must be fought tooth and nail. And that said, all is said.﻿