The Demon Son of God 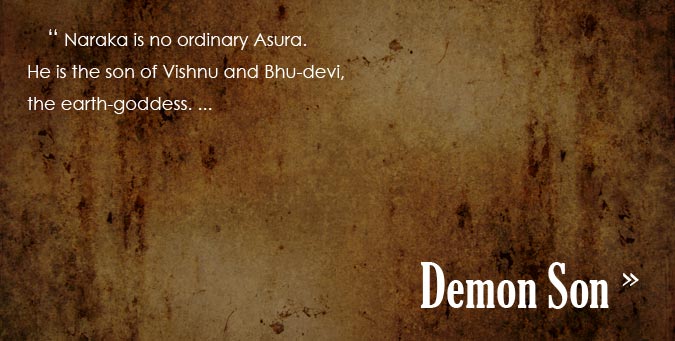 The post-monsoon festival season witnesses the death of many demons: Durga kills Mahishasura and Ram kills Ravan during Navaratri and Dassera, while Krishna kills Narakasura during Diwali. This latter festival is popular mostly along the west coast of India and in the Deccan regions of Andhra and Karnataka. In fact, in Goa, effigies of Naraka are burned on Naraka Chaturdashi, the eve of the new moon night, much like how effigies of Ravan are burned in the Gangetic plains.

Naraka is no ordinary Asura. He is the son of Vishnu
and Bhu-devi, the earth-goddess.
He was conceived when Vishnu took the form of Varaha, the boar, to rescue the goddess from the clutches of Hiranyaksha, the demon who had dragged her under the sea. As the two rose, they made love. So passionate was his embrace, that the earth until then flat was crumpled, giving rise to mountains and valleys. Varaha buried his resplendent tusks in the earth and she gave birth to all vegetation. It is from this union that Naraka was born.

This story reconfirms the assocation of Asuras with the nether regions and with vegetation and fertility. The guru of the Asuras, Shukra, associated with the planet Venus, possess Sanjivani Vidya which he uses to resurrect dead Asuras. And so every demon who is ‘killed’ during harvest time comes back next year as the next crop. Demons never die and so humans always have food on the table. By calling the vegetation that was harvested and threshed and stored as ‘demons’, early man perhaps sought to allay his guilt. Naraka at one level is the son (crop) of God and Goddess, Vishnu and Bhu-devi and at another level a demon (harvest).

Naraka’s story is an important one in Krishna Leela as through him Krishna, otherwise mortal and associated with earthly affairs, suddenly becomes a cosmic hero, called upon by the sky-gods, the Devas, to save them from this demon who can be killed by no god. So Krishna rides up to heaven on his eagle, Garuda. The battle with the Asura who has risen to the sky, instead of staying under the earth, is an intense one. For Naraka has a boon – he cannot be killed unless he strikes his own mother.

This story orignially from the Harivamsa is rather popular in Andhra Pradesh where preference is given to stories of Krishna in Dwaraka as a man married to Satyabhama and Rukmini, over the romantic stories of Krishna and Radha in Vrindavan. Satyabhama accompanies her husband on Garuda as she is eager to see her husband ‘in action’. She watches her husband fight Naraka and at one point Naraka’s weapon hits her. Infuriated, she turns the weapon back on him and Naraka dies instantly.

Thus inadvertently, Satyabhama becomes a Durga-like figure. We are reminded that she is a form of Lakshmi, hence of Bhu-devi, hence mother to Naraka. These stories of mother-son conflicts are a gentle reminder to humanity not to claim ownership over the earth who nourishes us. The earth may be a doting mother but she will not be a demure domesticated wife.

In memory of this day, in South India, people crush a bitter fruit as Naraka was finally crushed and then bathe after annointing themselves with oil made red with vermillion. The oil soothes the tired muscles, the red a reminder of the bloodbath. Wives sometimes bathe their husbands, and perhaps secretly chuckle, for while Krishna did fight, it was Satyabhama who did the final killing.