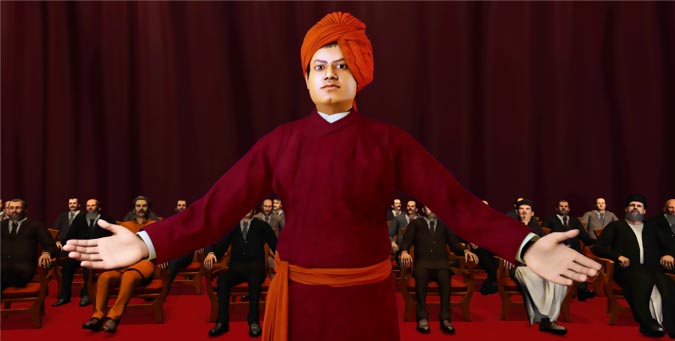 As part of 150th Birth Anniversary Celebrations of Swami Vivekananda, Ramakrishna Math, Chennai, India and Ramakrishna Mission, New Delhi has recently released a new 3D Movie “9/11 – The Awakening”. This short 3D Movie is about Swami Vivekananda’s historic speech “Sisters and Brothers of America” delivered at Parliament of Religions in Chicago on September 11th 1893. The movie portrays Swami Vivekananda’s trip to the west, his visit to 1893 World’s Columbian Expo, his Chicago address at Parliament of Religions (Art Institute) in 1893 and the popularly known story of Sea frog and Well Frog.

The entire Chicago Expo has been re-created based on 1893 Chicago Archive Maps and a virtual setup of the Parliament of Religions stage with an audience of 7000 members has been built. The ship that Vivekananda undertook during his journey to the West has also been re-created. The famous story of sea frog and well frog as told by Vivekananda has been depicted with colorful animation along with foley sounds effects to entertain the kids.

A realistic 3D Model of Swami Vivekananda with real skin shaders has been created and improvised based only on his photographs in the absence of any video reference of Vivekananda. Only a few Hollywood animation movies like Polar Express (2004), Beowoulf (2007) have attempted realistic models for living personalities but for Vivekananda it makes it all the more challenging since 3D body scan cannot be performed (as he is not alive). To create smoother animation for the 3D movie, Motion capture has been performed with an actor playing Vivekananda’s role.

The movie is currently screened at the 3D Theatre in Vivekananda House, Chennai and Ramakrishna Mission, Delhi.

For more info on the 3D Movie, please visit www.vivekananda3d.org