Arvind Kejriwal and Manish Sisodia, has received 400,000 Dollars from the Ford Foundation in the last three years - Arundhati Roy 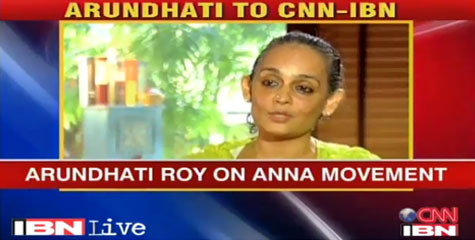 In an exclusive interview with CNN IBN activist Arundhati Roy reveals that even though Anna Hazare was propped up as the saint of the masses, he was not the driver of the movement. The anti-corruption movement, she says, is actually an agenda of multi-national corporations to increase the penetration of international capital in India.

Roy, who had earlier termed Anna’s movement as a ‘Gandhian coup’, expressed deep concern over Anna’s team members running NGOs funded by multinational corporations, not all of which are clean on the corruption front. She had written in a Hindu column on 21 August 2011...

“Kabir, run by Arvind Kejriwal and Manish Sisodia,
key figures in Team Anna, has received $400,000 from
the Ford Foundation (Link for $197,000) in the last three years.”
Kejriwal, an RTI activist, told Firstpost via sms that he had no comment, but asked ‘where is the proof’?

While voicing her anguish over why NGOs funded by World Bank and Ford are partcipating in mediating public policy, she said

“Three of core members ( Arvind Kejriwal, Kiran Bedi and
Manish Sisodia) are Magsaysay award winners which are endowed
by the Ford Foundation and Rockefeller.”
She added that World Bank alone runs 600 anti-corruption programmes in Sub-Saharan countries as a means to increase the penetrations of foreign capital.

She said there are serious concerns over the Jan Lokpal Bill because it does not talk about corporate corruption or how NGOs and corporations are taking over the traditional role of the government.

Roy said the main reason why she is so skeptical of Anna’s movement was because it was a ‘copy book of the World Bank agenda’.

Watch video: Roy said there are serious concerns about the Jan Lokpal Bill, corporate funders, NGOs and even the role of media.