Questioning Anna on RSS is unpatriotic 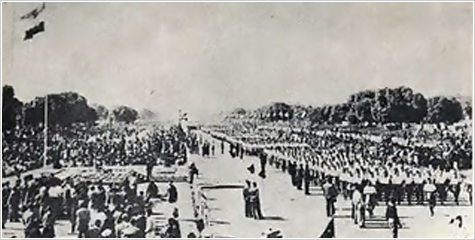 Nehru honoured RSS for its support and Shastri requested for it.

Congress is questioning Anna on RSS as if that’s a sin against the nation.

It seems we are not living in a vibrant democracy but either in a Stalinist regime or in a Saudi despot’s fiefdom. RSS–BJP support to Anna is being projected as the ultimate sin any Indian can commit against the national interest. And misrepresenting RSS Gen. Secy.’s letter to Swayamsewaks-cadres, to work for anti corruption drive and help get back black money stashed in Swiss banks, Anna is sought to be put in a question box-why did you take RSS support? The same secular-Taliban crowd had objected Anna putting up Bharat Mata portraits at Jantar Mantar though they had no shame collaborating with Congress ministers behind the scenes.

Neither does Anna need to have RSS support to survive nor does RSS need to piggyback him for staying afloat in public life. Both are serving the nation in their own way.

But the Congress perhaps has the shortest memory ever diagnosed in a public organization. Just a few decades earlier, their patron guardian belonging to the Gandhi-Nehru family, had honoured the RSS cadre by inviting them to participate in the Republic Day parade in New Delhi in full RSS uniform. That was the time when India passed through a 1962 aggression by China and the Nehru government had to arrest more than 250 senior communist leaders on charges of sedition. And the same Nehru government invited RSS cadre to participate in their own uniform in the ’63 Republic Parade as a gesture to honour them for their splendid role in helping the nation and boosting the morale of the soldiers.

Here is an old picture of that occasion- RSS swayamsewaks proudly marching past the Tricolour on Rajpath in their Ganavesh-as the uniform is known in Sangh parlance.

During the 1965 war, the then Congress Prime Minister Lal Bahadur Shastri had invited and lauded RSS help in helping maintain public order in Delhi, taking up traffic police assignments and thus relieving policemen to go on war time duties.

Isn’t it too ironical that under the utterly pronounced family rule, the same Congress is trying to question Anna’s wisdom by deliberately asking a wrong question- why did you take RSS support?

Even if, hypothetically assuming, Anna had asked for RSS support to end corruption, would that be construed as a sin and something that Anna shouldn’t have done?

Is RSS a Pakistan affiliate?

Does it reject the constitution like the Maoists and their anti-national intellectual supporters?

Is RSS against democracy? Or is it a banned Indian terrorist outfit like SIMI or Lashkar or Hizbul or Naxals? Does it work against India and had it designed country’s division in 1947?

The ones who really did it became partners of the government led by Congress.

In 1962-63, Congress under Nehru had put hundreds of Communist leaders behind bars for sedition. Some one needs to use RTI to find out more details on such a historically revealing issue. The same communists became UPA-1’s coalition partners.

In 1947, Indian Union Muslim League, the only party using the word ‘union’, worked to divide the nation.

It became a party discarded by all post Independence obviously for this reason. It was this UPA government led by the Congress that invited Muslim League for the first time in our history to join the council of ministers.

Congress is happy to go soft on Naxals and appoint a convicted pro-Naxal-Maoist person as a key position holder in the Planning Commission. It can also conveniently forget the unanimous and all party resolution on Kashmir passed in 1994 and appoint a group of interlocutors to give divisive suggestions.

But still it has the cheek to question Anna on RSS support.

Simply because patriotism is a hateful word in Congress lexicon.

Anyone who works against the Indian unity and integrity becomes a natural buddy of the party. Like Arundhati Roy, Batla House gang, Azamgarh Jihadis and Maoist mafia. Have you ever seen a Congress leader sympathizing with Inspector Mohan Lal Sharma, killed in Batla House operation? But they obviously go to the houses of suspected terrorists.

Hence RSS must be an obvious target of the Congress crowd.

A cartel of secular shamanists, love to stand with murderer Jihadis, anti-democracy and constitution burner Naxals, but through a control over media and money, they try to portray a different ideological stream members as sinners and pariahs.