When Caste Was Not A Bad Word 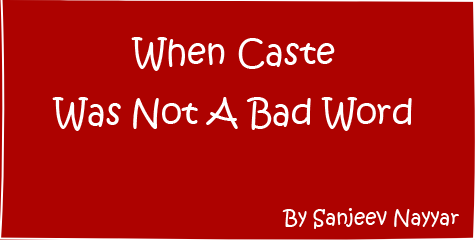 Were caste equations always as bad as they are today? Not quite. There were always castes but they were not backward.

Now that the Supreme Court has referred the matter of 27% reservations to a Constitutional Bench it might be worthwhile revisiting certain historical truths. Proponents of the 27% reservation for OBCs argue that reservations would help them overcome centuries of discrimination! However, if such animosity really existed between the forwards and backwards, how could the Indian Civilization have thrived for over 5,000 years?

A noted Gandhian, Dharampal visited British & Indian archives and reproduced reports of Surveys undertaken by the British in Bengal, Punjab and Madras Presidency (1800-1830). According to Collectors reports reviewed by Governor Sir Thomas Munro on 10/3/1826, of the 30,211 male school students in Madras Presidency 20% were Brahmins and Chettris, 9% were  Vaishyas,50% were Sudras, 6% were Muslims and others were 15%. Madras Presidency then consisted of areas that fall in modern day Tamil Nadu, A.P, Orissa, Kerala and Karnataka. Another report by J Dent, Secretary, Fort Geroge dated 21/2/1825 stated that out of 1,88,680 scholars in all collectorates of Madras Presidency Brahmins were 23% while Sudras constituted 45%.

Startling as it may sound, these percentages establish that Sudras not Brahmins comprised the majority of students and scholars.  How & Why do the Backward Classes find themselves in the situation they are today?

Before British rule, traditionally, educational institutions were funded by revenue contributions made by the community and State. About one third of the total revenue (from agriculture & sea ports) was assigned for the requirements of social & cultural infrastructure (including education). This system stayed mainly intact through all previous political turmoils. The British, however, increased the quantum of land revenue and adversely changed the terms of payment for the community. They centralized collection of revenue, leaving hardly any revenue to pay for social and cultural infrastructure.

Further, the means of the manufacturing classes (small scale enterprises or SME in today’s parlance) were greatly diminished by the introduction of European goods. Craftsmen especially those engaged in the making of cloth, manufacture and mining of metals, construction work were through fiscal and other devices reduced to a state of homelessness.

Sapped for funds, educational institutions and manufacturing classes became history, leading to grave consequences. One, it obliterated literacy and knowledge amongst the Indian people. Two, it destroyed the Indian social balance in which, traditionally, persons from all sections of society appear to have received a significant degree of schooling. Three, this destruction along with economic plunder led to great deterioration in the status, socio-economic conditions and personal dignity of those, now known as scheduled castes; and to a lesser degree, that of the vast peasant majority encompassed by the term ‘backward castes’.

From about the end of the 19th century, various factors began to attempt a reversal of the results of British policy. This led to what are now known as backward caste movements. The manner, in which their objectives are presented however, seems to suggest that the ‘backward’ status they are struggling against is some ancient phenomenon. In reality, however, their cultural and economic backwardness (as distinct from their ritualistic status on specific occasions) is post 1800, and what basically all such movements are attempting to achieve is the restoration of the position, status, and rights of these peoples prior to 1800.

Dharampal wrote in ‘Rediscovering India’, “For the British, as perhaps for some others before them, caste has been a great obstacle, in fact, an unmitigated evil not because the British believed in casteless ness or subscribed to non-hierarchical system but because it stood in the way of their breaking Indian society, hindered the process of atomization, and made the task of conquest and governance more difficult”.
The interest in caste peaked around 1891 when the census came out with what were termed as Index of Castes. The word ‘caste’ is of Spanish origin and fails to capture the meaning of the Indian term, “jati,” which more properly translated as “community.”  Jati in traditional India promoted and preserved diversity and multiculturalism by allotting every jati a particular space and role in society so that no jati would be appropriated or dominated by another. America, which has long glorified the ideal of a “melting pot” of one assimilated culture, is now coming to see the value of the “salad bowl” model, in which different cultures co-exist in harmony. The epitome of this model was the Indian jati system, revealing that our ancient practices are relevant to the modern world. Moreover, the jati system was integral to the survival of the Indian nation: in Swami Vivekananda’s words: “Caste is an imperfect institution no doubt. But if it had not been for caste, you would have had no Sanskrit books to study. This caste made walls, around which all sorts of invasions rolled and surged but found it impossible to breakthrough.”

So, the widespread notion that discrimination in opportunity for education existed for millennia is a dangerous misconception that clouds our policies and threatens the real progress of the backwards castes.

The logical next steps are that, one, caste based reservations must come with a sunset clause as was envisaged in the Indian Constitution. Two, since economic deprivation has led to backwardness, economic backwardness should be the basis of reservation. The apex court has said that the creamy layer in OBCs must be denied reservations.

The reservations policy and caste-based politics of the last sixty years have managed to make people more aware of and narrowly identified by their caste, rather than focusing on true social and economic integration. Instead of increasing supply of education facilities, successive Governments have over regulated the sector, stifling its growth. Under the guise of protecting SME’s, government policy has made them less efficient and does not allow economies of scale.
The words Caste and Class have become conflated together, when in reality they refer to different phenomena. Also, the nomenclature used to describe the backward classes keeps changing. In the 1890s they were called The Depressed Classes. In the early 1930’s, Gandhi named them Harijans. The Government of India Act 1935 introduced the words Scheduled Castes for the first time. Since the 1990s, the word Dalit has come into prominence.

Jats are a backward community in Rajasthan but a very powerful community in neighboring Punjab. Is there a comprehensive national definition of who constitutes an OBC?

There are multiple solutions to the Reservation problem that need to be pursued simultaneously. One, Government should focus on primary education only. Two, it must lay down a transparent regulatory framework for higher education. This would increase investment in education across various sectors. Three; it must lay emphasis on vocational training that would make a graduate employable. It should support institutions that provide short term courses in retail, financial planning, analytics and pharma. Once supply is enhanced and identity based reservation eclipsed, India will have an egalitarian educational system where the only affirmative action will be financial assistance to economically weaker students.

Four, help students strike a work / life balance. Five, allow student to expand their knowledge beyond mere academics and to strengthen and explore their inner nature. Education should also encompass Indian wisdom and thought. Six, success is enhanced by the power of concentration so students must learn how to concentrate. Lastly, students should be made to realize that a degree is a passport to a job! Therefore, personality and character count. All actions originate from thoughts. Pure thoughts result in constructive deeds. The above ideas could help students be at peace within rather than be caught in the chakravuya of reservations.

With so much emphasis on education I remember Mark Twain’s words, “I do not allow my schooling to interfere with my education.”