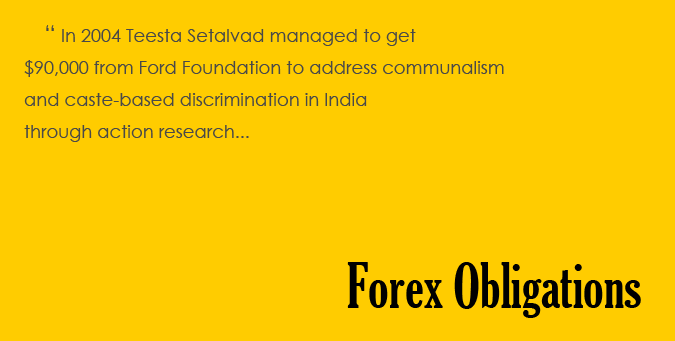 Mumbai, Teesta Setalvad is already infamous and in suspicion for being dishonest with the Muslim witnesses in Gujarat riots cases and using her aides for illegal route to win legal battle. For several years, Setalvad is relentlessly trying every method to defame Gujarat CM Narendra Modi by submitting false testimony to the Judiciary about Gujarat riots. But now the ‘hunter’ is in position to be hunted. Teesta has been caught in another cloud of suspicion. New facts have emerged about the misdeeds in ‘Trusts’ in which activist Teesta Setalvad and her husband Javed Anand are main Trustees.

It is revealed that Citizens for Justice & Peace (CJP), a Mumbai based NGO, has received whooping Rs 1.56 Crore foreign fund in its FCRA Account No-014104000204736 with IDBI Bank, Khar Branch, Mumbai from January 2009 till June 2012 and another Rs 1.15 Crores in Sabrang Trust in 2009 in which i.e. Rs 2.71 Crores in just 3 years. Both Trusts are under suspicion because of the activities of their Trustees.
Donations for ‘causes’ turned to fixed deposits & personal account : In the recent years, out of Rs 1.56 Crores received by CJP towards foreign donation, an amount of Rs 25.50 Lacks was transferred in the Fixed Deposit Account on various dates, Rs 27.75 Lacks transferred to another account of CJP, over Rs 4 Lacks transferred in the name of Teesta Setalvad and Rs 1.60 Lacks to Sabrang Communications & Publishing Pvt Ltd which is a company owned by Setalvad engaged in publishing her Communalism Combat magazine, Rs 2.04 Lacks transferred in Account No-014104000105705.
In the permission granted under FCRA to CJP by the Govt of India, the Ministry of Home Affairs, on 21/11/07 it was clearly mentioned that “The bank account mentioned in your application should be used for receiving foreign contribution and no other amount should be credited to this account”. However a local donation of Rs 10 Lakhs was deposited by CJP in this FCRA account received from The Chatwal Groups by cheque no.376284 dated 26/02/09 and Rs 2 Lacks were also deposited received from Saurya Foundation, which was a clear violation of condition mentioned in the FCRA registration.
Teesta and her husband violate another FCRA rule : Another condition of the FCRA permission was that “The association cannot bring out any publication (Registered under PRB Act 1867) or act as Correspondent, Columnist, Editor, Printer or Publisher of a registered news paper” It is an open fact that Teesta Setalvad and Javed Anand are Editors of Communalism Combat (CC) magazine which is registered with the Registrar of Newspapers, also called the Press Registrar, who maintains a Register of Newspapers and Periodicals published in India. Setalwad’s other company Sabrang Communications & Publishing Pvt Ltd is the printer & publisher of this magazine.
Teesta and Javed Anand being Editors, Columnist and Printer & Publisher of a magazine have also violated this condition of FCRA permission which attracts provision of section 4(1) (b) of FCRA Act which is punishable under Section 6(1) and/or Under Section 23 (1) of the FCRA, 1976.
Fund received for one cause used for another : Most surprisingly, Javed Anand, one of the trustees of CJP and husband of Teesta Setalvad has claimed that the grant received by CJP from UNVFVT, for victims of torture “was spent towards legal aid to the survivors of the communal carnage in Gujarat 2002”. On scrutiny of FCRA account of CJP, another fact has emerged that, although CJP has received $71,000 (Rs.32.56 Lacks) from UNVFVT towards providing legal aid to the survivors of the communal violence in Gujarat but only a meager amount of Rs 46,530 was paid on legal work from this account.
Crores of donations to Teesta: To keep Gujarat burning? : It is not understandable that how the so-called social activist has managed to receive thousands of crores as foreign remittance in her two institutions namely CJP & Sabrang Trust in just few years. Is it only to keep Gujarat burning in flames of hatred between the two communities and to demonize Chief Minister Narendra Modi? As the facts are being revealed and Court Orders are coming out, unfortunately the visible answer shows affirmative answer to the above said claim.
Teesta Setalvad is racking the issue of 2002 Gujarat riots in the national and international forums and seeking donations in the name of helping riots victims from the last several years.
It is reported that, the major amounts received by CJP in its FCRA account are $19,000 (Rs 8,67,330.00) on 30/01/09 from the Ian Anderson Group of company Ltd , €10,000 ( Rs 6,95,500) on 23/11/09 from HIVOS, Netherland , $15,000 (Rs.6,97,768.00) on 15/06/10 from United Nations Voluntary Fund for Victims of Torture (UNVFVT), $20,000 (Rs.9,33,465.00) on 02/09/2010  from (UNVFVT) , $36,000 (Rs.16,24,497.00) on 28/02/11 from (UNVFVT) . An amount of Rs 12, 38,208.76 (Appx $25,000) was also credited in the above account of CJP on 15/06/12 in which name of donor is not disclosed. Ian Anderson Group of company of USA which is purely a music company has paid $19,000 to CJP.
A report about financial transactions of Teesta Setalvad and her ‘Trusts’ has been prepared by Parixita Rathod, Dy. Commissioner of Police (Zone-V) of Ahmedabad city. Report confirms that all above said information about CJP is sent by Ms. Teesta Setalvad through letter and e mails.
Ford Foundation pampering Teesta’s ‘Sabrang’ : Teesta Setalvad and her husband Javed Anand are running "Sabrang Trust" also based at Mumbai in which they have received $ 2,50,000 ( Appr Rs 1,15 crores)  from Ford Foundation, USA in 2009 for "Peace building activities in Gujarat & Maharashtra". Before that, in 2004 Teesta Setalvad managed to get $90,000 from Ford Foundation to address communalism and caste-based discrimination in India through action research, web-based information dissemination, development of civil society networks and media strategies. Similarly in 2006 Sabrang Communications received $200,000, to address communalism and caste-based discrimination in India through active research, web-based information dissemination, development of civil society networks and media strategies.


# Save Me from Teesta and Mahesh Bhatt : Qutubbuddin Ansari
# Best Bakery Case witness says Teesta Setalvad forced me to lie
# Teesta's own aid submits proof of fake affidavits to Nanavati Commission
Teesta Setalvad twisted the truth and misguided the Judiciary and the Nation for years, only to execute a single point agenda to vilify Gujarat CM Narendra Modi. Now it’s her turn to confess before the Nation.