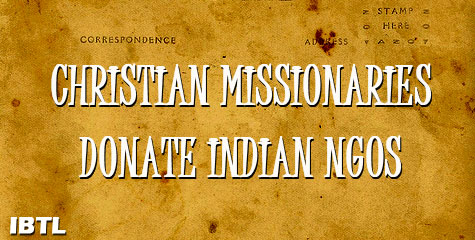 What has been asserted time and again by nationalist organisations and has been emphatically refuted by self-proclaimed liberals, is now out in the open. The latest report of the Home Ministry shows that more than Rs 10,000 crore was pumped into India during 2009-2010, mostly from the USA and Europe's Christian organisations to NGOs in India.

The report, approved by Union Home Secretary RK Singh in January 2012, revealed that major donors from abroad and receivers in India are Christian Missionaries and Church-sponsored NGOs. The four largest donors are all evangelical christian organisations who have a prophessed goal to convert people to Christianity. The list of foreign donors is topped by the Gospel For Asia Inc of the USA (Rs232.71 crore) followed by Fundacion Vicente Ferrer, Barcelona, Spain (Rs228.60 crore), the World Vision Global Centre of the USA (Rs197.62 crore) followed by Compassion International of US, (Rs131.57 core).

The highest amount of foreign contribution was received by the World Vision of India, Chennai, Tamil Nadu (Rs 208.94 crore), followed by the Rural Development Trust, Ananthapur, AP (Rs 151.31 crore), and Shri Sevasubramania Nadar Educational Charitable Trust, Chennai (Rs. 94.28 crore). The NGO's show these rupees to be spent on philanthropic causes. The report says that the highest amount of foreign contribution was received and utilised for establishment expenses, rural development, welfare of children etc. However, the report categorically mentions that the NGO sector in India is vulnerable to the risks of money laundering and terrorist financing and necessary steps for rigorous enforcement as well as coordination with foreign countries for law enforcement will continue.