Godhra and beyond: A man called Narendra Modi 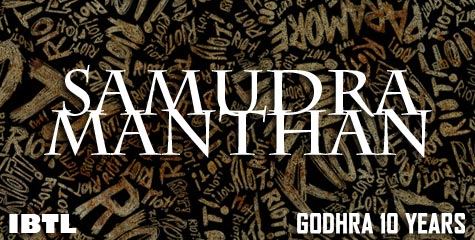 February 27th, 2002 - That was the fateful morning when a mob of a thousand Muslims burnt an entire coupe of Sabarmati Express carrying Ramsewaks returning from Ayodhya Ram Janmbhoomi, to death! At this heinous crime, the secularists of India, infamous for their hypocrisy and ignoble in words and deeds, in so many words suggested first that it was an 'accident', then cooked up ridiculous theories of 'fight with a tea-hawker' leading to a thousand people assembling with Petrol cans and torching the train, and even implied, that since they were Ramsewaks, they had provoked muslims to burn them to death! This nefarious design of those people, their sheer apathy exhausted even the infinite Hindu patience, and there was reaction - one that had the capacity of blow Gujarat off, but the government controlled it.

790 Muslims and 254 Hindus were killed in the riots. Over a 200 went missing. While the CM of Gujarat had recorded an appeal to maintain peace and that was telecast on Doordarshan continuously [YouTube Video], even VHP leader Acharya Giriraj Kishore had requested to maintain peace. Yes, there were enraged groups - and they were understandably so. Hindu organisations often call themselves 'parivar', a family. The people have close personal contact. If 59 members of one's family are burnt to death, and there is a propaganda implying how they 'deserved' that death because they were returning from Ayodhya, one is bound to lose control of one's actions. This is no justification of what came around, but an explanation based on simply human psychology and human weaknesses. But those group of people was also joined in by goons from the opposition party, who wanted to exacerbate the situation to bring the Modi government down, to once again prove how 'deadly' the 'communal' BJP can be for the minorities. This stands on record that Gulberg society riots had Meghsingh Chaudhary, a Congress leader involved who was arrested and presented to Supreme Court for his active role in that case, one that torched Ehsan Jafri and 34 others packed in the former's house, to death.

It is true that Gujarat riots is one in which so many people have been convicted. Partial justice has already been done, unlike in previous riots where culprits would go scot-free. It is also true that Gujarat government had created a commission including the Leader of Opposition in the State Assembly to look after the rehabilitation of nearly 1 lakh Muslims and 40000 Hindus who were displaced because of riots. Even this is true that Gujarat which had a long history of communal riots, where even children's dispute would lead to killings, has not seen any riots or even scuffle for almost 10 years now. The 'sauno-saath, sauno vikaas' Sadbhavana Mantra of Narendra Modi has accomplished it. How Modi is impartial when it comes to administration is also proved by how he didn't hesitate to order the partial demolition of nearly 80 temples [Modi on temple demolition drive, VHP fumes] of Gandhinagar which were illegally encroaching roads.

On one hand stands the grief and misery of those who lost their close ones in Godhara and post-Godhara riots. The pain of the victims was compounded by a relentless, selfish and often malafide media in their paranoia to blame Modi for all that happened, and for that invented despicable lies. It was compounded by of the league of Teesta Seetalwad who dug out buried dead bodies from their caves with no regard to the departed soul, only to drive her agenda. [Teesta's own aid submits proof of fake affidavits to Nanavati Commission]. And it was compounded by the league of those politicians who like Sonia Gandhi called Modi a mass-murderer and merchant of death, without recalling how a late Rajiv Gandhi had virtually justified the anti-sikh riots orchestrated and organised by Congress leaders and workers post Indira assassination, because the assassins were Sikhs, even forgetting how these so-called followers of Gandhi had murdered innumerable Marathi Brahmins because Nathuram Godse was a Marathi Brahmin!

But perhaps bigger than the combined grief of the riot victims' families, is the pain and ordeal that this one man, Narendra Modi has undergone. In Bhagwad Geeta, Lord Krishna reminds Arjun how infamy is worse than death for a noble person. For 10 years, Narendra Modi has endured all the infamy that the hate-mongers in media, the secular extremists and the liberal militants tried to bring upon him. This is not something ordinary. Lordess Sita did not tolerate when she was falsely accused. She first left Ayodhya, and then, the world. Lord Krishna did not tolerate when Shishupal went on abusing Him. After a 100 abuses, He ended his streak of life. Modi did not do either. He did not run away from the scene, nor did he turn revengeful to the hate-mongers who have been hell-bent on defaming him. Modi, on the contrary, had all the bane, and saved his world, his Gujaratis, his Gujarat from it. If a parallel is to be drawn, it has to be drawn with how Lord Shiva drank all the poison that was produced in Samudra-manthan and saved the world from destruction. "Main Nar-naarayan Neelkanth ban gaya na ismein kuch sanshay", to describe in the lines of Atal Bihari Vajpayee. Yes, Modi endured all the venom that the hate-mongering serpents produced against him, and led Gujarat to security, sadbhavana and prosperity.

It needs immense endurance, that of a Yogi to survive it all, and still deliver what Modi has delivered. ‘Gyaan-yog’ and ‘Karm-yog’ are the ways that Bhagwad Geeta describes to attain salvation. No wonder, Narendra Modi, who at a very young age, left his home with just a pair of clothes, in search of Truth and God, and lived two years in exile, has been a practitioner of both. It was he who brought forth the idea of Ram-rath Yatra of L K Advani and redefined the shape and momentum of the Ram janmbhoomi movement. It was he who escorted Murli Manohar Joshi is 1992 to the Lal Chowk of Srinagar, in those days of heightened militancy, and unfurled the national flag there, something, Sushma Swaraj and Arun Jaitley could not do despite their stature and relative normalcy in Kashmir. And, it is him, who has practiced, “Sukhe Dukhe Same kritwa” of Bhagwad Geeta, and performed his duties, in spite of the calumny campaign by powerful people.

# Why Godhra only ? Read the history of RIOTS since 1715-1969
# Face The Facts On Riots, The double standards of pseudo-secularists
It's no wonder that today, Modi stands taller than the tallest of Indian leaders. A young generation sees him as the future of this country. They love him. They fight for him on social networking sites. You abuse him, and they'll challenge you with facts. There is need to bring all those facts once again in public domain that media has purportedly hidden or twisted to malign Modi.