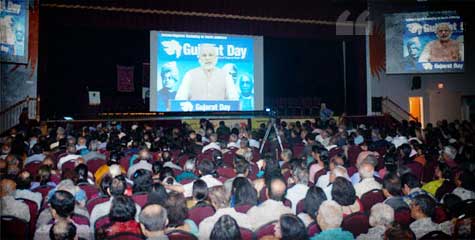 On the morning of Sunday 20th May 2012, Gujarat Chief Minister Narendra Modi addressed Non Resident Gujaratis (NRGs) and Non Resident Indians (NRIs) across 12 cities of USA through video conferencing. The Chief Minister spoke on the various development initiatives of Gujarat in the last decade.

Beginning his speech, Shri Modi said that even though it is 7 AM in Gujarat, there are many people watching this programme, which is indeed wonderful. He congratulated the diaspora for always remembering their Motherland and for taking this initiative to celebrate Gujarat’s foundation day.

Modi pointed out that not only Gujaratis but also people from all over India have gone overseas and praised the development in Gujarat. He stated that his Mantra is the development of Gujarat for the development of India and added that whatever Gujarat is today, the credit for it must go to 6 crore people of Gujarat who have dreamt and worked hard to realize these dreams.

Reminding people about Gujarat’s glorious history, Shri Modi asked who could forget Mahatma Gandhi and Sardar Patel? He affirmed that Gujarat had contributed in both strands of the freedom struggle. If Mahatma Gandhi and Sardar Patel led the non- violent struggle, Gujarat is also home to Shyamji Krishnavarma who inspired revolutionary nationalists. He also believed that Gujaratis are a global community who imbibe cultures from all over the world, mixing well wherever he or she goes. The fact that so many people worked hard to make this programme a success and even wrote letters with ideas for Gujarat shows how much love there still is for Gujarat, the Chief Minister pointed out, adding that he is determined not to let tis love go away just like that.

Modi spoke in depth about the decade of peace and development in Gujarat. He brought out that in 2001 Gujarat was facing a revenue deficit of Rs 6700 crore but in ten years it has become a surplus state, that too without imposing additional taxes on the people. All Gujarat did was to give existing tax structures more efficiency. In 2001, Gujarat had just faced an Earthquake and before that a drought and cyclone and everybody had written off Gujarat but due to the efforts of the people, Gujarat overcame each and every challenge to develop stronger.

While concluding his speech, Shri Modi said that Gujarat is a land of Shanti, Sadbhavana and Vikas. He expressed joy in the fact that people from all states are working in Gujarat and living very happily. He stated that it is our responsibility to make the dreams of our forefathers into a reality. He again thanked the organizers and ended his speech with ‘Jay Jay Garvi Gujarat!’