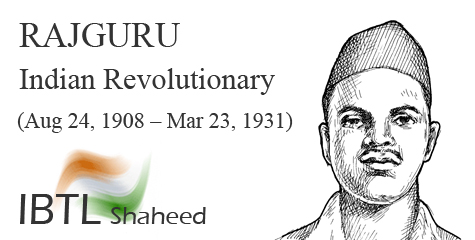 Shiv Ram Hari Rajguru was born in an average middle-class Hindu Brahmin family at Khed in Poona district in 1906. He came to Varanasi at a very early age where he learnt Sanskrit and read the Hindu religious scriptures. He had a good memory and learnt by heart the 'Laghu Siddhant Kaumudi'. He loved physical exercises and was associated with a number of such associations. He had great admiration for Shivaji and his guerilla tactics.

At Varanasi, he came in contact with revolutionaries. He joined the movement and became an active member of the Hindustan Socialist Republican Army (H.S.R.A). He was known in the party under the pseudonym of Raghunath. Rajguru had fearless spirit and indomitable courage. The only object of his adoration and worship was his motherland for whose liberation he considered no sacrifice too great. He was a close associate of Chandra Shekhar Azad, Sardar Bhagat Singh and Jatin Das and his field of activity was U.P and Punjab, with Kanpur, Agra and Lahore as his headquarters. Rajguru was a good shot and was regarded as the gunman of the party. He took part in various activities of the revolutionary movement, the most important being Saunder's murder. Lala Lajpat Rai, an eminent nationalist leader and popular amongst the revolutionaries, was fatally wounded in a police lathi- charge on 20 October 1928, while leading a procession against the Simon Commission, and died on 17 November 1928. The revolutionaries planned to avenge Lalaji's death by killing the Police Superintendent, Scott and the Deputy Superitendent of Police, Saunders who were responsible for the lathi charge leading to the death of Lalaji. Chandra Shekhar Azad, Shiv Ram Rajguru, Bhagat Singh and Jai Gopal were deputed for the work. On 17 December 1928, while Saunders came out of his office and started his motor- cycle, he was shot dead in front of the police headquarters at Lahore by Rajguru. Azad shot dead Channan Singh, a Head Constable, who wanted to chase the three revolutionaries. All of them escaped through the D.A.V. College compound: The same night posters of the HSRA declaring 'Saunders is dead. Lalaji is avenged' were put up throughout the city of Lahore. On 20 December, Rajguru left Lahore disguised as Bhagat Singh's servant, who travelled in a first class compartment with the wife and the young son of the revolutionary Bhagawati Charan. He left Bhagat Singh at Lucknow and went underground.

Later Bhagat Singh was arrested in the Assembly Bomb Case and several other revolutionaries were arrested with the help of approvers (Jai Gopal, Phanindra Nath and Hansraj Vohra). Rajguru was arrested at Poon on 30 September 1929 and a revolver with fourteen cartridges was recovered from a box where he was sleeping. The Government started a case against sixteen persons (including Rajguru), known as the Lahore Conspiracy Case. Judgement was delivered on 7 October 1930, Sardar Bhagat Singh, Sukhdev and Rajguru were sentenced to death and the other accused were awarded various terms of imprisonment. The whole nation was awakened and the names of Bhagat Singh, Rajguru and Sukhdev became as popular as that of Mahatma Gandhi. Meetings, processions and representations were made for commutation of their death sentence. Mahatma Gandhi and the leaders of the Indian National Congress attempted to save their lives, but they failed. An appeal to the Privy Council was alos rejected. Rajguru along with his two comrades was hanged in the Lahore jail in the evening of 23 March 1931 and their bodies were burnt under police supervision. At the time of his martyrdom, Rajguru was hardly twenty- three years of age.

The execution of the young revolutionaries was regarded as a national disaster and national mourning was observed throughout the country. The A.I.C.C session at Karachi (1931) met under gloom and passed a resolution placing on record its admiration of the bravery and sacrifice of the late Sardar Bhagat Singh and his comrades Sukhdev and Rajguru and mourning with the bereaved families the loss of these lives. The Congress is of opinion that the triple execution is an act of wanton vengeance and is a deliberate flounting of the unanmious demand of the nation for commutation.