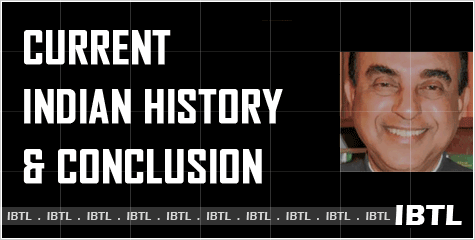 26. British imperialist inspired historians and their tutees, and the Communists in tandem, have propounded India as a multi-nation artificial construct and as an administrative by product of colonialism. This is the current version in our history textbooks.

27. The roots of Aryan-Dravidian theory, the racial basis of varna, the artificial construction of linguistic differences, and the Hindu-Muslim cultural divide have been fostered by them.

28. The Aryan Dravidian theory is centered on the Max Mueller thesis that the Rg Veda was written no earlier than 1500 BC, and that carbon-dating of Indus Valley’s Mohendajaro/Harappa first layer excavations place it as ending in 1500 BC. A pastoral society described in Vedas and a city civilization in the latter, could not be of the same people it is inferred.

30. More recently, Mr.Jonah Blank, an American journalist curious about this Hindutva, took a journey in 1991-92 from Ayodhya to Sri Lanka on the route taken by Lord Rama. He then wrote a book about titled: Arrow of the Blue-Skinned God—Retracing the Ramayana Through India [published by the well known Houghton Mifflin of Boston USA]. He writes: “India’s land may be ruled by aliens from time to time, but never her mind, never her soul..... In the end, it is always India that does the digesting" [p.217]. He concludes: “But somehow a nebulous sense of “Indianness” does exist, and it binds together Gujaratis, Orissans, to Nagas who might seem to have nothing at all in common. Perhaps it is this elusive, undefinable [yet very real] link that has allowed the sub-continent's multitude of races to live in some rough semblance of harmony for four thousand years”[p.218].

31. The next mischievous division is the varna’s colour/caste basis. Hinduism nowhere in its Sruti scriptures states varna is skin colour-based. Although varna means “colour”, it was used by the rishis, Bhrigu and Baradwaja, as an insignia colour. Thus if Brahmin is ‘white’, and Shudra is ‘black’, the Kshatriya is ‘saffron’ and Vaishya is ‘Green’!

32. Nor our languages are fundamentally different—Sanskrit vocabulary is common to all languages.Even Tamil has 40% or more words in common with Sanskrit. All our scripts are evolved from Brahmi script.

33. The recent DNA studies affirm that is Indians, i.e., Hindus+, Muslims and Christians are one indigenous people. Hindu culture and religion gives the geographical area its distinctiveness.

34. In the face of DNA evidence of all Indians, plus the reality established by modern science such as satellite imaging, of discovery of the walk trail of Sri Rama, Rama Setu, Sarasvati River, and the submerged Dwarka city, all held earlier as “mythical” to debunk the Vedas and Mahabharata, most independent scholars now have disowned the racial/migration theory of Aryans & Dravidians. Even the BBC and Romilla Thapar have now done so.

35. A social philosophy based thus on dharma is vitally needed at this moment in our history, because there is a dimension to the current national crisis, namely, the moral decay and the decline of character in our society which if not stemmed, will slowly poison to death our nation.

37. Consequent to this decay is the wave of dangerous cynicism amongst the youth. A renaissance of values in society has thus to take place.

1. These then are the core task today: to know the philosophical and civilisational basis of our identity, through a correct perception of our history, and to reform our society on that basis.

2. To achieve such a reform and usher a renaissance, of course, requires a complete de-falsification in the current Indian history, rejecting that portion that has been deliberately contrived by British imperialists and their compradors, and to correct the currently perceived linkages to our past.

3. Thus unless we settle these philosophical issues and answer the factual questions arising in the current version of our history, clearly, finally, unambiguously, and authoritatively, as to who we are and what we were, the modern Indian nation will flounder, flip-flop, and generally be devoid of healthy patriotism, and hence under an intellectual existential siege..

4. Consequently, a de-falsified fact-checked history of India based on Indian sources which is devoid of gloss on the truth of our long civilisational experience and reality of Hindu, Buddhists, Islamic and Christian interactions, is vitally necessary.

5. I congratulate Professor Bal Ram Singh of U. Mass and Rajiv Malhotra for “being different”, and thus giving us a hope that such a history of India would be written by Indians for Indians.