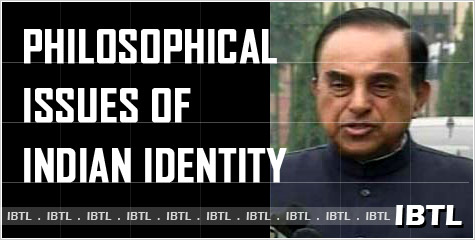 Continued from Understanding the meaning of an Indian Identity : Dr. Swamy

11. From a study of nations that remain united and contrasted with those which have disintegrated, it seems that the crucial element for national integrity is the concept of ‘who we are’ that the people within a geo-political boundary accept. This concept however has to be nurtured, renewed, continually enriched and given substance.

12. Such a concept however cannot be forced down the throats of a people as USSR and Yugoslavia demonstrates or allow the concept to derail a society as it did in Hitler's Germany. At the same time the concept cannot be amorphous, meaning all things to all men, and without a time frame for its acceptance.

13. Even in United States of America, a relatively young nation created by an influx of immigration from diverse countries, scholars have felt the need to define the identity of an American. Harvard Professor Samuel Huntington has penned a book titled Who Are We? [Penguin Books, India 2004] to define the American's identity as a “White Anglo-Saxon Christian who speaks English”. It seems contrived since majority of Americans are perhaps not ‘White’, but Huntington is emphatic.

14. However, Huntington's contribution is in seeing the two components of this identity that define it: Salience, which is the importance that the citizen attributes to national identity over the other many sub-identities. Second, Substance, which he calls as the “American Creed”, is what the citizens think they have in common, and which distinguishes them from others of other countries.

15. Paraphrasing Dr.Huntington, the ‘American creed’ is identified as (i) Anglo-Protestant work ethic (such as sticking to contracts, punctuality, word as bond, honouring IOUs etc.). (ii) Christianity-religious belief in God, in good being rewarded and evil being punished by Him. (iii) English language. (iv) Rule of law and equality before it. (v) Individualism and the pursuit of happiness.

16. Dr.Huntington quotes a 1931 judgment of the Supreme Court in which the apex Court held that US is a Christian nation, and hence he advocates that acceptance of that is part of the American creed. We shall apply the concepts of salience and substance to Indian identity.

17. Similarly, the British Prime Minister Cameron on December 17, 2011 was quoted by BBC as stating at Oxford that “ UK is a Christian country and we should not be afraid to say so”. Addressing a meeting on the 400th Anniversary of the King James’s Bible, he called for a revival of traditional Christian values to counter Britain’s “moral collapse”, adding the slogan “live and let live” has too often come to mean “do what you please”. Significantly, he also said that it was wrong to hold that “standing up for Christianity was somehow doing down other faiths”.

18. We in India today do not have to conjure up a contrived identity as Huntington valiantly had to do, or issue dictums as Cameron. A century ago, Sri Aurobindo declared [as reproduced inIndia’s Rebirth: Institut De Recherches Evolutives, Paris 1993]:“ I write for those who acknowledge reason but do not identify reason with Western Materialism; who are sceptics but not unbelievers; who, admitting the claims of modern thought, still believe in India, her mission, her gospel, her immortal life and her eternal rebirth”.

19. The battle to settle the answer to this question is on today between the Indian nationalist and the internationalist liberal. The latter deny that the Indians have an overriding identity of salience and substance.

20. Eminent philosophers and observers have also held so. India has thus always existed because of the Indian-ness [read: Hindutva as Substance of Huntington] of the people.“In all the fleeting centuries of history” holds Dr.Radhakrishnan in his work on Indian Philosophy, “in all the vicissitudes, through which India has passed, a certain marked identity is visible. It has held fast to certain psychological traits which constitute its special heritage, and they will be the characteristic marks of the Indian people so long as they are privileged to have a separate existence”.

21. Hindu-ness or Hindutva, judged by Huntington’s criteria, has been our identifying characteristic, by which we have been recognized world-wide. The territory in which Hindus lived was known as Hindustan, i.e., a specific area of a collective of persons who are bonded together by this Hindu-ness. That is the Substance.

22. The Salience of Huntington thus was given religious and spiritual significance by tirth yatra, kumbh mela, common festivals, and in the celebration of events in the Ithihasa, viz., Ramayana and Mahabharata. That is why all great mass movements in India have been inspired by spiritual persons, or by invoking spirituality as did Mahatma Gandhi when he made Ram Rajya as a goal, and Gita as the basis of his actions.

23. Even Jawaharlal Nehru, no Hindu chauvinist, acknowledged this fact in on two occasions: First in his 1948 Convocation Address to the Aligarh Muslim University wherein he averred that Hindus and Muslims have the same ancestry, and Second, in his foreword to one of Dr.Karan Singh books as follows: “It is significant to note that great political mass movements in India have had a spiritual background behind them”.

24. But the towering philosophers of the 19th and 20th centuries have affirmed the cultural oneness of India. I can do no better than quote Dr.Ambedkar from his paper presented in the Department of Anthropology seminar of Columbia University in 1916, and titled “Castes in India, Their Mechanism, Genesis and Development”[ published in Indian Antiquary, Vol XLI, May 1917, p81-85].

25. On page 84, he concludes as follows: “Ethnically all people [may] be heterogeneous. [But] it is the unity of culture that is the basis of homogeneity. Taking this for granted, I venture to say that there is no country that can rival the Indian peninsula with respect to the unity of its culture. It has not only a geographic unity, but it has over and above all a deeper and much more fundamental unity—the indubitable cultural unity that covers the land from end to end”