No Saraswati, No Ram Rajya 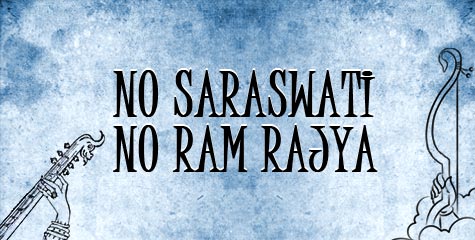 Whenever you ask Indians, either at home or abroad, about what is wrong with India the answer is most certainly always similar. Roads, telecommunications, sanitation, railways, ports, airports, power, water distribution etc. are often summarized in this cliché and somewhat boring answer: Infrastructure. Unfortunately, I wish it were that easy that we could just hire a bunch of Japanese and European infrastructure corporations to pave our way out of lethargy but given the standards of our political leaders (from all parties), this will inevitably end up in a major scam. So, the question now is if infrastructure isn’t the main problem, what is? Simple – illiteracy of the masses.

I believe illiteracy or basically lack of education of the masses is the root cause for nearly all that is wrong in India today. Wherever there is illiteracy, the public automatically and ruthlessly become isolated from mainstream. They can’t read simple contracts, newspapers, political manifestos, laws, rules or instructions which can potentially enable them to improve their health, finances, and working conditions. Thus, they become a burden to their loved ones, neighbourhood, state and subsequently the nation.

Now, when you find yourself in this position as described above, it is of the highest probability that you will end up in poverty. Hungry, homeless and hampered with debt you become an easy target for cunning and sly scavengers trying to fool you for another rupee here or there. However, just as you think you can’t handle it anymore, you consider playing karma roulette by committing suicide and hoping for improved conditions in the next life. Fortunately, you change your mind when you hear the news of an election surfacing in the coming weeks.

In this election, there will be an illusion of choice of many candidates promising you to lift you out of poverty. However, wherever there is illiteracy and poverty, there are also scavengers waiting to prey – either on your money or for your vote. Therefore, simply due to the lust for your vote, this specific politician has emerged to utilize the vacuum decided the best way to campaign is by enticement and due to the fact you are illiterate and poor, you obviously don’t want to hear grand visions for the nation such as development, infrastructure, electricity, universal education etc. The fact is that the ‘nation’ is a distant concept for the poor. Thus, what ends up happening is the candidate that offers grander, noble and more universal visions gets engulfed by the candidate that promises free TVs, food, electricity, water and of course the ‘upliftment’ of your caste. Free is the key word for you and immediate material gain sounds alluring and tempting considering your state because you simply can’t comprehend how roads will benefit you and your family.

Sadly, the politician which enticed with free gifts won the election and has become the Chief Minister. However, he manages to fulfil his promises of temporary supplying free food and coloured TVs clearing him to win the election in 5 years again because ‘free electricity takes time’ and he ‘needs your support next election’ to accomplish the goal. As a result of this, you, poor and uneducated yet happy with your TV and (temporary) supply of free food, put this sleazy politician in the highest of pedestal chanting how he is the defender of your caste and saviour of the poor.

When this sleazy politician is in power, this is when we have corruption which manifests itself in a more political correct term: ‘poor governance’. In this inferior governance, we have poor roads, buildings, crime, “gunda raj”, criminal and political nexuses, immoral police, bureaucracy, economic stagnation etc. Thus, this is the stage where you can use the cliché: no infrastructure.

For that reason, I hope this article has shed some light on the importance of an educated India. We need to set higher standards on our leaders, remove gender discrimination, abolish caste in the psyche of our brethren, decrease child mortality, improve family planning etc. Our politicians are fighting for reservations for Muslims but have any one of these politicians supporting reservations ever suggested in simply building more schools so that all children can start on the same level? They claim caste discrimination is illegal in India, yet for your votes they won’t hesitate to remind you that you are a “Dalit”, “ST” or “OBC” – and yet they blame Sanatan Dharma for the “caste-system”!