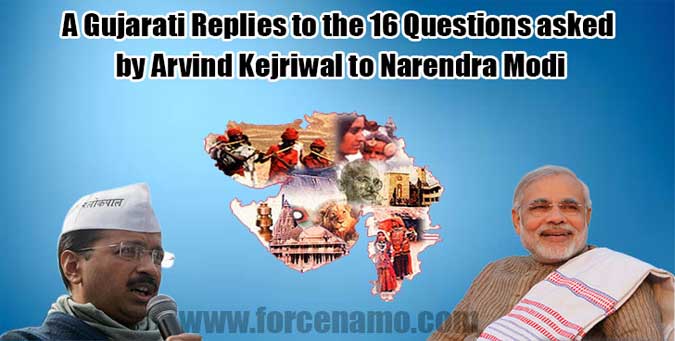 While it is praiseworthy to ask questions in a democray, and make the politicians in power accountable for the work they have done, the nature and intent of such political discourse should be clear and related to pertinent issues. Sadly, this is not the case with the 16 questions raised by Arvind Kejriwal on the performance of Narendra Modi led state government in Gujarat. Being witness to the antics and anarchy propagated by Kejriwal, I take the liberty of answering the 16 questions that have been posed by him to Narendra Modi. However, it would be better if Arvind Kejriwal could do some constructive service to the nation by focusing on the real issues of development and nation building instead of resorting to gain cheap publicity at the cost of sidelining the real issues that people should be focusing on. I also humbly expect Arvind Kejriwal to answer the questions that have been posed for him at the end of this write-up.  Here are the answers to the questions posed by Arvind Kejriwal.

If you become the PM, will you raise price of the KG Basin gas, which has already been doubled by the UPA government to $8 per unit?

This is a highly speculative question, however, to answer your question, please consider these figures. PSU enterprises, led by ONGC produce two thirds of all gas production in India. Reliance produces barely 10%. Hence any rise in the price of gas will benefit ONGC the most, directly contributing in filling up the coffers of the state exchequer. Hence, your allegation that price of gas is being raised to benefit Reliance doesn’t hold ground. The price change in gas has been recommendation by an eminent six member panel headed by C Rangrajan. While you allege that all these experts are on the payroll of Reliance, which is really condemnable, you conveniently hide the fact that this panel was appointed by Shri Jaypal Reddy, the then petroleum minister, who is a known Reliance oppose.

Why does your government buy solar power at Rs 13 per unit? Madhya Pradesh and Karnataka are buying it at Rs 7.50 and Rs 5 per unit, respectively.

I am not sure what you want to convey here. Gujarat is the state that has given India a successful model of the cooperative sector and is the home of ‘Amul’. Holy Cow! Have you conveniently ignored the fact that a White Revolution has already being witnessed in Gujarat and milk production has boosted up by 75% in Gujarat since the last decade? If you research your facts properly, you will be delighted to know that farmers of Gujarat are 7 times richer and agricultural incomes have risen from Rs.14,000 crore in 2001 to Rs.96,000 crore, and this is the figure till 2011. Farmers have been the main beneficiaries of the development in Gujarat.

In the past 10 years, two-thirds of all SMEs have shut down in Gujarat, especially in your home town Mehsana where 140 units out of 187 died away. Do you want to concentrate all power in the hands of a few big industrial houses?

First of all get your facts clear Mr. Kejriwal. Home town of Narendra Modi is Vadnagar, not Mehsana. However, without diverting from your question, please note that India’s 5 per cent population lives in Gujarat which has 6%of the country’s land mass and its GDP share is 10%. Most of this has been contributed by the small and medium industry sector. India’s 70% salt production is in Gujarat and the state also leads in caustic soda production (90%); chemicals (60%); petrochemicals (50%); pharma (40%); and polished diamonds (80%). Salt, pharma and chemicals is largely run by small scale entrepreneurs and is a large contributor to national growth. Also, for your kind information, SME’s have attracted an investment of 17880 Crores in 2012-13 while it was only 3181 in 2006-07, a growth of more than 500%.The employment generated by SMEs in Gujarat has gone up from 76196 in 06-07 to 381083 in 2012-13.

You claim to have eradicated corruption in Gujarat. People here claim that up to Rs 10 lakh bribe is demanded for appointment of a ‘talati’ (revenue official)

This question is again highly speculative without any solid ground. Even then, let me tell you that Gujarat is a state that has won several national awards in the sector of E-governance, and this includes recruitment in the state government as well. Please note that the entire process of recruitment is highly transparent and is done largely online, and everything is documented and available in the public domain. I would urge you to do some homework on the e governance measures taken by Gujarat government before making baseless allegations. And I didn’t know that poor satyagrah that was founded by the father of our nation, who attained martyrdom at Birla House in your own city, in the house of an industrialist? Does the word industrialist represent such a negative meaning for you Mr Kejriwal?  Do the industrialists have a monopoly on practicing corruption? Don’t you travel by a same Wagon R car produced by Suzuki- a Japanese automobile industry giant? Does that mean I can accuse you of being hand in glove with Suzuki just because you drive a Wagon R? Even if you rode all the way from Delhi to Ahmedabad on a Hero Cycle, with your own twisted logic, am I not entitled to accuse you of being in collusion with the cycle manufacturing industry? Give me a break Kejriwal uncle; you need to find something solid against a man who has transformed a state for the better by working continuously since last 12 years. If not, please have the dignity not to raise question just for the sake of asking them and instead focus on doing something constructive.

About 13 lakh people applied for 1,500 posts of ‘talati’ recently. How can you claim to have solved the problem of unemployment?

Please note that people have the liberty of applying for any post and you cannot stop them from this. How can you relate this number with the unemployment figures? You yourself have been a top class revenue official. Don’t you know that Gujarat is one of the top contributors in the tax revenues and other sources of income for the central government? Where does all this money come from if there is no employment, no industry or no development in Gujarat?

Why is your government exploiting young graduates by paying them only Rs 5,300 per month for five years on contract basis?

Kejriwal babu, do you know the salary of a police constable whom you would have never even noticed, but may be entrusted with a job of following you like a shadow just to protect you? I bet it is less than even the Rs 5300 that you have cited. This is a state where entrepreneurship runs in the blood of people. People here are industrious and innovative that they don’t need the crèches of a government job but instead create enterprises that not only sustain them, but also provide jobs to scores of other people. As mentioned in your previous question, there was a moratorium on recruitment in the state government. In Gujarat, we don’t believe in creating a bloated and inefficient bureaucracy whose specimen you yourself were in the beginning of your illustrious career, but instead believe minimum government and maximum governance.

There are only three teachers to teach 600 students at some schools. What is your comment?

This may be the case in some handful villages, but if you could have specified the schools and their respective areas where this is the case, then it would have been much better. Still, even if your accusation is taken on its merit, isn’t this situation better than hiring teachers indiscriminately without the considerations of quality and knowledge? In other parts of India, this is a huge problem, where teachers are hired, but who don’t even show up in schools. In a state as large as Gujarat, with nearly 18,500 villages, this may be the case. However, don’t compare this with your city state of Delhi, predominantly with urban population, which you couldn’t even govern for two months? Nobody holds a magic wand Mr Kejriwal, by the merits of which one can make all the ills and poverty disappear. But you should at least try to give due credit to the administration in Gujarat that has made positive difference in the lives of rural populace.

Medical and health services are in a shambles.

Oh yes Kejri babu, the emergence of Ahmedabad as a medical tourist hub is not the truth, but must be the construction of the same paid media who is busy in glorifying you and your antics. I myself have seen foreign tourists arrive in the hospitals of Ahmedabad in droves, as it provides top class treatment at affordable prices. But no, for you, this to you seems just a conspiracy hatched by the foreign powers who purposely send medical tourists to Ahmedabad for fulfilling their own agenda. Needless to say, majority of them are from African countries, so one of your ministers, known to be xenophobic, may have objections to this. But this is not the point, Kejri babu. The point is Gujarat is the state where Jyotigram Yojana of Gujarat and accepted its role of positive transformation in the lives of rural population of Gujarat? Ah, even the Stockholm guys must have been paid up, isn’t it Mr Kejriwal? Only the Ford Foundation folks are honest, isn’t it?

Sardar Sarovar dam’s height was raised in 2005 but people of Kutch have not got water. Industries have been given water. Why?

I think Medha Patkar, the illustrious party member of AAP can provide you with a detailed insight on this. Isn’t Medha Patkar the same person who is opposing tooth and nail the creation of Sardar Sarovar dam in the very first place? If Medha had her way, forget about raising the height, the dam would not have even been constructed in the first place. And I am not even raising the point of the innumerable benefits that this project has given to the nation, starting from the production of clean and green hydro electricity to the boost in agricultural production. Perhaps, the way you have been treating the discoms in Delhi, I think you prefer having a ‘candlelight dinner’ every night instead of bearing the bright and intrusive electricity being produced by the corrupt industrial houses.

Despite assurances, the Gujarat government has not withdrawn court cases against Sikh farmers of Kutch who have lost their land. Why?

I take the liberty of quoting Narendra Modi’ words in his Punjab rally on 23delhi janta darbar before quitting in just less than two months to ask the permission of the very same people who elected you in hopes of getting good and corruption free governance in the very same way you held a SMS poll for asking their opinion on forming the AAP government in Delhi?

Why don’t you drive a Tata Nano instead of a Wagon R? Don’t you think Tata Nano is the true symbol of the common man whom you claim to represent? Or do you think that just because Nano is manufactured in Gujarat, it is not worthy of you?

Before going on a bandobastthat is diverted towards managing the ruckus created by you and your party workers that leads rapists free to prowl on innocent women in Dehli- the rape capital of India? Who clears all the litter and the garbage that your dharna against this?

Last but not the least, Mr Kejriwal, I am curious to ask you this. Are you a pass-out of National School of Drama located in Delhi?