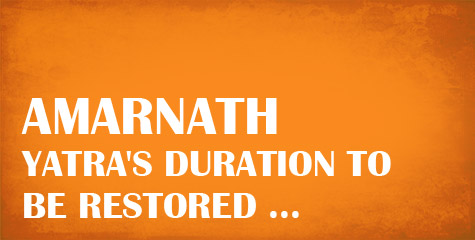 Leader of Opposition in Rajyasabha Arun Jaitley raised the issue of curtailing the duration of Shri Amarnath Yatra  during Zero Hour in Rajya Sabha yesterday, telling the house that it seemed to be "a systematic pattern'' to reduce the duration of the holy yatra over the last few years.

Below is the transcript of Arun Jaitley’s speech in Rajyasabha yesterday:

Leader of Opposition (ARUN JAITLEY) : Mr. Vice Chairman Sir, I am grateful to you for allowing me to raise a matter of importance to this country. I wish to draw the attention of the Government to a systematic pattern in the last few years to reduce the duration of Shri Amarnath Yatra. It is a historic yatra. It has a historical, religious and cultural significance to this country. It starts from Jammu with the conventional Chhadi Mubarak and reaches the shrine on the Raksha Bandhan day. And, who better than Dr. Karan Singh knows the whole history. It’s a yatra where a very large number of pilgrims, and the figure last year has reached about eight lakh people, reach the shrine. All services for this are provided by the Kashmiri people. So, besides being a great religious event, it also generates a lot of economic activity in the valley.

In 1996, because of adverse weather conditions, some people lost their lives. The Government, at that time, had appointed the Nitish Sengupta Committee which had recommended that a Board be constituted which would make all arrangements for this particular yatra. I was going through some of the available literature. Literary evidence indicates that in 1950s, it used to last for about four months, and the number of people, who used to visit the shrine, was about 35 to 40 every day. But, it used to continue for four months. Thereafter, the Board, once it was constituted, organized a yatra for a period of 60 days. Now, from 60 days in 2009, each year, the number of days started reducing. In 2010, it became 55 days. In 2011, it became 45 days. This year, I am given to understand that the effort is to bring it down to 39 days. The duration, from four months, came down to two months after the board was constituted, and now it is going to be brought down to 39 days this year.

Sir, this is going to cause a lot of inconvenience to the number of people. Nitish Sengupta had said that not more than 20,000 people must visit the shrine on a given day; otherwise, it could have various consequences on the ecosystem. Now, on 39 days already, if we take last year’s figure, it will cross 20,000; it will go up to 22,000 to 23,000. The number of people is increasing every year, and, therefore, who are the people interested reducing the duration of this yatra? Certainly, they are not the pilgrims; not the Kashmiri people because they are also benefitting a lot from this yatra…They are, in fact, actively co-operating with this yatra.There is a very small section of separatists who have been issuing periodic threats on this. Efforts have been made between 2000 and 2006 to have attacks on this yatra. Some people lost their lives also. But now that the situation in the Kashmir Valley has substantially improved, there is no such danger either.

Therefore, I would like to urge the Government, I am glad that the Hon. Prime Minister is here, to consider this fact and, therefore, the duration of this yatra should be restored to what it was originally.