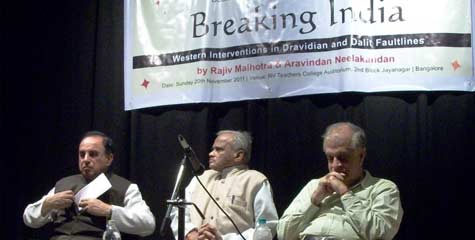 Noted Indian-American thinker Rajiv Malhotra's book that details the nefarious design of Western powers to split India, was released last week at Bangalore. The book throws ample light on the conspiracies being hatched by the west funded Church-funded powers for instilling a false sense of victimhood and identity separatism among India's underprivileged classes. Dr. Subramanian Swamy, currently the most successful anti-corruption warrior in India, and a published scholar on Hindu nationalism himself, released the book in a simple ceremony. Well known educationalist Prof P V Krishna Bhat, who's the National Convenor of Prajna Pravah was also present at the function, held at the R V College auditorium at Jaynagar, Bangalore.

The lead author Rajiv Malhotra is a public intellectual on current affairs, world religions and cross-cultural encounters between East and West. His work argues that 'Dharma' offers a complex and open framework for a genuine dialogue among diverse peoples. He shows the limitations of globalization when it is a parochial imposition of Western paradigms. He serves on the Board of Governors of the India Studies program at the University of Massachusetts, and served as a Chairman for the Asian Studies Education Committee of the State of New Jersey. His Infinity Foundation, seeks to foster a better global understanding of Indian civilization. The book is co-authored by Aravindan Neelakandan who has worked as a Junior Research Fellow in Cultural Economics under the Ministry of Tourism of Government of India and for the past decade with an NGO in Tamilnadu serving marginalized rural communities in sustainable agriculture.

The book is titled as "Breaking India : Western Interventions In Dravidian And Dalit Faultlines" and focuses on the Dravidian and Dalit identity separatism being fostered by the West in the name of human rights, which it spells as one of the three existential threats being faced by India, the other 2 being Pakistan funded Islamic radicalism, and China influenced Maoists and Marxist radicals. The book elaborates on the role of U.S. and European churches, academics, think-tanks, foundations, government and human rights groups in fostering separation of the identities of Dravidian and Dalit communities from the rest of India.

The book is the result of five years of research, and uses information obtained in the West about foreign funding of these Indian-based activities and tracks the money trails that start out claiming to be for “education,” "human rights," “empowerment training,” and “leadership training,” but end up in programs designed to produce angry youths who feel disenfranchised from Indian identity. The book reveals how outdated racial theories continue to provide academic frameworks and fuel the rhetoric that can trigger civil wars and genocides. The book explicitly names individuals and institutions, including prominent Western ones and their Indian affiliates and claims to spark an honest debate on the extent to which human rights and other “empowerment” projects are cover-ups for these nefarious activities.