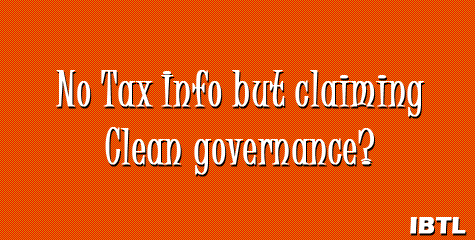 ‘Sonia declines to provide tax information’ was a news item that appears in the papers on the 25th Feb. She has cited person freedom and security risk. One is puzzled on what security risk is there if she discloses her tax returns. Does this security risk pertain only to Mrs Sonia and not to the others who disclose their income tax returns? She has also cited personal freedom. Does personal freedom is an exclusive right of Mrs Sonia. So the others who disclose their income tax returns have no personal freedom. It looks that Mrs Sonia Gandhi is afraid and is not comfortable in this area because she has much to fear. It is a known fact that she has amassed assets and wealth disproportionate to her known income.

It seems that only Mrs Sonia Gandhi has the right to privacy. Transparency is a must for all public servants and Mrs Sonia Gandhi is no private person. If all MPs can disclose their incomes and if others who are requisitioned under the RTI can oblige what is the problem with Mrs Sonia Gandhi. How can she claim to her income tax returns are ‘private in nature’ This cannot be allowed to go without being challenged. It seems that Mrs Sonia Gandhi is not all that clean in this area. There have been time and again the alleged accusations that money-looted has flowed into her kitty. If this is to be disclaimed then it is for her to be more transparent in her money affairs. She is a public personality and has to disclaim these allegations through her readiness to be transparent.

One cannot have two yardsticks-one for the other politicians and one for her. What is this exclusive right she is claiming? I do not know how the Chief public information officer will take this forward. It seems that Mrs Sonia Gandhi and her children are enjoying unfettered rights-they are outside the overview of the ordinary law.

Similarly for the CBI to turn down the plea of Dr Swamy on probing Mrs Sonia Gandhi’s role in Bofors is also unacceptable. The claim of the CBI director that unless new evidence was presented the case cannot be reopened does not hold water. But new evidence will surface only if Mrs Sonia Gandhi is probed .Evidence will not fall from the heavens. When it has been stated by both the CBI records and the Swedish authorities that Indian agencies had failed to interrogate Mrs Sonia Gandhi it reveals a fraud played on the people of India, There seem to be a cover-up. Why this sheltering of Mrs Sonia Gandhi against even justice. She has to be exposed and she should readily accept to be probed if she is clean.

In the disclosure of the income tax returns also Mrs Sonia should be treated as others and compelled to disclose. There seems to be something fishy and stinking. Escaping the disclosure directly points at some thing Mrs Sonia has to hide. It makes her a alleged defaulter and more doubts are created. No matter how high you are the law is above you Mrs Sonia Gandhi. And she goes about campaigning that the Congress is against corruption and wants clean governance. The test of the pudding is the eating of it. It is for Mrs Sonia Gandhi to stand this test of transparent and fight against corruption in her own affairs when it comes to income and probe on the Bofors issue. Otherwise these two will stick to her permanently –who is she afraid of? She cannot demand of others what she herself is refusing to undergo. This is exactly what I had written of the forked tongued Congress. And what is she afraid of? A dirty HAND cannot usher in clean governance.

# Sonia refuses to disclose IT info, income could be between Rs 50-75 lakh
# BBC man Mark Tully warns India against Sonia's dynasty politics
# Sonia Gandhi - 'Holy' only in Indian media, not so abroad? : IBTL