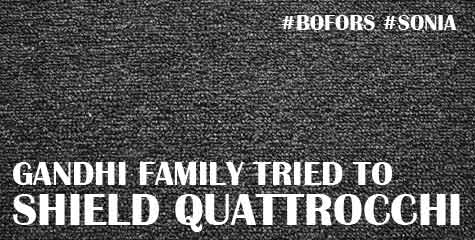 Like Banco's ghost at Macbeth's table, Bofors refuses to go away. Every time Congress thinks the gun has fallen silent for the good, it booms again. The barrel of the Bofors gun now points unmistakably towards Sonia Gandhi, if journalists would only show the courage and perspicacity to collate facts and interpret them correctly. Politicians as a class are too compromised to attempt this.

With characteristic shamelessness, some Congress leaders demanded an apology from the opposition parties for leveling allegations against Rajiv Gandhi of accepting a bribe in the Bofors gun scandal. They did so following the recent interview given by Mr. Stan Lindstrom, former chief of Swedish Police who inquired into the Bofors swindle, saying that there is no available evidence that bribe money made it to Rajiv Gandhi's bank account.

Family loyalists glossed over a far more damaging assertion by the same investigator: Rajiv Gandhi watched the massive cover-up in India and Sweden and did nothing. Why?

The clue to the political beneficiaries of Bofors payouts is money received by the British company A.E. Services. In criminal law parlance, A.E. Services is the smoking gun. In November 1985, Colonel Bob Wilson, A.E. Services' lawyer who had served in the Gorkha Regiment, wrote a letter to Bofors MD, Martin Ardbo, offering to help him secure the gun contract from the Indian government by 31 March 1986 in return for 3 per cent commission.

The offer was clear: pay us if and only if you get the contract by 31 March 1986. Nothing was to be paid if the contract was not secured at all or secured after that date. When the offer was made, French company Sofma was the front runner among the shortlisted companies. As it happened, Bofors secured the contract on 24 March 1986. Prime Minister Rajiv Gandhi then handled the defence portfolio himself.

We now know that behind A.E. Services stood Italian businessman Ottavio Quattrocchi. Money paid to A.E. Services found its way into bank accounts controlled by Quattrocchi and his wife. Over $7 million was paid from A.E. Services to Colbar Investment of which Quattrocchi was the direct beneficiary.

The logical question to ask is: who can make such an offer and also fulfill it? How can an Italian businessman swing such a large deal which had a direct bearing on Indian national security? It is an understatement to say that he was very close to the decision maker(s). It may be more accurate to say that he was acting as a dummy for them. That alone could give him the confidence to make the kind of offer he did.

How Rajiv Gandhi and subsequent governments beholden to the Gandhi family tried to shield Quattrocchi is by now well known and well documented. How he was allowed to slip out of the country by the Narasimha Rao government, how nobody in Sweden or Switzerland was allowed to question him, how he flew out of Malaysia over the weekend before a plea for his extradition to India could come up in court on Monday, how after being arrested by Interpol in Argentina he walked free because CBI goofed up in furnishing documents, how his bank accounts in London were allowed to be de-frozen and how he cleansed them the next day - all this is too well known to need repetition.

The relevant question is: Why was this Italian businessman of such tremendous importance to the Prime Minister of India that he staked the survival of his own government to ensure that he never opened his mouth? Whom was Rajiv Gandhi trying to protect by shielding Quattrocchi? Would he do all this for an Italian businessman or for someone far nearer and dearer? The answer is easy to guess, though only Quattrocchi can confirm the same.

It would not have been difficult to establish the truth if even one government since had taken genuine interest in getting to the bottom of the case. Congress governments headed by Rajiv Gandhi, Narasimha Rao and Manmohan Singh could hardly have been interested in pursuing the case, for obvious reasons. Governments beholden to Congress, such as those headed by Chandrashekhar, Deve Gowda and I.K. Gujaral would also not wonder in the vicinity of the truth for their own survival.

That leaves only the V.P. Singh and A.B. Vajpayee governments which could have followed the case in a meaningful manner. V.P. Singh had Arun Nehru as an important member of his cabinet and party. Arun Nehru was directly linked to the deal and even found a mention in Martin Ardbo's diary under the code name N and Nero. V.P. Singh himself was more interested in milking the scandal for political gains. His government registered a case and had some Swiss accounts frozen, but did little else. Lindstrom tells us that Indian investigators who came to Sweden were more interested in implicating Amitabh Bachchan in the case than anything else, for reasons that remain unclear to this day.

The country had high hopes from the Vajpayee government. Not only was it beyond the shadow of the Gandhi family (or so one thought), but it also included Arun Shourie who had played a major role in exposing the scandal as firebrand editor of Indian Express. But its record on Bofors was no better than that of others. Who tied its hands? For whose benefit? The Hindujas were recipients of the Bofors commission and were said to be close to some BJP leaders. The BJP leadership therefore cuts a sorry figure when it demands a fresh probe into the scandal.

Why rake up the mud now? Because there are worrying similarities between 1980s and now: a rudderless government, a faltering economy, an insurgent anti-corruption movement, and weakness on the external economic front. As then, so now, India's defence procurement is insufficiently transparent, and open to misuse by influence peddlers. India is still not proactive enough in catching those using offshore accounts to bypass Indian law. And the central figure in the Bofors saga continues to call the shots.

Tailpiece: "In 2004, when I asked Lindstrom to name some living persons who had full details of the Bofors kickbacks he responded without hesitation, 'Martin Ardbo, Ottavio Quattrocchi and Sonia Gandhi.'" - Seema Mustafa, DNA, 27 April 2012.