Mumbai: Is it a new beginning for BJP? 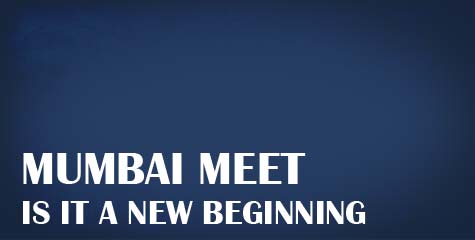 The two day National executive meet of the BJP ended with a public rally in Mumbai. The rally clearly witnessed the arrival of new age leaders to the national stage. With all the confusion, disgruntlement & difference of opinions that existed within the leadership & the cadres for the last few months post the debacle in the UP elections, the Mumbai meet brought in some much needed freshness with mass leaders taking the lead in burying / sorting their differences & with a full house attendance. I have put forward my views on how the first positive step was taken in the meet here.

A dias with Nitin Gadkari, Narendra Modi, Arun Jaitley, Shivraj Singh Chauhan and Raman Singh together addressing a public gathering was treat indeed. Had Manohar Parrikar, Yeddyurappa & Vasundhara Raje attended the public rally, it would have been picture perfect. Ms.Sushma Swaraj was missed & she couldn't be there because of her prior commitments. The fascinating part of this meeting was the visible camaraderie amongst the regional leaders. Each of these mass regional leader had a story which explained how they contributed to their people. The stories ranged from surplus agri growth to energy to social security for women , girl child & laborers & how the people of those states have prospered economically. In any political rally one gets to hear the political rhetoric's & promises. But for a change, the people who attended the Mumbai rally & all those who saw it live on the web stream, heard stories of transformation & economic independence / growth. From Raman Singh who did not succumb to the pressures of the maoists, to Shivraj.s.Chauhan, who is empowering the girl child with education & economic independence to Narendra Modi, who has made the Gujarat development, a model that not only every state but other countries too want to emulate.

This is the narrative that the young India of today is looking for. They are looking for solutions & alternatives which the current BJP chief ministers & the mass leaders have. The BJP has also been fortunate to have some very dynamic ladies in its ranks. With Sushma Swaraj the current LOP in Lok Sabha to Vasundhara Raje, Nirmala Sitharaman, Smriti Irani & Meenakshi Lekhi to name a few. These ladies are highly opinionated & are treated with great respect for their knowledge in various aspects by the rivals too. By not attending the rally due to prior engagements Sri L.K.Advani Ji has by default ensured that next generation take over the center stage. BJP biggest asset today is that all the regional mass leaders are not from any dynasty. They are all self made who worked through rank & file. Very unlike congress where only the Dynasty has the final right & no qualification or credentials matter. However the one point that many political parties miss is a proper succession plan. Its not much of an issue in Dynastic parties like the Congress, DMK, BJD, SP & RJD to name a few. But the cadre based parties like the BJP have an issue there.

Time and again, we have seen the succession being a major issue. The lack of proper primaries has always haunted the party's succession plans. Therefore the dissidence caused by this is the biggest problem that needs to be addressed at the organisational level. This is one area Mr.Gadkari should use his experience as a responsible Sangh worker & put in a proper succession plan. With the senior leaders like Sh Advani, Rajnath & M M Joshi having taken a back seat and having settled his differences with Narendra Modi now, Mr.Gadkari can do some reforms in this order within the party. Now there should be a clear clarity that Modi will be the political face & Gadkari will be the Organisational face, both leaders must give enough space to each other to perform their duties without any further misunderstandings.

What has transpired in the Mumbai meet is just "one positive step" in the right direction. The new team will be tested with lot more hurdles. The biggest test for the new team will be how they synchronize their collective wisdom for a national narrative. Yes it is true that there is large visible wave against Congress & the UPA in the country but that does not mean it is going to be an easy ride to Delhi. How Nitin Gadkari & Narendra Modi address various issues within the party going forward will determine the success of BJP. Lets not forget that unless BJP achieves substantially, the idea of NDA is meaningless ………………………


Previous Opinion
# Uttar Pradesh voter Packs off (white) Elephants
# Political Self destruction is now an Art Form
# Prepoll or Post poll on the Road to Delhi?