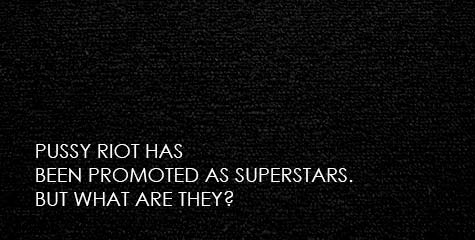 Universally admired, Pussy Riot (or PR for short) has been promoted as superstars. But what are they? A rock or punk group they are not. A British journalist marvelled: they produce no music, no song, no painting, nada, rien, nothing. How can they be described as “artists”? This was a severe test for their supporters, but they passed it with flying honours: that famous lover-of-art, the US State Department, paid for their first ever single being produced by The Guardian out of some images and sounds.

We are able to stomach obscenity and blasphemy; I am great admirer of Notre Dame de Fleurs by Jean Genet, who combined both. However the PR never wrote, composed or painted anything of value at all. Chris Randolph defended them in Counterpunch by comparing them with “the controversial Yegor Letov”. What a misleading comparison! Letov wrote poetry, full of obscenity but it still was poetry, while the PR have nothing but Public Relations.

Even in these dubious pieces of art their role was that of technical staff: the glory went to a Russian-Israeli artist Plucer-Sarno of Mevasseret Zion, who claimed the idea, design and copyright for himself and collected a major Russian prize. The future PR members got nothing and were described by Plucer as “ambitious provincials on the make”, or worse.

Lately they have tried to ride a bandwagon of political struggle. That was another flop. They poured a flood of obscene words on Putin - in Red Square, in subway (underground) stations - with zero effect. They weren’t arrested, they weren’t fined, just chased away as a nuisance. And they did not attract attention of people. It is important to remember that Putin is an avowed enemy of Russian oligarchs, owners of the major bulk of Russian media and providers of the Moscow literati, so they print on daily basis so much anti-Putin invective that it’s lost its shock value. You can’t invent a new diatribe against Putin – it has been already said and published. And Putin practically never interfered with the freedom of the press.

My foreign journalist friends are usually amazed by unanimity and ferocity of anti-Putin campaign in Russian media. It can be compared with the attacks on G.W. Bush in the liberal papers in the US, but in the US, there are many conservative papers that supported Bush. Putin has practically no support in the mainstream media, all of it owned by media barons. A valuable exception is TV, but it is expressly apolitical and provides mainly low-brow entertainment, also presented by anti-Putin activists like Mlle Xenia Sobtchak. So PR failed profoundly to wake up the beast.

Eventually the young viragos were mobilised for an attack on the Church. By that time they were willing to do anything for their bit of publicity. And the anti-Church campaign started a few months ago, quite suddenly as if by command. The Russian Church had 20 years of peace, recovering after the Communist period, and it was surprised by ferocity of the attack.

Though this subject calls for longer exposition, let us be brief. After collapse of the USSR, the Church remained the only important spiritual pro-solidarity force in Russian life. The Yeltsin and Putin administrations were as materialist as the communists; they preached and practiced social Darwinism of neo-Liberal kind. The Church offered something beside the elusive riches on earth. Russians who lost the glue of solidarity previously provided by Communists eagerly flocked to the alternative provided by the Church.

The government and the oligarchs treated the Church well, as the Church had a strong anti-Communist tendency, and the haves were still afraid of the Reds leading the have-nots. The Church flourished, many beautiful cathedrals were rebuilt, many monasteries came back after decades of decay. The newly empowered church became a cohesive force in Russia.

As it became strong, the Church began to speak for the poor and dispossessed; the reformed Communists led by the Church-going Gennadi Zuganov, discovered a way to speak to the believers. A known economist and thinker, Michael Khazin, predicted that the future belongs to a new paradigm of Red Christianity, something along the lines of Roger Garaudy’s early thought. The Red Christian project is a threat to the elites and a hope for the world, he wrote. Besides, the Russian church took a very Russian and anti-globalist position.

This probably hastened the attack, but it was just a question of time when the global anti-Christian forces would step forward and attack the Russian Church like they attacked the Western Church. As Russia entered the WTO and adopted Western mores, it had to adopt secularization. And indeed the Russian Church was attacked by forces that do not want Russia to be cohesive: the oligarchs, big business, the media lords, the pro-Western intelligentsia of Moscow, and Western interests which naturally prefer Russia divided against itself.

This offensive against the Church began with some minor issues: media was all agog about Patriarch’s expensive watch, a present from the then President Medvedev. Anti-religious fervour went high among liberal opposition that demonstrated against Putin before the elections and needed a new horse to flog. A leading anti-Putin activist Viktor Shenderovich said he would understand if the Russian Orthodox priests were slain like they were in 1920s. Yet another visible figure among the liberal protesters, Igor Eidman, called to “exterminate the vermin”- the Russian Church – in rudest biological terms.

The alleged organiser of the PR, Marat Gelman, a Russian Jewish art collector, has been connected with previous anti-Christian art actions which involved icon-smashing, imitation churches of enemas. His – and PR’s problem – was that it was difficult to provoke reaction of the Church. The PR made two attempts to provoke public indignation in the second cathedral of Moscow, the older Elochovsky Cathedral; both times they were expelled but not arrested. The third time, they tried harder; they went to St Savior Cathedral that was demolished by Lazar Kaganovich in 1930s and rebuilt in 1990s; they added more blasphemy of the most obscene kind, and still they were allowed to leave in peace. Police tried their best to avoid arresting the viragos, but they had no choice after the PR uploaded a video of their appearance in the cathedrals with an obscene soundtrack.

During the trial, the defence and the accused did their worst to antagonize the judge by threatening her with the wrath of the United States (sic!) and by defiantly voicing anti-Christian hate speeches. The judge had no choice but to find the accused guilty of hate crime (hooliganism with religious hate as the motive). The prosecution did not charge the accused with a more serious hate crime “with intent to cause religious strife”, though it could probably made stick. (It would call for a stiffer sentence; swastika-drawers charged with intent to cause strife receive five years of jail).

Two years’ sentence is quite in line with prevailing European practice. For much milder anti-Jewish hate talk, European countries customarily sentence offenders to two-to-five years of prison for the first offence. The Russians applied hate crime laws to offenders against Christian faith, and this is probably a Russian novelty. The Russians proved that they care for Christ as much as the French care for Auschwitz, and this shocked the Europeans who apparently thought ‘hate laws’ may be applied only to protect Jews and gays. The Western governments call for more freedom for the anti-Christian Russians, while denying it for holocaust revisionists in their midst.

The anti-Putin opposition flocked to support the PR. A radical charismatic opposition leader, the poet Eduard Limonov wrote that the opposition made a mistake supporting the PR, as they antagonise the masses; the chasm between the masses and the opposition grows. But his voice was crying in the wilderness, and the rest of the opposition happily embraced the PR cause, trying to turn it into a weapon against Putin. The Western media and governments also used it to attack Putin. The Guardian editorial called on Putin to resign. Putin called for clemency to the PR, and the government was embarrassed by the affair. But they were left with no choice: the invisible organisers behind PR wanted to have the viragos in jail, and so they did.

Commercially, they hit jackpot. With support of Madonna and the State Department, they are likely to leave the jail ready for the world tour and photo ops at the White House. They registered their name as a trade mark and began to issue franchises. And their competitors, the Femen group (whose art is showing off their boobs in unusual places) tried to beat the PR by chopping down a large wooden cross installed in memory of Stalin’s victims. Now sky is the limit.

In August, vacation season, when there is not much hard news and the newspaper readers are at the seashore or countryside, the PR trial provided much needed entertainment for man and beast. Hopefully it will drop from the agenda with the end of the silly season, but do not bet on it.