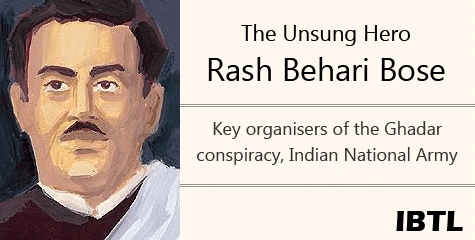 Rash Behari Bose (1886-1945) was one of the great revolutionaries of the first half of the 20th century. Born on May 25, 1886 at Palarabighati (West Bengal), Bose joined the Revolutionary Party at an early age. He organised several clandestine activities in Uttar Pradesh, Delhi and Punjab. He came into limelight when he threw a bomb on Lord Hardinge's (the then Viceroy of India) procession in Chandni Chowk, Delhi on December 23, 1912.

Lord Hardinge, in his My Indian Years, described the whole incident in an interesting way. During the flood relief work in Bengal in 1913, he came in contact with Jatin Mukherjee in whom he "discovered a real leader of men," who "added a new impulse" to Rash Behari's failing zeal. Thus, during World War I he became extensively involved as one of the leading figures of the Ghadar Conspiracy that attempted to trigger a mutiny in India in February 1915. Trusted and tried Ghadrites were sent to several cantonments to infiltrate into the army. The idea of the Jugantar leaders was that with the war raging in Europe most of the soldiers had gone out of India and the rest could be easily won over. The revolution failed and most of the revolutionaries were arrested. But Rash Behari managed to escape British intelligence and reached Japan in 1915.
- - - - - - - - - - - - - - - - - - - - - - - - - - - - - - - - - - - - - - - - - - - - - - - - - - - - - - -
In March 1942, he organised a conference to set up an Indian Independence League, the first session of which was held in June 1942 at Bangkok. He was then elected President of the Council of Action for the formation of INA. He mobilised Indian soldiers taken as prisoners of war by the Japanese forces for an armed rebellion against the British rule. In 1943, he handed over the charge of INA to Subash Chandra Bose in Singapore. Bose died in Tokyo on January 21, 1945.
Source : Wiki & Presevedarticle