Within 24 hrs of forming govt, will launch probe into Maya's scams : BJP 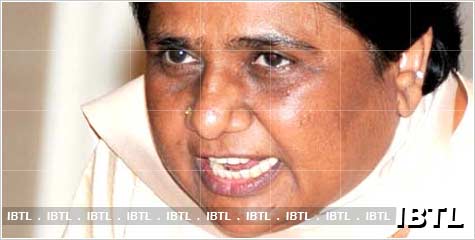 BJP’s vision document for Uttar Pradesh, to be launched by President Nitin Gadkari on 16th January promises among other things, setting up an enquiry commission to probe into the scams of Mayawati government. The document also promises to give 35 Kg of rations per month with rice at Rs. 3 and wheat at Rs. 2 per kg. It promises to launch the successful schemes of other BJP ruled states like the Ladli Laxmi scheme of MP government, Jyotigram of Gujarat which made it produce 4000 MW more power than it needs while 10 years ago, it produced 2000 MW less than its need. Although by sacking half her cabinet for Corruption, Mayawati had made a ditch effort to improve her image which is otherwise severely marred with corruption, but a fact is that opposition BJP had issued a list of 100 scams of Mayawati government months ago.

IBTL looked at the chargesheet of BJP. Its prime points are –

BJP has thus charged Maya government to be involved in scams of this mammoth proportion totalling to 2.76 trillion Rupees (Rs. 2540000000000) from just these 11 scams. BJP alleges that there is not a single government scheme which is free from large scale scams. The arrest of a BSP MLA Shekhar Gupta in connection with the murder of Engineer Manoj Gupta who had refused to pay the share for Mayawati’s birthday celebrations, is a burning example of how serious the situation is, in Uttar Pradesh.

The judicial and CBI probes have established that the cereals meant for Antyodaya, Mid-day meal, and Ration schemes are being black-marketted in Bangladesh. This alone has resulted in a scam of over 2 Lakh Crore rupees. The Indira Housing Scheme meant for the poor has gone into the clutches of the rich. The houses already built are being labelled as built under this scheme. Even the houses built under the Kanshiram Urban Residential Scheme have been allotted to BSP’s middlemen. So many of the allotments are under fraud names or anonymous.

BJP further alleges that Maya government spent over 2000 crores on the building of monuments and even for its election symbol Elephant. For these monument, a square foot of stone was bought for 1200 to 4000 rupees while the market price was 400 Rs. Per square foot only. For mining, the monthly, tri-monthly, and half-yearly leasing rights were given to Ponti Chaddha. Around 5000 trucks of material is transported from Bundelkhand region. Each truck has to pay Rs. 5100 but gets a receipt only for Rs. 2100 in return. UPA’s NREGA scheme is also marred with scam worth over 2500 Crores. There is abundance of fake people getting the benefit. In Meerut, out of 30000 labours, only 9756 were assigned the work, and only 942 got work for full 100 days. In Lucknow, ponds were dug with the cost of over 64 Crores, but none of them had water. 72 government officers have been suspended for corruption in NREGA. In Gonda, the Collector purchased toys worth Rs. 1 Crore with the money meant for NREGA.

In NOIDA and Greater NOIDA, the forceful abduction of farming land and its subsequent allotment to industrialists involved a scam of over 1 Lakh crores. 162 Acre land in sector 25 A and sector 32 was sold for Rs. 85000 per sq mt while the market price was between 7 lac and 8 lac Rs. Per sq mt. For the Group Housing scheme, market price of land was between 12000 to 17000 Rs. Per sq mt but the government accepted the bid for Rs. 3825 per sq mt. Similarly, commercial plots were sold for Rs. 6731 per sq mt while actual market price was between 25000 to 30000 Rs. Per sq mt. State owned Sugar mills worth 25000 Crores were sold at throw away prices. The selling procedure was set with intentions to benefit Maya’s kin and to rule out others. Nekpur Sugar mill with market price of 800 Crorse was sold at 14 Crores only. Saharanpur mill was sold for 35.85 Crores while market price was 800 Crores. Ponti Chaddha, was the biggest beneficiary.

Fake colleges are being opened in UP and students are being robbed. In 2010, 20 Lakh candidates applied for the BTC. The application fee was Rs. 400 per candidate, but then, exams were cancelled. There is a fixed bribe to get admission in colleges. Government pays the fees for SC/ST students but even there, there is a scam of 400 Crores. The pension schemes meant for the elderly, widown and handicap is being milked by fake people. In Behraich district, there are 86035 names registered for the elderly pension. Out of that, 17400 names are fake. In Azamgarh district, widow pensions were secured with fake documents. Criminal cases have been registered against 28 people for the same. The CAG report issued in February 2010 said that at least 68 government departments in UP are such where corruption is endemic. There were 17429 cases of financial misconduct uncovered in just 2 years. The 2008-09 CAG report says that 2400 Crores were allotted for the development of backwards districts, but the number of backwards districts grew from 9 to 15.

BJP concludes the allegations saying that if this money worth Rs. 2540000000000 were to be distributed among the public, each family of UP would have got 50000 Rs. Rest, the decision rests with the public only. It’s been the history of our country that even 100 offences of a wicked Shishupal were condoned by Shri Krishna but a righteous Yudhishthir had to pay a heavy price with his wife and brothers, for his one mistake (Game of dice). Similarly, the scams of Maya government are long forgotten, and BJP has burnt its hands in Kushwaha flame. [Party with a difference - BJP through Kushwaha's prism, in contrast with Congress]

(The facts and figures are based on the chargesheet issued by the BJP. IBTL accepts no responsibility in their factual accuracy).