Marriages are made in Heaven 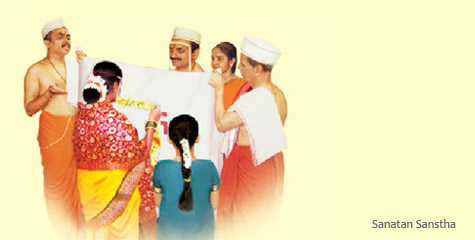 Marriage is one of the main institutions  of human civilization. In the sixteen sanskars, emphasis is laid on the sanskar of marriage. Marriage formalizes the relationship between a woman and a man. Similarly the social relations of the children born to the couple are official. The institution of a family is dependent on that of marriage. Hence, the social laws influence this sanskar of marriage. This article discusses these factors which play such an important part in the life of couple.

Marriage i.e. Vivaha or udvaha is taking the bride from the home of her father to the groom’s home. There are three types of marriagesas per Hindu scriptures. Panigrahan: The groom should hold the bride’s hand, to accept her as his wife. Upayam: Going close to the bride or accepting her. Parinay: Holding the bride’s hand and circumambulating the fire.

Marriages  liberate oneself from the debt to God and one’s ancestors. Most of the rituals in marriage are associated with procreation which is essential to achieve liberation from these debts. When a son is born  into a family, he performs ritualistic worship (puja), sacrificial fires (yadnyas), . and other rites, which helps in liberation from the debt towards God. By performing a ritual for the departed (shraddha-paksha) he helps in liberation from the debt to the ancestors. As the daughter goes to her in-laws after marriage her religious acts benefit the ancestors of the in-laws. After marriage, a woman is called a soubhagyavati. This word is derived from the word subhaga, su meaning good and bhag the vagina (yoni).

Righteousness (Dharma), wealth (artha) and desire (kama) are the three pursuits (purusharthas) to be shared by a husband and wife. The progeny will be good only if the couple is attached to one another, is righteous and dutiful. In the  sanskar of marriage, advice is given to the newly-weds to reduce their self-centeredness and to foster the emotion that they are a positive part of society.

Other objectives of marriage

At what age should a marriage be arranged?

According to the science of Spirituality: In the old days, after the thread ceremony at the age of eight, a boy would remain at his Guru’s home for study for at least another twelve years. Thus the parents would not think of getting him married till he was twenty years old. Thereafter the young man needs to develop the ability to sustain himself financially before entering the stage of the householder. After his  return from the Guru as a celibate (snatak) he would toil for four or five more years. Therefore twenty-five to thirty years was the age group considered best for marriage. In case of a girl too, the age range of twenty to twenty-five was considered as appropriate. During adolescent stage, a young woman spends  five to six years  in learning how to shoulder the responsibilities of running a household. This system holds good today as well.

According to physiology: A girl matures faster than a boy in both physical and psychological aspects. Marriage of a boy and girl of the same maturity helps both of them physically and psychologically. Therefore, the boy should be older than the girl by four or five years.

According to  general physiology: The ability to procreate is the highest in the age group of sixteen to eighteen years in a girl and eighteen to twenty-one years in a boy. To avoid over population, the law permits marriage of a woman  only after the age of eighteen and for a man  after twenty-one years of age.

Child marriages: This used to be  a popular custom. Sometimes  the wedding is held even after several years of the engagement ceremony (Sakharpuda).  In olden days,marriages were decided on the basis of the family (kul) to which the child belonged. Arranging a marriage based on the family background was a type of engagement by itself, and since it was common  practice to celebrate the wedding soon after the engagement, the custom of child marriages came into being. However, according to all the three sciences - Spirituality, psychology and physiology, child marriage is absolutely wrong.

A. The gotra (Lineage), pravar (Ancestral lineage) and the pinda

1. The gotra (Lineage): When arranging a marriage,  the gotra and pravar of both the families are first checked and if they match  then the horoscopes of the boy and girl should be matched. Gotra is the term used to denote the descendants of the eight Sages - Vishvamitra, Jamadagni, Bharadvaj, Goutam, Atri, Vasishtha, Kashyap and Agastya. There are millions of such gotras.

These gotras were divided into gans and the gans subdivided again into pakshas (groups), for example from Vasishtha gan were derived four pakshas - Upamanyu, Parashar, Kundin and Vasishtha. They have innumerable further subdivisions. Marriage within the gotra was prohibited.

A quote from the recent scriptures states that Kshatriyas and Vaishyas should be considered to be of the same gotra-pravar as that of their priest (purohit). This rule holds good only when they forget their own gotra..

Pravar (Ancestral lineage): Pravar refers to the ancestors of the gotras. They are one, two, three or five in number. The root “vru” from the word “pravar ” means to select; to accept. The words arsheya or arsha are used synonymously with pravar. Arsheyavaran means acceptance of one of the existing sects of Vedic rites (karma). This makes it clear that pravar represents the name of a founder sage of a sect following particular observances as ordained by the Vedas. Just as the word gotra represents learning (vidya), pravar is associated with a sect of karma. The authors of the Sutras have mentioned specific pravar sages for specific gotras, for example Vasishtha, Shaktya and Parasharya for Parashar gotra. Vasishtha, Maitravarun and Koundinya for Kundin gotra and Vasishtha, Bharadvasu and Indrapramad for Upamanyu gotra.

Pinda: ‘In order to avoid sexual promiscuity (yonisankar) in man who is generally  sexually oriented, the Vedic scriptures created the four classes (varnashramdharma) based on the qualities (gunas) and actions (karma) and later established the code of marriage to prevent the generation of interclass progeny (varnasankar). It was decided that with the exclusion of the fifth and the seventh generation, a man should accept as a bride (Panigrahan) a girl of the same class but of a different gotra (such as Atri, Vasishtha, Kashyap, Bharadvaj, etc.) and different lineage (asapinda). As the term sapinda is extremely important in the scriptures its description is essential.

Matching of horoscopes: When matching horoscopes the following eight aspects are taken into consideration - the class (varna), the matching of the lunar and solar signs (vashya), the lunar asterism (nakshatra), the species (yoni), the planets (grahas), the genus (gan), the lineage (kuta) and one of the three divisions of the lunar asterism (nadi). If all these eight match each other then in all, thirty-six attributes (Gunas) are said to match. When minimum of eighteen components match, the horoscopes are said to be matching. Deciding upon a suitable match by matching the horoscope is only a popular custom, and is not prescribed by the scriptures.

Shadashtak: Those star signs which are situated at six and eight places away from one another are known as shadashtak. Here there are two types, the friendship (maitri) shadashtak and the death (mrutyu) shadashtak. Their varying results according to the star signs are given in astrology.

Consanguineous marriage: Though the custom of consanguineous marriages is prevalent the world over and is also accepted, it is not sanctioned by the scriptures. In such a relationship however the groom has to be the sister’s son and the bride the brother’s daughter. In some communities in South India, there is a tradition of marriage of the brother’s son with the sister’s daughter.

One should also not marry inter-regionally, for example the bride should not be from the coastal region and the groom from the plains. Because of cultural and traditional variations the bride finds it difficult to adjust with the groom’s household.


Related links :
# Agnihotra: The solution to prevent effect of nuclear radiation!
# How do the colour and design of the clothes affect the person
# Largest Hindu temple on planet - Virat Angkor Wat Ram temple
# Why namaskar, not hand shake: Spiritual benefits of namaskaar
# Arrangement of Deities In Temple Room and Queries about Aarti