Sangh, Media and Internet : the facts remain RSS do not publicize themselves 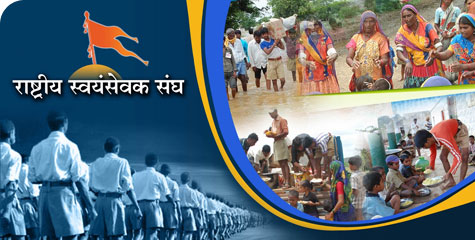 “Mr Agnivesh was almost like a MOLE” said KiranBedi in a tv interview. Many would be surprised and some would be shocked , but those on Internet and social networking sites are not. Almost all who have used twitter for last three months know about Agnivesh, his pro Maoist stand, anti-nationalism and his anti-Hindu attitude. The unfortunate guys realize things very late, indeed it is better to be late than never, but it is also better to know things early than late. This is only a recent example to show how internet and social networking sites helps us to know truth, and hence help us to fight evil.

If you do a poll on NarendraModi vs any PM candidate of any party, in internet, take it from me that modi will win hands down. It is only because, most of the internet users in India and abroad know the truth about Narendra Modi. They know what happened in 2002 and what is happening now .Truth can be twisted, suppressed , but it does come out from internet now a days.

These are the two examples which I would like to share with you, there are many other examples. Do you know about Barkha Dutt, ndtv group editor famous quote “Tell me what I should tell them”, do you know about Sonia Gandhi past and present , and many other facts which your newspaper and news channels deliberately hide from you. If you do not, please join us, if you have internet access, and enough time to dedicate for it.

I joined Twitter and Facebook, about one and half years ago, I know many friends of mine who use it for just having fun, some do flirt, and some wants to be in touch with friends. I am not at all against internet being used for these purposes, but as responsible citizens of this country we have the right to enlighten our fellow citizens, on how the truth is being twisted and suppressed by the media which they trust.

The twitter and facebook helps this purpose. I would like to share, a small incident, that happened in twitter, last September, a few days before RamJanmabhoomi judgement was pronounced, one senior Journalist, of CNNIBN , Sagarika Ghose, tweeted that ” whether Ram is a divine encroacher”. The outrage on twitter was so high that she had to delete the tweet, and ever since anyone who criticized her was called an “Internet Hindu ” and she alleged that all of us are being controlled from Nagpur, and are part of right wing extremist group, namely RSS.
Here is my point comes, I know RSS and the way it functions, many swayamsevaks work in real world, but still a senior journalist allege that RSS is controlling the tweeters and systematically attacking the liberals. But the facts remain RSS is yet to do lot on the media and internet. RSS do not publicize themselves, but there is nothing private about it. All it does is seen by the public, and their perception about RSS, is left to themselves. During the times of Guruji and Drji there were no media, not even television and only a few read newspapers. So even if they did not care about starting a media wing of RSS, the present generation of RSS leaders need to ensure, that they are having good communication with the masses.

Todays media, be it English or Hindi or even local channels, are funded by missionaries, and political parties. The news which come from these channels will always be anti Hindutva or they always attempt to show RSS in poor light. So it is very important that Sangh Pariwar should launch a national news channel, which will act as an alternative to these paid news channels. Delaying it will only help the rivals of RSS. But still some in SanghPariwar cannot digest this, for them there is a story from Ramayana.

In the war between Rama and Ravana, Agasthya was among the many sages who assembled to watch the mightly battle. Ravana, too, was a great warrior. Shri Ramachndra was worried. He did not know how to kill Ravana. Then Agasthya came forward and taught him the most sacred mantra known as the ‘Adithya Hridaya’. It was addressed to the Sun God. By chanting it three times Rama got the strength to kill Ravana. Then peace and happiness reigned on earth.

In this age of information technology, the manthra to defeat the pseudo secular propaganda against RSS is media and internet. Also listen to chanakya, “krithe prathikritham Kuryad”. For every biased news , we should show our side of news, “tatra dosho na patathi”, no sin in doing so, “Dushte Dushtam Samachareth.”