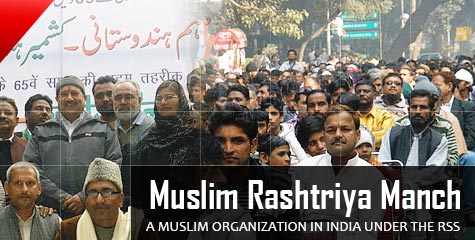 For over eight decades, RSS has been working for empowering India with a nationalist agenda despite all the calumny against it. A fresh example of the same has appeared with reference to Kashmir. Some would know that Indresh Kumar, a senior RSS functionary, who’s been with the RSS since 1959, had founded Muslim Rashtriya Manch (MRM), an organisation of nationalist Muslims with a motive to bring Muslims in national mainstream. Indresh Kumar, who graduated with highest honours from Punjab Engineering College in Mechanical Engineering, didn’t take up a job to serve the nation. MRM has been the result of his tireless efforts and commitment towards the nation. However, his efforts and accomplishments were never reported by the mainstream media. If at all they were reported, that was in a demeaning manner. MRM had in the past collected the signatures of a million muslims to oppose cow-slaughter. But terrified of the growing influence of an RSS functionary among Muslims, Congress led government tried to frame him in the Mecca Mosque blast case and used the CBI for the same. This all notwithstanding, MRM’s activities went on and on, and now, the results are showing bright and beautiful.

The occasion was culmination of “Hum Hindustani-Kashmir Hindustan Ka”, a unique campaign launched some three months ago by Muslim Rashtriya Manch (MRM), an organization of nationalist Muslims of India. During the three-month campaign the MRM activists conducted prayers in mosques, convened seminars and meetings all over the country. The campaign concluded at New Delhi on December 18 in which nearly 10,000 Muslims drawn from 23 states and 175 districts of India participated braving the chilling cold and dense fog to raise these demands.

Initiating the discussion Mohd Farooq from Srinagar categorically stated that the Article 370 was the main problem of Jammu and Kashmir. This article should be removed. Even the common people were in favor of its removal, he stated. He also blamed Sheikh Abdulla and Pt. Nehru for the problems of Kashmir. Mushtaq Ahmed Pir from Baramulla expressed that politics would not solve the problems of the people of Kashmir neither the problems would be redressed by raising the tricolor in Lal Chowk. A different approach needed to resolve and redress the issues blocking progress of the state.

Bashir Ahmed, who started his speech with ‘Bharat Mata Ki Jai’ stated demanded voting right for the refugees residing in Kashmir for the past six decades. Engineer Gulam Ali, who came from Bakkarwal community, blamed Sheikh Abdullah and Pt. Nehru for the present state of affairs in J & K. He said that the political leaders conspired against the Muslims of Jammu and heaped injustices against them. Demanding scrapping of Article 370, he added that this article helped only a handful of political leaders in the state. It has not done any good to the common masses, he added. Gulam Ali also demanded action on two resolutions adopted by the Parliament with regard to taking back the Indian territories forcefully occupied by Pakistan and China.

Halima, a sister from Kashmir called for steps to improve the economic condition of the common people in the state. Nazir Mir, who lost three of his brothers in terrorist violence said that political parties had been playing with the sentiments of the people. Denouncing the demand for ‘azadi’ Mir asked “who want ‘azadi’ when we are already ‘azad’?  He said that we were associated with the Muslim Rashtriya Manch and would remain so.

Mufti maulana Abdus Saami voiced similar sentiments regarding Article 370. He said that this constitutional provision was solely responsible the problems of the state. Stalwarts like Maulana Hasrat Mohani, Dr Babasaheb Ambedkar, Rafi Ahmed Kidwai had opposed the inclusion of Article 370. But Pt Nehru insisted on its inclusion and in the following years political parties were using this provision for playing their political game. He praised the MRM for raising the issues related to border security for the first time. He assured that the Muslims in India would associated with the MRM and work under the guidance from Sri Indresh Kumar.

President of Jamat-e-Hind said that this program was organized to insure progress of the nation. The situation in our border regions was serious even after sixty years of independence. The MRM was the first Muslim organization to raise the issue of border security. Abbas Ali Bohra from Bangalore said that Muslims in south India were in solidarity with the nationalist Muslims of J & K. He urged the Muslims to unite under the banner of the MRM and give a befitting reply to those anti-national forces active in the Kashmir Valley.

Dr Salim Raj, Chairman of Haj Commmittee, Chhattisgarh said that Muslims were always patriotic in nature. He blamed the Congress for defaming the Muslims. Tanveer Ahmed, President of BJP Minority Morcha reminded the people the history of Kashmir problem. He said that the accession of Kashmir with India was ‘full and final’ when the Maharaja Hari Singh signed the “Instrument of Accession” on 26th October 1947. The problem of Kashmir was created by Pt Nehru when he declared one-sided ceasefire and took the issue to the UN. Quoting Rafi Ahmed Kidwai he said that Pt Nehru and his Congress were responsible for distorting the culture of Kashmir. He demanded implementation on Parliament resolutions.

Imran Ismail, Corporator from New Delhi It was Indresh Kumar, who stepped forward for helping the widows of Kashmir on whose appeal he took 724 sewing machines to Kashmir. Similarly during the earth quake, again it was Indresh Kumar who took initiative to organize help to Kashmiri victims. Not a single Muslims leader came forward to help the Muslims in Kashmir, Ismail said raising questions over attempts to bracket Indresh Kumar in terrorist activities. He blamed the political leaders for misleading Muslims regarding RSS and Hindu organizations and its leaders like Indresh Kumar. These parties and leaders have created an atmosphere of doubt about the Muslims also, he said and added that this needed to be removed once again.

Dr J K Jain of BJP said that the demand for autonomy for Kashmir was based on wrong premises. The Congress and other parties were trying to divide the society by spreading falsehood and misbelieve against each other.

Indresh Kumar, Patron of the Manch, who could not make it to the program as his train was running behind the schedule, addressed the gathering on mobile phone. He blamed the government for playing dangerous game by blaming innocent Muslims and patriotic Hindus by falsely implicating them in terrorist activities in the country. Indresh Kumar said the anti-India elements and political parties were trying to mislead people in Kashmir. He also demanded scrapping of Article 370 which drove a wedge between people of the same land. This Article spread hatred and divided people. The MRM would carry forward this view to generate national and patriotic fervor in the country.  Referring to the presence of large number of Muslims from various parts of the country Indresh Kumar expressed confidence that this movement would usher in a new era of brotherhood, peace, love and mutual understanding  among the people of this country.

On one hand we have so called secular political parties who’re all hell bent on abusing the Muslims like a vote bank and woo them by offering reservation. They’ve already divided the Hindus in the name of caste. On the other, we have RSS and its sister organisations which are working to eradicate caste-system from India and also integrate Muslims into mainstream nationalism. Those who are familiar with RSS volunteers or are associated with the activities undertaken by RSS’ sister organisations, have utmost respect for RSS. Millions of families are there whose kids have got education in schools run by RSS. It is for the media to show the truth, but when Media is itself marred with darkness (recall, Neera Radia tapes), then the lack of a nationalist media haunts the people. The people who want to break the nation, for their vote bank politics, or the so called intellectuals and mainstream media people have created a thick air of calumny against RSS obstructing the view of the common people, who’re not in direct or indirect contact with RSS’ and its sister organisations’ activities. They need to look beyond this evil design