Killing of Hindu Leaders in TamilNadu/Kerala: Signs of a Malignant Social Tumor 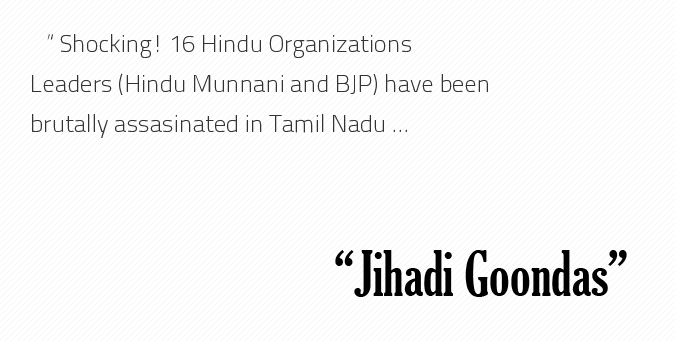 Shocking!! 16 Hindu Organizations Leaders (Hindu Munnani and BJP) have been brutally assasinated in Tamil Nadu over a period of 18 months

I was returning from my annual Pilgrimage to Shabarimala and had just passed Salem station by Kanyakumari-Bangalore Express, when I got a SMS from a friend from Coimbatore with the shocking news that Shri V Ramesh, General Secretary of Tamil Nadu Bharatiya Janata Party has been brutally murdered by “Jihadi Goondas”

In an incident earlier this month (On July 1st) Sri S. Vellaiyappan, Tamil Nadu State Secretary of the Hindu Munnani, was hacked and bludgeoned to death in Vellore. It is not a coincidence that he recently led a protest against take over of Jalakanteswarar Temple by the Hindu Religious & Charitable Endowments Department.

There are 14 other incidents during the past 18 months and many more across the state border in neighbouring Kerala. If someone thinks it is my attempt to communalize so be it. But let it be known that this based on confirmed news even from the Official sources from Tamil Nadu. With signs so clearly pointing towards such forces, I have no qualms in mentioning that rogue elements in the Muslim community have systematically targeted these leaders with active connivance of local authorities in carrying out their sinister acts.

When Sri Ramesh (Popularly known as Auditor Ramesh) became the 16th person to be martyred in a state (Check below for links of  various reports of other leaders Killed systematically) it did raise hackles of many and we cannot help but note with alarm, that there are some organized forces with vested interests, obviously Anti-National ones, working in a well orchestrated and determined manner. Proper impartial investigations in all probability reveal that this could well be  part of “Balkanize India” program of European/ American Conversion Factories with active connivance of UPA (Check my tweet link below)

What should raise our suspicions even further is that these leaders of organizations whose presence or influence is negligible in these states (It is apparently not, with benefit of hindsight) which only makes it even more baffling. Check @emanin‘s tweet below.

Remember, Kashmir issue started off supposedly as isolated incidents till such time the malaise was so deeply set and before long ethnic cleansing happened. The separatists and terrorist had their roots firmly entrenched and is now bleeding the nation. Unflinching desire of “The Family” to hold on to powers by hook or crook, even if the country has to be dismembered ensured that Army was let loose to fight with their hands tied at their back. As some wise man said, Kerala/TN is headed Kashmir way (in the same sequence). We need to build up pressure on the Authorities to tackle this menace in all earnest and bring the culprits to book – most importantly the Masterminds. Unless we uproot the Masterminds (including those of Italian Origins here), whoever it is, a malignant tumour would relapse. We cannot afford this and…

K. Murugan (45), former BJP municipal councillor, was returning home for lunch when the gang hurled pipe bombs and hacked him to death in broad daylight in the Paramakudi main bazaar – March 19th 2013

55-year-old Nambu alias Kuttainambu, secretary of the Hindu Munnani’s Rameswaram unit, was found dead with injuries in the head and chest caused by a boulder – July 7th 2013

M R Gandhi, BJP’s state executive member, was out on his morning walk when the four youths who followed him on two motorcycles, waylaid and attacked him with sharp-edged weapons [Link]

My (@surnell)  tweets on this subject

“Watch out! These assassinations are being written off as result of personal disputes. And some CONgi fanboys and fangirls celebrating it too” – Tweet

“Mark my words! These killings are part of “Balkanize India” program of European/American Conversion Factories. With active connivance of UPA” – Tweet

“Ignoring funeral of Party’s State General Secretary who has been martyred (yes, no less)!!! It couldn’t get worse than this ” – Tweet

“In the last 18 months, 16 Hindu leaders were killed in Tamil Nadu. What a shame! How could our intelligence fail so badly? ” – Tweet

“Some of these leaders were doing selfless service. It looks like a sinister plan and should not be taken lightly” – Tweet

Another ABVP leader murdered in Kerala, this time SACHIN GOPALAN

With Raids on PFI centres across North Kerala yields lethal weapons and foreign currency, the Kerala Police have now been able to expose the real face of terror of the religious outfit bolstering the apprehension that Islamic fundamentalists are waiting to spring a surprise in the state. (via Sri. Subash in his comments on this piece)

Kerala government informed the state high court that investigators have obtained evidence regarding the connection of radical outfit Popular Front of India, which allegedly launched a brutal attack on a college lecturer in July, with the Hizbul Mujahideen, Lashkar-e Tayiba and Al Qaeda.

The submission in this regard was made by by R Rajashekharan Nair, Deputy Secretary (Home) in a counter affdaivit filed in a PIL by Gireesh Babu seeking a ban on PFI and to handover the investigation on the attack of the lecturer to National Investigation Agency (NIA).  (via Sri. Subash in his comments on this piece)

Kerala’s Muslims have prospered largely thanks to the Gulf Boom, but over the past four decades the phenomenon has also led to an apparent spurt in extremist tendencies among the minority community, throwing up yet another paradox in a state known for paradoxes. (via Sri. Subash in his comments on this piece)

Kerala could be the next J&K, if we let the Jihadis continue radicalising the Muslims and funding terrorism in the state writes Dr Subramanian Swamy (Attributed) MUST READ THE DETAILS ON THIS LINK!!

Kerala Police confirms our worst fears – the terror face of Popular Front of India stands exposed. This is the time for all nationalists, Muslims included, to come forward and oppose this anti-Indian organization.

Kerala Chief Minister V S Achuthanandan on Saturday said the radical Popular Front of India (PFI), which hit the headlines recently after its activists were accused of chopping off the hand of a college lecturer, was aiming to convert Kerala into a “Muslim country” in the next 20 years.  (Shared by a dear Friend, Prashant)