Fog has its memories... #NetajiSubhasChandraBose 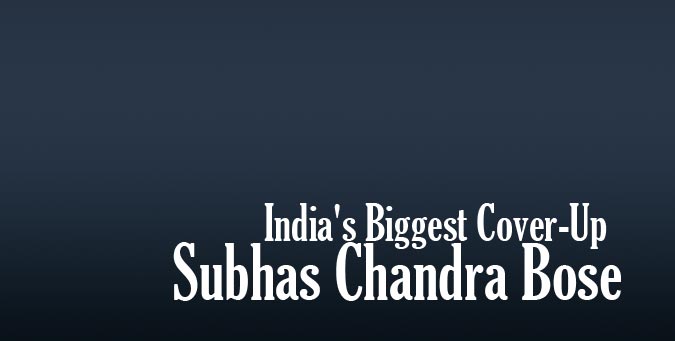 The fog was always there, long before the Union of India; long before the Britishers or even Marathas and Mughals before them came into being. It was there, as well, on January 23rd of 1897 when the man was born; and it was there almost five decades later when he disappeared into the ‘fog of war’.

65 long years have passed since our independence, but the fate of Subhas Bose is yet covered in the fog of our apathy and ungrateful treachery towards the memory of our nation’s martyrs. But fog has its own memories, the ones that are limited only by the imagination of men.

One can only imagine, as to why the government refuses to declassify the heaps of files and documents that may shed some light on his fate, even after 67 years when so much water has flowed under the bridge. Anuj Dhar, the author of “India's Biggest Cover-Up”, and his friends sought the answer for this from the government by filing Right to Information requests. Such declassification, says the government, will lead to a “serious law and order problem” in the country. It will have an adverse impact on the country’s foreign relations with certain friendly nations, they say.

I have asked around and nobody has been able to satisfactorily explain to me as to how an almost 70 year old instance in the history will strain today’s relations between two countries. We are all aware of the atrocities committed by the British government in India during the Raj. The afflictions of Jalianwala Bagh and the Bengal Famine are too well known. It is common knowledge that the British robbed us of all our wealth for centuries; that the Crown of today may become insolvent if it were made to pay pecuniary damages for everything it looted. All this does not affect India’s relations with the United Kingdom of today. It is as friendly and amicable as it could be.

Also, I fail to understand how the declassification of information pertaining to the Bose mystery will create ‘law and order’ problems. If anything, it will, in my opinion, be welcomed by the citizens of this country. It will only put an end to the widely popular conspiracy theories reviling politicians of the old and today, from Jawaharlal Nehru to Pranab Mukherji, that are, more often than not, swallowed without salt by the ardent admirers of Bose. An enquiry into the nature and content of these theories will be outside the scope of this article; but, suffice it to say, that such reluctance - nay, blatant refusal - on part of the government makes one wonder that there may be certain truth and reason in said theories. The only thing that can be stated with complete surety is that unless the government honours the memory of Netaji, the memories of the fog will continue to burn: our faith in the establishment, fueled only by our imagination.

No other country in the world have allowed such secrecy in such a matter. Take for example, the instance of Gordon of Khartoum. The British sent him to Sudan to address the Mahdist threat in the 1880s, but failed to answer his call for providing military assistance. The government’s reluctance and lack of political will caused the fabled Maj. Gen. Gordon’s death and the massacre of innocent citizens of Khartoum. The then government, to the best of my knowledge and understanding of the facts, did not make any attempts to disclose their faults; but in due course of time - sooner than later - the truth was told and Gordon’s memory found peace as his stature was restored to that of an English hero. The proverbial albatross was hung around the necks of the conniving and spineless politicians, for abandoning Gordon only to be slaughtered, and not on Britain as a nation. For there is a distinction that is drawn between a government and the nation that it governs. Governments come and go, but nations continue to live even after generations. The actions and beliefs of certain politicians need not be those of the government, and those of the government may not be in accord with the aspirations of the country in a prolonged run.

My ‘imagination’, then, runs amok and I wonder why, in spite of all this, the current government is trying to hide what may be the misdeeds of an earlier government! In any case, I am hopeful, that sooner or later they said records will be declassified. For Bose was a man who fled the CID, foiled the MI5, frowned the Gestapo and fooled the IPI; and at the risk making this all sound very hagiographic, I will say that it is very less likely that his memory can be buried under red tapism, bureaucracy and arrogance of the powers that be. The heavy allied propaganda machinery utterly failed to brand him as a quisling despite of herculean efforts that continued long after his disappearance. I am hopeful that the current government will also fail in its attempts of secrecy. Ultimately they must and they will yield to the prevailing public opinion which is in favour of declassification.

As you read this, using social media, Anuj Dhar is trying to gather support for carrying out a procession on this year’s birth anniversary of Netaji, demanding full release of all the classified material pertaining him that is in the government’s possession. I can only urge the readers to extend their wholehearted support to this cause.

“There is nothing that lures me more than a life … in search of the unknown... To this path I call my countrymen.” It seems that slowly, but surely his countrymen have begun to answer his call. If the fate of this ‘prince among patriots’ remains in the fog, unbeknownst, then I fear that our nation shall see no more men like him; and a world, less the likes of Subhas, will be a world that will return to the snow and sands.
by Prateek Mishra | Follow the Writer twitter.com/ENTprateek