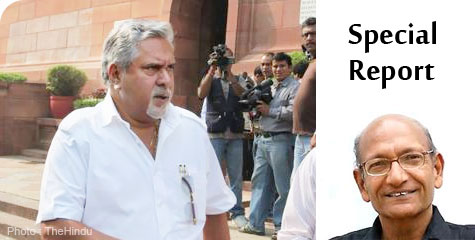 Politician and his family shall limit themselves to politics and not engage in business to curb the tendency to bend the rules. This is the way to control corruption, believes — Dr Bharat Jhunjhunwala

The list of corrupt politicians keeps on increasing. Bofors of Rajiv Gandhi, Harshad Mehta episode of Narsimha Rao, fodder scam of Laloo, Spectrum allocation by Raja, repeated change of tax rates by Mayawati, kidnappings by Naxals and ULFA and most recently allocation of land by Yedurappa are the prominent entries. This is not a new disease, however. Gandhiji was much disturbed about this and had suggested that the Congress Party dissolve itself and Congressmen become members of a non-political Lok Sewa Sangh.

Congressmen did not like the proposal-for obvious reasons. The problem is equally pervasive in foreign coutries. President Sukarno of Indonesia provided many concessions to his sons and helped them build a vast business empire. All major businesses of Tunisia are controlled by President Ben Ali’s family. African leaders are known to routinely siphon off 50 to 80 percent of aid into their personal Swiss accounts. Prime Ministers of Japan & Italy have had to resign amidst allegations of corruption.

The democratic system thankfully allows every person to contest elections and become a politician. Our Constitution has dismantled the birth-based caste
system that straight-jacketed persons into the traditional vocation of their family. Son of a Brahmin today is free to serve another and become a Sudra; and daughter of a Sudra is free to become a politician. A born-Brahmin may desire comforts of air-conditioners, cars and flat-screen TVs. To undertake fasts and penance is a veritable pain for him. He is, therefore, allowed to become a servant, serve his master and receive security in return.

There is difference, however, in adopting vocation of one’s choice and adopting two mutually contradictory vocations. Consider the vocations of politician and businessman. The politician cultivates goodwill of the voters whereas the businessman exploits them. Profits of the businessman are inversely proportional to the wages of the workers. The businessman is not afraid by the public outcry against his obtaining prime land by twisting the rules.

His eyes are fixed on the income from the land. Public acceptance or rejection is meaningless for him. Moneylenders mercilessly grab the pawned jewelry of a person who has landed in difficult circumstances. It matters little to him that people call him a butcher. He is happy holding the wealth in his safe. It will be difficult for such a moneylender to become a politician. He will suffer loss in his business if he adopts a soft stance towards the borrowers. On the other hand, people will not give him votes if he adopts a hard stance. The politician should, therefore, not engage in the business of money lending.

The politician has no sanctity for the words spoken from the mouth. Chanakya says in Arthasastra “A king who is situated between two powerful kings may
make peace with them on equal terms. Then he may begin to set one of them against the other and thus cause dissention between them. When they are divided, he may put down each separately by secret or covert means.” A treaty of peace made by a politician can thus be no more than a smokescreen of deception. On the other hand, businessmen strive their utmost to honour their word. Trust is the bedrock on which their business prospers. Consider the fate of a businessman who enters politics. He will be smothered by political opponents if he honours his words. On the other hand, his business will suffer if he changes his words. Similarly, it is beneficial for a politician to protect one who seeks refuge under him. But a businessman ever seeks to extract as
much as possible from a person who has come for assistance to him.

Conclusion is that combination of roles of politician and businessman is a sure prescription for collapse. Sanjay Gandhi tried to enter the business of making cars. The result was not good. When a politician, directly or through his family, enters business, there is a spontaneous tendency to twist rules in one’s favour. This leads to one’s political demise. Yedurappa listening?

This contradiction between roles in not limited to politicians and businessmen. Four varnas were made in our tradition on this basis. One who wanted to
secure the final truth was classified as Brahmin. He should speak honestly as King Harish Chandra. But such behavior was contra the role of a politician. Harish Chandra may have attained heaven but he lost his kingdom, did he not? Thus roles of Brahmin and Kshatriya cannot be discharged simultaneously.

Non-possession is prescribed for the Brahmin. Wealth is an obstruction in seeking of truth. It takes the mind towards worldly things. On the other hand, accumulation of unlimited wealth is considered to be the most laudable objective for the Vaisya. The two roles cannot be handled simultaneously. The Brahmin, Kshatriya and Vaisya all three live with uncertainty and new challenges every day. The Brahmin does not know wherefrom his next meal
is going to come. The Kshatriya is ever on toes from new threats to his empire. The Vaisya is continually threatened with new products and companies entering the market and undermining his business.

In distinction to these three, the Sudra gets security from his master. The sadhu running a grand ashram may not attain salvation, the politician may lose the election and the businessman may suffer loss but the Sudra employee gets his wages uninterrupted. An IAS officer serving the politician knows that salary will be credited in his account at the beginning of every month irrespective of who is the Chief Minister. But it is difficult for a Sudra to be honest. An IAS officer, for example, has to take wrong decisions or bend the rules as per whims of his political bosses. He cannot even enjoy the money gathered from bribes and has to invest the same at low rates of interest in No 2. Therefore, it is difficult for the Sudra to attain truth, power or money.

Our forefathers provided for four varnas due to these contradictions in the roles of seeker, politician, businessman and servant. It was provided that every person should choose one of the four objectives of life-truth, power, money or comforts-and live by the dharma of that Varna. We have done well in providing the freedom to each individual in determining his objective and choosing a vocation suitable to the same. But we have erred in allowing individuals to follow more than one Varna simultaneously. Thus we find sadhus contesting elections and setting up factories to make soft drinks and soap. Politicians are setting power plants and making real estate ventures. Businessmen are giving lectures in Sanskrit and becoming Rajya Sabha MPs. Result is that all these noble men are getting trapped in scandals.

The way to control corruption is to provide that the politician and his family will limit themselves to politics and not engage in business of any type whatsoever. They will then have lesser tendency to bend the rules and avoid getting into unsavoury scandals. We must amend our Constitution and require that every individual declare his Varna to his choice and then he be required to follow the corresponding dharma.