Going beyond self to all-expansive Self through Dharma 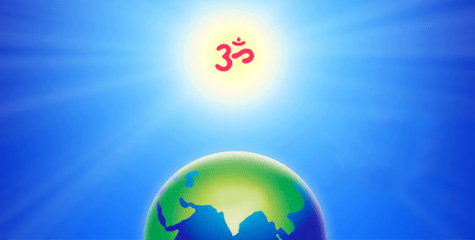 Education in present times teaches one to develop the self, physically and intellectually. The whole aim is to progress materially with scant attention to the spiritual aspect of life; this causes the rise of selfishness. There is more discord in relationships, marriages breaking up, children not respecting their parents, teachers or as grown up adults neglecting their aged parents.  It is common to hear of siblings at war with each other for inheritance of their parent’s property.  The main cause of this is the westernization of the people due to lack of understanding and valuing of our culture. Bharatiya culture emphasizes the importance of four main aims of life (Purusharths) i.e. Dharma, Artha, Kama and Moksha. Western civilization places importance on only two of these goals, that is, Artha and Kama and hence the focus on self which leads to the development of selfishness.

Saints have stressed that we should treat Dharma as our Guru. They repeatedly counsel us that instead of getting stuck in the Great Illusion (Maya) we should follow Dharma as our Guru, do our own individual spiritual practice (vyashti sadhana) and also  encourage society to commence spiritual practice as well (samashti sadhana). While doing so we should always have the goal of attaining the Final Liberation (Moksha) before our eyes, as only Dharma can lead us to it. In doing so we must realize that we need to rise above our individual self, as family is greater than self, and greater than family is the city and greater even than the city is the nation, but Dharma is even superior to the nation as only Dharma can lead us to the Final Liberation, while everything else binds us to the Great Illusion.  True spiritual progress can occur only when one becomes expansive mentally and one matures intellectually. Dharma makes us achieve this goal. Spiritual progress is possible by following Dharma.

When one experiences or has glimpses of all these sentences and grows spiritually step-by-step, this is known as living spirituality even while living in this world. To do so we should perform each action with bhav (spiritual emotion). If an action is done with bhav, then dissolution of the mind occurs, and if done in a paripurna (complete) manner, then dissolution of the intellect occurs.

Dharma teaches how to dissolve the mind, whereas righteous conduct takes the jiva beyond the action and karma, that is, to the awareness ‘I have not done karma’, this is known as dissolution of ego.

The benefits of doing karma with bhav is that, the jiva’s desires and attachments disappear while doing the karma. Manifestation of ego happens in the gross through actions (that ‘I have done the action’), whereas, from karma, it is subtle that is, at the thought level. If any karma is done in a bhavpurna manner, and if it is offered at God’s feet, then the emotional desires and attachment in the karma fall off, due to which the jiva obtains the fruits of pure karma in the form of collection of merits. Since it has Divine Consciousness, the jiva obtains true bliss from the karma.

Once the individual doing sadhana starts performing every activity with bhav and surrenders it to God, then his spiritual progress occurs.

The steps involved in the process are:

e. While doing samashti sadhana, his prembhav develops into priti: At this stage, his ego reduces and dissolution of the mind and intellect has already occurred. Thus the jiva progresses spiritually and encourages society to also progress.

On the other hand if the jiva does only social work for the progress of the Nation, there is no spiritual progress but also the danger of getting fame and the ego increasing. No doubt the individual gains merits for his good karma but these keep him trapped in the Great Illusion (Maya). If the jiva is stuck in social work with the aim of achieving nation’s progress, then his overall spiritual progress cannot happen; because social work involves emotions; hence, help from God is less. This activity also caters to the aspect of fame too.
Whereas, while striving for Dharma, the individual gets God’s energy and flourishes. By doing samashti sadhana there is a reduction in one’s ego and there is development of oneness with God’s samashti form, that is, all -expansiveness occurs. Through campaigns for the spread of Dharma and awakening of Dharma, the jiva becomes one with the samashti destiny. In the end, his ego dissolves and he becomes one with God’s samashti form, that is, he becomes one with all-expansiveness.

Only Dharma can take everyone to their final goal, that is, towards Final Liberation: Even though at various  stages, a  yog is superior, only Dharma takes us to the final goal of Final Liberation. Hence, instead of being stuck in the stages of Maya, one should keep the aim of attaining Final Liberation by making Dharma as Guru and do samashti sadhana. It is for this reason that, Saints have emphasised  the importance of Dharma.

Related links :
# Marriages are made in Heaven
# Largest Hindu temple on planet - Virat Angkor Wat Ram temple
# How do the colour and design of the clothes affect the person
# Why namaskar, not hand shake: Spiritual benefits of namaskaar
# Arrangement of Deities In Temple Room and Queries about Aarti