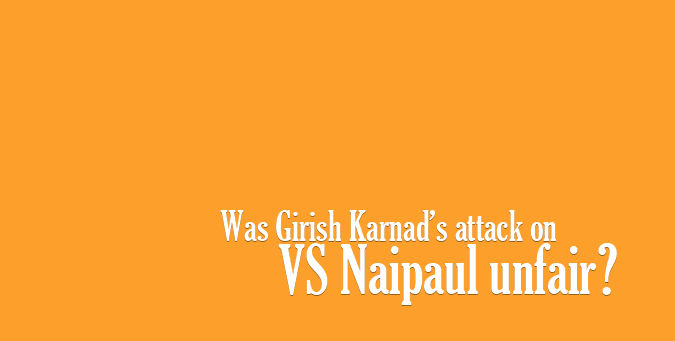 A deep personal animosity, symptomatic of a deeper anti-Hindu bias, was reflected in some recent, very heated, television debates centered round the writings of Nobel Laureate Sir Vidia Naipaul. To recapitulate briefly, Sir Vidia was being honoured in absentia at a literary event in Mumbai when Kannada playwright Girish Karnad unexpectedly unleashed a volley of verbal salvos at him and his writings, sparking off a huge controversy in the literary world. Though Naipaul was not without his admirers and defenders, there can be no denying that his critics had the louder voice and the greater media space; hence this article.

In the NDTV debate, Was Girish Karnad’s attack on VS Naipaul unfair?, (5 Nov. 2012 ) and subsequent discussion on Times Now, English author William Dalrymple and Girish Karnad lambasted Naipaul for what they called his ‘anti-Muslim sentiments’ (whatever that means). Karnad said some silly things such as Naipaul is not an Indian – alluding to the fact that he was born in Trinidad where his family went as indentured labour in the colonial era, and ignoring the fact that that country now hosts a large Indian community and that its present prime minister is a woman of Indian origin. But it is the suave Dalrymple whose arguments call for reflection. His animus towards Naipaul came out clearly in his exaggerated comparison of Naipaul with Ezra Pound’s fascism. Unlike Karnad’s diatribe this has deep roots.

At Times Now, writer Farook Dhondy, a friend of Naipaul, called the comparison disingenuous, a very charitable way of putting it, as despite his suave manner Dalrymple’s comment was simply vicious. In his television appearances, Dalrymple enumerated his longstanding criticism of what he called Naipaul’s dismissal of the contributions of Indian Muslims to the syncretic culture of India. Dhondy pointed out that Naipaul was referring to the invading barbarian marauders who came to India from the 8th century onwards until the final invasion by Babur in 1525. Dhondy should have mentioned the barbarism of the Deccan sultanate after the fall of Vijayanagar in 1565!

Readers may recall that Naipaul in an interview (The Hindu) mourned the passing of Hindu civilisation with the defeat of the Vijayanagar empire, the last of the great Hindu kingdoms in the south, a bastion of Hindu civilisation. He said, “I think when you see so many Hindu temples of the 10th century or earlier disfigured, defaced, you realise that something terrible happened. I feel that the civilisation of that closed world was mortally wounded by these invasions… The Old World is destroyed. That has to be understood. Ancient Hindu India was destroyed.”

Dalrymple quotes this without empathy in an article in the UK Guardian, ‘Trapped in the ruins’ (2004). Likewise, he quotes at the same site, Naipaul’s earlier statement that the first Mughal emperor Babur’s invasion of India “left a deep wound” on the Hindu psyche.

This cry from the heart irks Dalrymple, precisely because he is not a Hindu, whereas Naipaul is of Hindu descent, Karnad’s inanity notwithstanding. Why should an Englishman, now living in India and making a handsome living writing about India, take umbrage at this? The answer is twofold. Journalist Sheila Reddy writing for Outlook India, spoke of Dalrymple’s abiding love, the Mughals. This means that Dalrymple has set up his own binary oppositions, Hindu-Muslim – very British Raj indeed – and his own innate bias towards one community, which he expresses by downplaying if not downgrading Hindu sentiment. In this way, a spontaneous Hindu response to the fall of Vijayanagar is immediately distorted to mean ‘anti-Muslim.’

Dalrymple’s partisanship is best seen in his article in UK Guardian where, while acknowledging Naipaul’s greatness as a writer (which he can hardly discount), he dismisses Naipaul’s account of Indian history, notably that of the Vijayanagar empire. Ironically, Dalrymple himself is less than accurate:

For one, he states that Naipaul’s sources were early British accounts which spoke unfavourably of the Muslim presence in India in order to show how they (the British) by comparison brought law and order to the country. He cites R. Sewell’s Forgotten Empire (1900). Actually, these were not Naipaul’s sources; he relied on travellers prior to the British occupation such as Ibn Battuta (14th century) who recorded the glories of the city of Vijayanagar.

Secondly, Dalrymple airily claims there were ‘shifting’ political configurations in the Deccan, which presumably had nothing to do with Hindu Muslim conflict of the time. But the scholar S. Krishnaswami Aiyangar, departs from British and European historiography, has pointed out in two works that Hindu Muslim conflict motivated not only the Vijayanagar kingdom, but also that of the Hoysalas (Ancient India 1911, andSouth India and her Mohammedan Invaders 1921). When the Hoysala kings fell, they handed the torch over to Vijayanagar, which in turn handed it over to Shivaji and the Marathas. At all times, the aim was to drive out the Muslim sultans who were considered aliens and inimical to Hindu India. It would be intellectually and historically incorrect to deny that the invading forces were motivated by hostility to Hindu civilisation and Hindu rulers, though it is true that some Muslims rulers did engage in internecine warfare amongst themselves.

At the famous Battle of Raichur (1520), the illustrious Krishnadevaraya of Vijayanagar defeated Bijapur sultan Adil Shah and recaptured Raichur. At the height of his career, Krishnadevaraya fell ill and died; he was succeeded by Rama Raya. The five kings of the Deccan Sultanate (Bijapur, Golkonda, Ahmednagar, Bidar and Berar) joined forces to attack Vijayanagar and defeated Rama Raya after a heroic battle owing to a ruse. Adil Shah sent a note to Rama Raya saying that he was neutral, even while his armies were planning to attack. Further, a secret arrangement was made between the sultans and two defecting Muslim commanders of Rama Raya’s army who at a critical moment attacked from the rear. Rama Raya fell from his elephant and was captured by Sultan Nizam Shah. His head is severed, mounted on a pole, and displayed.

This ends the Battle of Talikota (1565). Thereafter, the plunder, ransacking and pillage of Vijayanagar went on for months, in fact almost a year.

For the next hundred years, the successors of Rama Raya and his brother Tirumala Raya (who had fled south after the fall of Vijayanagar) offered resistance to the Muslim rulers and prevented the Islamisation of south India. After this, Shivaji and the Marathas took up the defence of Hindu India and expanded the Maratha empire.

Historically, the Hindu Muslim conflict was not an incidental affair, but central to the era in which it took place.

Thirdly, Dalrymple admits that the first Muslim invasions produced some destruction, but claims it was not on the large scale Hindus claim it was. Here he opposes accounts by Hindu writers but does not produce any serious evidence from scholars other than Richard M. Eaton, author of Temple Destruction and Muslim States in Medieval India (2004). This was a response to Hindu writers such as Sita Ram Goel, Hindu Temples: What Happened to Them, 1990. Belgian scholar Koenraad Elst has contributed to this genre with Negationism in India, Concealing the Record of Islam (1992). In 2009, Elst responded to his numerous critics with, Ayodhya: The Case against the Temple (2009). Romila Thapar, whom Dalrymple quotes approvingly, has been roundly castigated for her attempt to whitewash Mohammed Ghazni’s destruction of the Somnath temple, Gujarat, in 1024.

Fourth, what most riles Dalrymple is Naipaul’s supposed failure to acknowledge Islam’s contribution to the ‘syncretic’ culture of India. On Vijayanagar he quotes Phillip Wagoner and describes him as a well known Sanskrit scholar, though Wagoner is a professor of Art History at Wesleyan College, USA, and not a Sanskritist. His work focuses primarily on the Islamic component of some of Vijayanagar’s architecture. Neither he nor Dalrymple have anything much to say about the great Hindu temple architecture that dotted the Vijayanagar landscape, mainly because of their lack of knowledge of Vastu Shastra and the elaborate traditions of the Hindu artisans. They are also not very sensitive to Hindu temple architecture.

While the Lotus Mahal may include arched gateways and vaulted ceilings, to call it purely Islamic in style, as Dalrymple does, is something of a stretch. And Dalrymple as noted above has nothing to say about the many Hindu temples that are clearly derived from Hindu Vastu Shastra and embody Hindu temple architecture and were numerous in the Vijayanagar kingdom, although as a nod to his thesis of syncretism working in both directions, he admits that in spite of the Islamic flourishes the architecture in general is Hindu in spirit!

Naipaul is right to call Vijayanagar an example par excellence of Hindu civilisation. The entire ethos was Hindu. The kings were Hindu. And the battles fought against the neighbouring sultans were a fight against an alien, invading occupying enemy. The two famous battles against the Bahmani sultans testify to the fact that the Vijayanagar rulers saw themselves as defenders of Hindu dharma and its upholders, until the final defeat in 1565, when the torch was passed on to the Marathas.

The question of syncretism did not occur to Naipaul since the overwhelming underlying base of all things Indian, whether music or arts or sciences was Hindu in origin. Since the time of the Sarasvati Sindhu civilisation and the Vedic Agama tradition, the civilisational flow was predominantly Hindu; the Islamic interregnum was a relatively short interlude in that flow of thousands of years. Many invaders had come and gone and left small footprints (one can call them syncretic); Islam sought domination, not merger.

Naipaul doubtless saw Vijayanagar as a valiant resurgence by an embattled civilisation; its fall affected him deeply. It is true that India resisted the religious domination of Islam despite the death and destruction of the early invasions and establishment of Mughal rule; elsewhere in the Gulf region, the indigenous traditions were destroyed within decades. Iran is a classic case. This cannot have escaped Naipaul’s attention.

Related articles ...
# Girish Karnad's Toxic Tantrums
# Denigrating Indian Culture: The Girish Karnad Way
# Are you Spending your Life Abusing Others Girish Karnad?
The modern apologists of Islam do not like such simple truths. They are of course enraged by Naipual’s negative observations of the iconic Taj Mahal, which he views as alien to the Indian landscape. Naipaul is not noted for pulling his punches, but in the end he does not appear to have said anything deliberately hateful or vindictive, whereas the diatribes of Karnad and Dalrymple are vicious and churlish to the extreme. It is not clear why Karnad launched the attack and why Dalrymple joined in the unbecoming polemics. What is undeniable is that Naipaul – who spoke not one word – came out best. That is always the case with the Great Maestros.

Vijaya Rajiva, The writer is a political philosopher who taught at a Canadian university | First Published in Vijayvaani | Follow twitter.com/vijayvaani