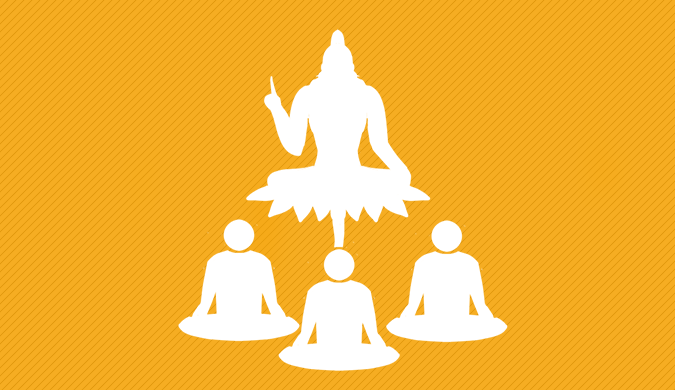 Amidst the debate and criticism of Baba phenomenon the concept that got tarnished is the ancient Vedic Guru-Shishya tradition of India. The current situation in the country has ignited widespread examination of the Babas and their instrumentality. Seems everybody is too enlightened to hold opinions on religion, spirituality, and mode of access to God. Media anchors who spend their days, months and years spinning the political arguments have suddenly become the experts on every faith, belief, and spiritual institution. With Times of India and Hindustan Times running headlines like ‘Baba Behind Bars’ and ‘Sex Crimes & Sieges’ have painted every institution and religious leader with the same brush. Media and the Westernized intelligentsia have been fast to coin words such as ‘Self Styled Godmen’ and ‘Dera Head’.

News channels are claiming to have done a great job by exposing the ill deeds of fake babas. While every news channel, their anchors and panelists are hell bent on proving that either devotees do not have brain or they don’t use it in when they follow Babas. They go to an extent of questioning as to why a person needs any mediator between him and God. What these news room people have failed to realize or have willfully ignored is that they are doing a serious damage to the Guru-Shishya Parampara the age old tradition of ‘Bharat’ by drawing parallels between fake Babas and genuine perceptors or the ‘Brahmveta Sadgurus.’

India is a land of seers and saints like Adiguru Shankracharya, Maharishi Aurobindo, Ramkrishna Paramhansa, Yogananda Paramhansa, Swami Ramtiratha, Chaitanya Maharprabhu, Gautam Buddh and Mahavir. Open any Hindu scripture and it starts with the salutation to the Guru. Can we actually burry the tradition of such enlightened Gurus and their disciples just because many fake Babas have cropped up to exploit the tradition. Or do we have the complete basis to label that ‘Brahmveta Sadgurus’ were only an occurrence in the past. However, saints like Maharishi Aurobindo, Ramkrishna Paramhansa, Yogananda Paramhansa and Swami Ram Tirath belong to the current era. Maharishi Aurubindo has been a lead crusader in the struggle for India’s independence.

I am quoting an excerpt from the foreward, written by Former Chief Justice of India Shri Ranganath Mishra, written on May 13, 1991, for the book The Guru Tradition by Adiguru Dakshinamurthi. The Former CJI has written that, “Guru according to Hindu way of thinking is an incarnation of God in human form for the Shishya. God is universal; the Guru is personal in the relationship. Education in the true sense enlightens the person undergoing the process. The inner eye does not open and learning does not get transformed into knowledge until the blessings of the Guru are showered.” Such is the belief and practice of Guru Tradition of India. It is important that we understand, as per Hindu Philosophy, who is a true Guru and why do we need one.

According to Hindu philosophy, a true Guru is a seer; who has had the direct perception of the spirit – the soul and can open the third eye of the seeker and show him/her as well. This definition is recorded in many scriptures including the Guru Gita, which says...

It means that I offer my salutation to the Guru who enables me to perceive (Darshitam) the hidden yet predominant God element in the cosmos.

Swami Vivekananda has said that “if there is God I must see him and if there is soul I must realise it.” It for this direct perception of the element of spirit within the human body and the realisation of the soul, that one needs a Guru.  And the one who does not give this direct perception or entangles one in outward performances and rituals is not a true Guru. Swami Vivekanand also exposed fake Gurus in his time of searching for a right one but the basis of those expose was the core question of the vedant philosophy that ‘Can you show me, God?’ It is the experience of the element of spirit, an element of divinity that makes a true Guru stand higher and distinct form of the fake and frauds.

While we expose the fake religious leaders and their unlawful activities that they do, we all need to tread cautiously. As we uphold the tenets of unbiased and verified news reporting and expose the frauds done in the name of religion we must also inform people as to what the true religion is. If one doesn’t know what true spirituality or religion is, then he/she must refrain from generalizing on related topics. We must tell the people who a true Guru is if we are embarking upon to tell who the fake Babas are. Those who are taking upon the duty to tell the reality of fake babas must also go into the detail of the Guru-Shishya Tradition and tell people that true and genuine Gurus also exist and how one must differentiate between the two. If we neglect this balance and paint every saint as a fake we would do a serious disservice to the spiritual identity and glory of India, which is known for its spiritual Gurus, the mystics, and the masters.