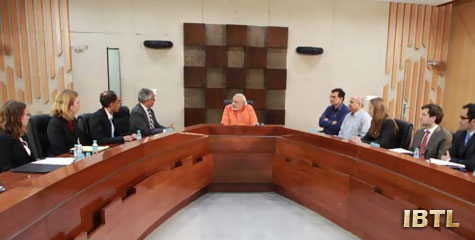 In a reply to a question from the students Mr. Modi said that India can not only compete but can also partner with China. Gujarat and China both are on top in manufacturing sector. But, at the same time both the regions are also developing partnerships. Many Chinese companies are now coming forward to set up their projects in Gujarat. Similarly entrepreneurs from Gujarat are also developing industrial relationship with China.

Chief Minister expressed his desire that the three major countries of Asia – India, China and Japan create their influence over world economy in 21st century.

In a reply to the question related to the strategy for curbing corruption Mr. Modi said Gujarat has adopted a strategy of policy-driven governance to keep corruption at bay. Biases do not have place in decision making as the policies are transparent. This helps to put a stop on corruption.

On a question on naxalism he said that economical and social inequality is not the only reason behind naxalism. The naxalism is emerging as Maoism in north-east regions of India and have its focus on seizing political power through weapons.

Chief Minister also gave outline of the state government’s work in education sector. The number of universities has increased to 41 from 11 during last decade. There are 12 universities which are taking new initiatives for human resource development, he said.

All the humanitarian forces should come together to fight terrorism. Unfortunately the country like USA is weighing India and Pakistan with different scales in the matter of terrorism. The terrorism does not have any religion or community. Zero tolerance is required to check it, he said.

Gujarat is emerging as a model for growth polity and it is an answer to all the problems India is facing currently.